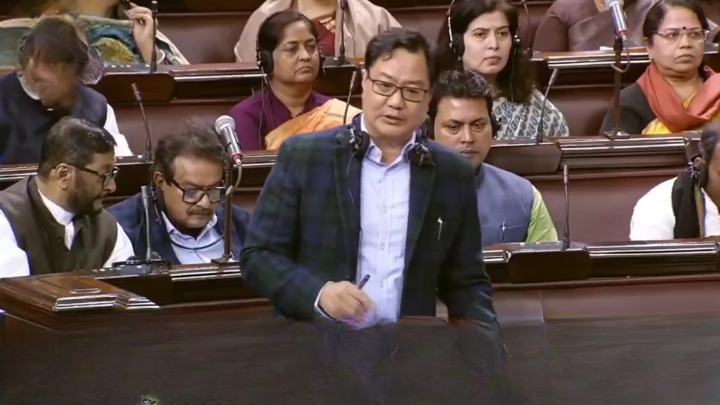 Prime Minister Narendra Modi is silently, and certainly irreversibly, moving towards his goal, to transmute the basic identity and character of Indian judicial system. There are many aces on his chess board, but the Union Law Minister Kiren Rijiju is a rare exception to perform the task more diligently.

In his exuberance to please his boss, Rijiju even did not bother of his own repute and credibility when he shared old photo with tweet on Tawang. With Bharat Jodo Yatra catching the imagination and psyche of the common people and the mover of the BJY Rahul Gandhi being viewed as a better alternative to Modi, panic has gripped Modi and his close confidants. His latest remarks on the India-China border dispute has simply unnerved them. Modi is sceptical of the disastrous effect this would have on his nationalism plank.

In this backdrop Rijiju has taken upon him the onerous task to insinuate and prove Rahul wrong. While he accused Rahul of insulting the Army and damaging India’s image, he tweeted a photograph of himself with soldiers, saying that Yangtse in Tawang was “fully secured now” with “adequate deployment” of army personnel. But unfortunately for him the photo is old taken in 2019.  Congress media chief Jairam Ramesh slammed the minister as a “Shameless Distorian”. On Friday Rahul had said that China was preparing for a war and accused the Indian government of being “asleep” and ignoring the threat.

What has been really shocking is Rijiju who has been cautioning the people against the menace of fake news and rumours has himself resorted to this design. machination. It was in July 2018 he had said; “State governments and all government agencies, along with NGOs, need to come together and create better awareness. Rumours and fake news are posing a danger to innocent lives.” The urgency of political survival has become so frantic that he forgot his own advice.

Undeterred of his shot falling short of target, Rijiju continues with his prime assignment, which is to yet to be accomplished is to turn the judiciary into a non-existential soul notwithstanding some of the former judges pledged their moral obligation to him. Modi has made every institution subservient but the only exception has been the judiciary.

Notwithstanding the Chief Justice of India Y V Chandrachud has making it clear in so many words that they would continue with the collegium system, Rijiju reiterated his official stand; “it was not correct for the Supreme Court to scrap the National Judicial Appointments Commission Bill (NJAC). New system to appoint judges is needed.” If the mood of the BJP leaders is any indicator of the things to come, Rijiju may make a move to revive the NJAC. If the party insiders are to be relied, the top leaders nurse the view that it must be achieved well before the 2024 Lok Sabha elections. They feel that any delay would see the situation going out of grip. The moves of the Supreme Court has turned them sceptical.

The lack of judicial prudence and also the urgency to saffronise the judiciary was clearly manifest in the remark of Rijiju made in Parliament; “the Supreme Court should not be hearing bail applications and rather hear constitutional matters. If the Supreme Court starts hearing bail applications and starts hearing all frivolous PILs, it will definitely cause a lot of extra burden on the Honourable Court, because Supreme Court by and large is treated as a Constitutional court”.

An insight into Rijiju’s remarks makes it imperious that it is loaded with dangerous implications. Of late the apex court has been granting bails to the people who have been in jails for years even without trial or filing of charge sheets. This is much to the chagrin of the rulers. Second but the most important has been it would discourage the saffron hitmen and vigilantes from lodging frivolous and fictitious cases against anti-RSS and BJP activists. Their simple intention has been to let these pro-people languish in the jails. Already the district and lower courts are under pressure from these saffron vigilantes to obey their dictates.

Nonetheless within 24 hours of this diktat from Rijiju, the Supreme Court exposed its fallacy and triviality. While CJI D Y Chandrachud rebuffed his argument in an assertive tone; “No case is too small for the Supreme Court. if we do not act in matters of personal liberty and grant relief, then what are we doing here?”. The CJI in a way linked the “ so called small cases” with the liberty and rights of the people.

Incidentally on the same day he granted bail person who has been ordered to undergo consecutive sentences to the tune of total 18 years for the theft of electricity.  “it is absolutely shocking case”, observed the bench comprising CJI Chandrachud and Justice PS Narasimha. The person was implicated in 9 cases and in each case he was asked to serve 2 year jail. He had already completed 7 years of sentence.

The appellant approached the Supreme Court after the Allahabad High Court refused to order that his sentences should run concurrently. “If the Supreme Court is not to interfere in this matter, what are we here for? If we don’t interfere in matters of personal liberty, and we don’t order the release of this person, then what are we here for. We are then acting in breach of Article 136 of the Constitution”, CJI Chandrachud said.

With this one major move to trample the personal right and liberty got foiled. The right to personal liberty is an inalienable right. In attending to such grievances, the Supreme Court performs its duty. There is no doubt if the apex court had not intervened then it would have amounted to miscarriage of justice. Let people framed in baseless cases rot in the jails would have become the judicial norm. Noted lawyer Prashant Bhushan was right in saying that Rijiju’s comment showed the “anti-liberty mindset” of the minister and the government.

Rijiju also made one very abstruse statement. While saying that more than 4.25 crore cases were pending in lower courts, he said; “we have to also ask judiciary to ensure that the deserving people are given justice and those causing unnecessary burden are taken care of, so that they don’t cause disturbances while the court is functioning or the court is discharging its duties.” Will Rijiju make clear what he means when he says “those causing unnecessary burden are taken care of”.  Does not it aim at terrorising the people?

Recently in a challenging tone Rijiju had said that no one can say that government has not cleared the appointments. He has also been harping on the pendency of cases. If he is so concerned of the correct and prompt delivery of justice, why his government has not been increasing the number of judges?  He has simply been asking the courts to increase the number of judges. But is unwilling to increase the budget and infrastructure. Participating in a debate in the Parliament last week Rijiju postured as a victim. He lamented government’s lack of say in the appointments of high court and Supreme Court judges.

Only last week the Supreme Court had declined to direct the Modi government and the states to double the strength of judges, pointing out that the collegium was not in the position to fill the existing vacancies and expand infrastructure. Apparently rebutting Rijiju’s observation the CJI D Y Chandrachud said “These are all populist measures which you are suggesting. It is difficult even to fill the 160 seats in Allahabad High Court and you are asking for increasing the strength to 320!”

The Supreme Court has cautioned the government that it  would pass “judicial orders” if the government sought to “cross the Rubicon” by continuing to sit over recommendations on judicial appointments and transfers despite reiterations by the collegium. The nature of the anguish the court had to undergo is manifest in its telling Attorney General R Venkataramani; “How does the system work? Our anguish we have already expressed. It appears to me, I would say, unhappiness of the Government of the fact that NJAC does not pass the muster. You are effectively frustrating the method of appointment”. (IPA Service)

Division Among Tribals In Tripura Has Special Significance For 2023 Polls