Division Among Tribals In Tripura Has Special Significance For 2023 Polls 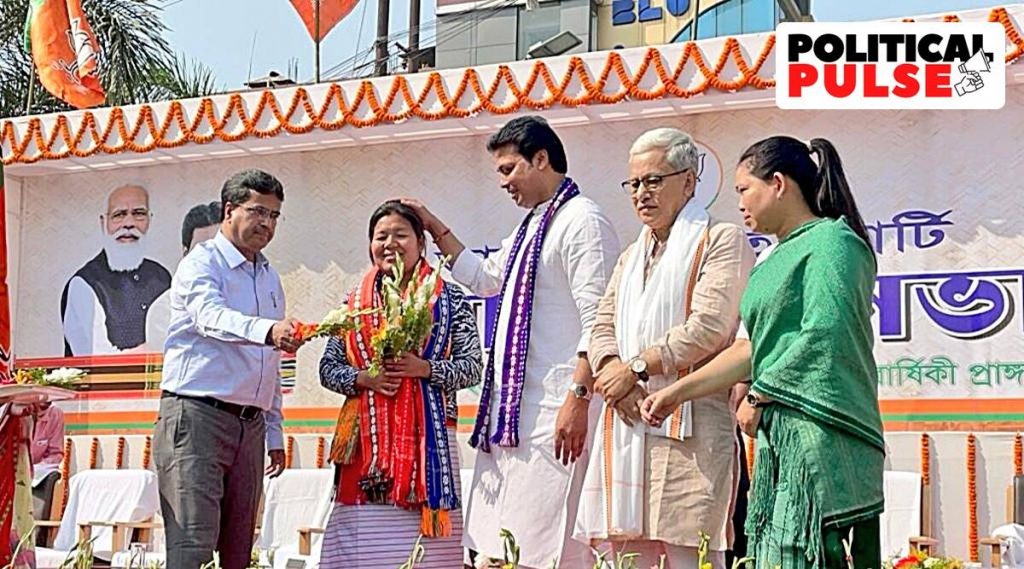 As the pre Assembly poll campaign warms up in Tripura, the state seems to be heading for a sharper ethnic divide in 2023 between the majority Bengalis and native tribal groups. New poll entrants Tipra Motha (TM) fighting for a greater separate Tripura (Tipraland) state, have confirmed the worst fears of the ruling Bharatiya Janata Party (BJP) by calling for a greater tribal consolidation .

It has appealed to BJP’s tribal ally Indigenous Peoples’ Front of Tripura (IPFT) to support and join the movement for separate statehood. The state BJP unit has not been particularly surprised, its leaders had earlier expressed their anxieties about the TM’s political motives. There has been no immediate reaction from the ruling BJP which has already announced plans to maintain its present alignment with the IPFT and ruled out any understanding with the TM.

In 2018 the BJP got majority for the first time in the state assembly polls along with its ally IPFT defeating the Left Front. The isolation of the CPI(M)  from the tribals led   to   the defeat  of   the  Front. The tribals constitute 31 per cent of the population of Tripura..

In recent times, Tripura has undergone spells of sporadic political violence, but the TM’s tentative initial steps have not been provocative. Non tribals and Muslims have been present in significant numbers at its mass meetings. TM leader Pradyot Debbarma has taken care to insist that the party is not targeting non tribals in any way. It will pursue its objectives in the Constitutional way.

Its approach so far remains a contrast with the more aggressive assertion shown by the IPFT, which also conducted an agitation for separate statehood some years ago. There had occurred much tension and some violence at the time. Its alignment with the ruling BJP has somewhat blunted the earlier sharper edge, of the IPFT’s agitation for separate statehood following its participation in the process of administration and governance.

Understandably, there has been noticeable support for the TM according to Tripura-based media reports, among the new generation of aspirant tribal youths, most of whom are as a rule more proficient in the use of English not to mention the internet, than their older family members and relatives.

The recent victory of the TM in the Tribal Autonomous district council elections, where the party won an impressive 18 out of 28 seats, with an aggregate vote share of47% was a clear sign that the new outfit could not be taken lightly by other political rivals, especially by the IPFT.

Under the 6th schedule provisions, the Tripura Autonomous tribal district council enjoys considerably wider powers than similar autonomous bodies anywhere in the Northeast. In part, the credit goes to the CPI(M), which was ruling the state earlier, as it dealt far more generously with long standing tribal sentiments and demands than most ruling parties, under the astute leadership of veteran leaders Dasrath Debbarma and Nripen Chakravarty.

In recent times, even as they renew their bid to win back power they lost to the BJP in 2018, the CPI(M) and its allies , according to observers, are feeling a bit sidelined. The unexpected defeat of Left Front Government under Chief Minister Mr Manik Sarkar, despite his personal integrity, continues to rankle..

The spate of centrally sponsored infra-related connectivity schemes, new rail and road development projects and trade linkages with Bangladesh have certainly taken Tripura’s economy to a new level. The Central Government has also helped reduce travelling tome between Tripura and west Bengal by helping arrange better communication through Bangladesh. This has helped the BJP in launching an aggressive ‘pro-development campaign’.

Its domestic governance record, according to the CPI(M), the Trinamool Congress (TMC) and other opposition parties, has been wretched. Democratic norms have been brutally violated, elections have been forcibly rigged and opposition candidates were not allowed to carry on their poll campaign in the recently concluded civic elections.

The state police has been used in a partisan manner. While corruption in general has risen, during and after the Corona pandemic, economic distress in both urban and rural areas also increased, as the state government failed to provide much relief to common people.

The BJP has much to answer for especially among hard pressed common people who paid the price for unemployment and a drop in their incomes, while ruling party-backed anti socials were allowed to flourish’ has been the broad theme of the opposition-sponsored campaign so far.

The other major concern among both opposition as well as ruling party circles is whether a potential consolidation of the tribal vote bank, would lead to a similar coming together among Bengali voters in the state, by way of a reaction. In the Northeast region as a whole, political loyalties have been often dominated by considerations of their ethnic origins and local history, among voters. Opposition parties fear that the BJP might win an advantage if this were to happen.

State BJP leaders point to the example set by Assam Chief minister Hemant Biswa Sarma in this context. Once seen as an Assamiya hardliner in matters relating to the status of Bengali Hindus and Muslims in Assam , as a chief Minister he has gone out of his way to accommodate the fears of common people in Bengali-dominated Barak Valley areas and also encouraged local economic development.

Therefore the tribals, BJP leaders insist, should have no fears of being sidelined in Tripura now or in the future. (IPA Service)