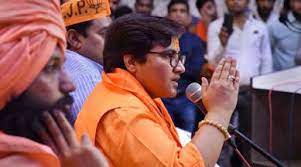 Congress leader Jairam Ramesh on Tuesday said BJP MP Pragya Singh Thakur’s remarks at a function in Karnataka’s Shivamogga are a clear example of hate speech and he would move the Supreme Court against her.

Ramesh said he would file a case against Thakur in the apex court as the police in Karnataka would not act against the Bharatiya Janata Party (BJP) MP. Karnataka is currently being ruled by the BJP and the Assembly polls are due in the state early next year.

“BJP MP Pragya Singh Thakur’s remarks made in Karnataka are a clear example of hate speech and I would be moving the Supreme Court against her for making such remarks,” the former Union minister told PTI.

He said Thakur’s remarks clearly seek to divide the society, while claiming that the local police would not act against her since the BJP is in power in the southern state.

Thakur said Hindus have the right to respond to those who attack them and their dignity as she spoke about the killing of Hindu activists.

She also called on Hindus to at least keep the knives in their homes sharp, as everyone has the right to protect themselves.

Speaking at the Hindu Jagarana Vedike’s southern region annual convention at Shivamogga on Sunday, the BJP MP from Bhopal in Madhya Pradesh told the gathering to give a befitting reply to anyone who “infiltrates our house”.

“Keep weapons in your homes. If nothing else, at least keep the knives used to cut vegetables sharp…. Don’t know what situation will arise when…. Everyone has the right to self-protection. If someone infiltrates our house and attacks us, giving a befitting reply is our right,” she said.

“Love jihad. They have a tradition of jihad. If nothing, they do love jihad. Even if they love, they do jihad in that. We (Hindus) too love, love the god, a sanyasi loves his god,” Thakur said.

Speaking at the function, she also said, “A sanyasi says that in this world created by the god, end all the oppressors and sinful. If not, the true definition of love will not survive here. So answer those involved in love jihad the same way. Protect your girls, teach them the right values.”