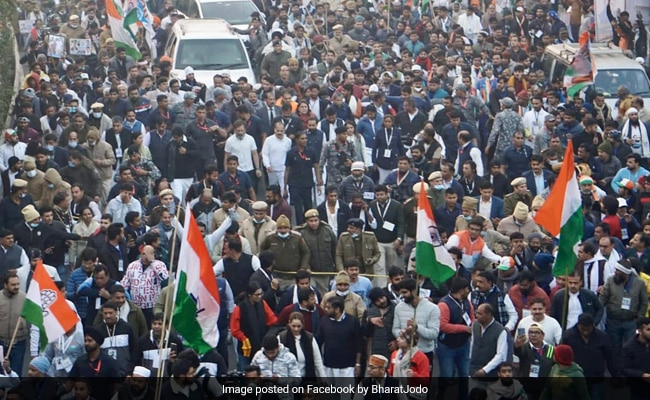 Bharat Jodo Yatra entered the northern state of Punjab on Wednesday with the message of love trumping hate.

The anxious Punjab Police had to eventually request Rahul Gandhi to delay the Yatra by an hour in the morning, as temperatures plummeted below 10℃ and dense fog blanketed the state reducing the visibility down to 500 metres. He conceded amid security concerns and the Yatra, which otherwise begins at 6 am, started out at 7 am from Fatehgarh Sahib Gurdwara to cover its 25-km stretch for the day.

“It is not a big feat,” said Gandhi on walking 3,300 km on foot across the country. “Every farmer in Punjab walks more than us, as he goes to his farms and then to mandis,” he said during his rally from Sirhind before briefly addressing the supporters.

Clad in red turban and his trademark white T-shirt, the 52 years old Gandhi walked through the Punjab town with other Congress leaders from the state. Just a day before, he had flown to Amritsar to pay obeisance at the Golden Temple, and returned to Sirhind for the foot-march.

Gandhi was accompanied by Congress Chief Raja Warring who remained by his side throughout the day, along with former CM Charanjit Singh Channi, and leader of opposition Partap Singh Bajwa. Former Haryana CM Bhupinder Singh Hooda left after he handed over the flag to Warring as the Yatra ended its Haryana-leg. Gandhi was joined by several other leaders, including former AAP MP from Patiala Dharamvir Gandhi who had come to extend his support to the cause.

Despite tight security, Gandhi met people on the way, many ex-servicemen and farmers several of whom had travelled from across the state to join the leader on the foot march. Some were ferried by Youth Congress leaders in buses which made their way through the jammed National Highway (NH)-44, and road closures slowing down other vehicles for several kilometres. Large colorful boards installed along the highway welcomed Gandhi to the state, with people walking holding the tricolor. The sounds of Dhols reverberated through the air, as a cultural Punjabi troupe performed at one of the stop-overs.

The nation-wide Yatra that started out in the scorching summer from Kanyakumari on September 7 has now entered its last leg. It has already covered Kerala, Tamil Nadu, Karnataka, Maharashtra, Madhya Pradesh, Rajasthan, Uttar Pradesh as well as Haryana. Over the next week, it will travel across Punjab from Khanna in Ludhiana to Jalandhar, and reach Jammu and Kashmir via Himachal Pradesh. It will conclude in Srinagar on January 30.