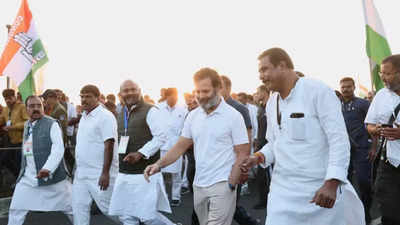 BHOPAL: Despite being the BJP’s bastion, Rahul Gandhi’s Bharat Jodo Yatra is getting a good response in Madhya Pradesh. The most enthusiastic welcome was accorded by Indore whose corporation is controlled by the BJP. Besides majority of MLAs and Lok Sabha seats is represented by the BJP.  The Rahul yatra entered Indore in the morning of November 27 from Mhow which happens to be the birthplace of Dr. B R. Ambedkar.

After saluting Dr. Ambedkar Rahul left Mhow at 6 AM. He walked Indore for eight hours and won the heart of residents when he complimented them for keeping “Swatch” the city. He told the Indore residents “Today we walked for around eight hours on Indore roads. I looked at every corner but did not find any garbage. I want to thank the people of Indore and the sanitation workers for winning six prizes (as the country’s cleanest city)” he said.

Indore’s history shows it is a ‘centre of justice’ he remarked. Apart from cleanliness he said he found “brotherhood on the roads of Indore”. On these roads, Hindus, Muslims, Sikhs, Christians along with elderly persons and people speaking different languages have walked (with the Yatra) and there was not hatred” the Congress leader said.

He addressed two public meetings during his stay in Indore. Addressing a massive meeting at historic Rajwada Rahul said that Congress MPs tried to raise in Parliament pressing issues like agri-loan waiver, the three farm laws, demonetization and wrong GST several times but every time their “mikes were turned off”.

To the media he said “Pay no attention to these issues, only show what Aishwarya Rai wears, Sharukh Khan says and the cricket match’s results”. The yatra on Sunday resumed from Dussehra Maidan of Mow at 6 am and halted for lunch at 10am at Rau after covering 12 km. The second half of the yatra started at 3.30 pm and went through Rajendra Nagar Bridge, Chanakyapuri square, Manikbagh Bridge, the collectorate, Harsidhi Mandir and Gandhi Bhawan to reach Rajwada. The entire route was decked  with large posters and banners of Congress leaders.

Central Reserve Police Force (CRPF), which is giving round the clock security cover to Congress leader Rahul Gandhi during his ongoing Bharat Jodo Yatra, had found crowd in Madhya Pradesh to be ‘uncontrollable ’ prompting the officials to increase number of personnel on Yatra duty in the state.

“In the states like Tamil Nadu, Kerala, Karnataka, Andhra Pradesh and Telangana, the crowd was very disciplined. People were seen lined up alongside roads and following instructions of their local leaders’ a senior CRPF officer, who had served for more than 25 years, told the media persons. He said that CRPF, which is providing 24×7 security cover to Gandhi, had to ‘struggle’ a bit as Yatra passed through Hyderabad city while similar ‘difficulties’ were faced in  parts of Maharashtra.

“The situation in Madhya Pradesh is, however totally opposite to what we experienced in southern states. The crowd here is ‘uncontrolled’ and does not follow instructions of any leader. We have increased number of personnel multi-fold in Madhya Pradesh than what we started the Yatra with from Tamil Nadu” he said.

The Yatra is set to start its Rajasthan leg from December 4 and from there it would proceed to Jammu & Kashmir via Haryana, Uttar Pradesh , Delhi and Punjab.“At present the Yatra is  in Madhya Pradesh but CRPF has completed security screening of routes and camping spots along with the venues, where Gandhi is proposed to visit in Haryana” he said.

According to a senior CRPF official, they have a separate and advanced communication system to stay connected with each security personnel and keep a close vigil on every movement,. Besides the CRPF personnel carry advanced arms and other equipment required to ensure fool proof security cover to VVIP. The security cover is further enhanced by a two layer cove provided by local police.

Ramesh said that BJP was not talking about issues this Yatra is raising like inflation, economic disbalance, spreading hatred, fear and violence but only about containers, Gandhi’s beard, T shirt and son on just to divert people’s attention from real issues.

Rahul Gandhi on Sunday morning rode a Motorcycle which was specially modified by a dog lover to join the Yatra with his pet from Burhanpur to Kashmir.  Gwalior based civil engineer Rajat Parashar said that he along with his friend Sarthak Singh reached Burhanpur on November 23 and started following the Yatra on their specially modified motorcycle. “We have  completed a journey from Kashmir to Kanyakumari around eight months ago”. they said, adding that it was their second journey on the same route with their pet Marvel, but learning about the yatra they took a halt in MP to meet Gandhi. “We finally met Gandhi, who also rode our motorcycle and walked with our pet Marvel to some distance. He appreciated our cause to save street dogs” he said.

Before leaving Indore, Rahul Gandhi addressed a press conference In the course of the press conference he turned somewhat philosophical when he said “Let go of Rahul Gandhi. I let go of Rahul Gandhi years ago. He said personal attacks give me strength. He avoided political questions but answered about political crisis in Rajasthan. He asserted both Gehlot and Pilot are assets to Congress. He was confident that the controversy would not impact the Yatra. He paid compliments to the people of Madhya Pradesh saying that public response of Madhya Pradesh is ahead of all state. This Yatra had entered in depth in the minds of people of Madhya Pradesh. He ruled out entry of Scindia and his followers in Congress. “Those who sold themselves are not welcome” he added.

State BJP chief V. D. Sharma reacting to Rahul Gandhi’s comment that GST is more dangerous than Chinese army said “it is clear now that Rahul Gandhi’s Bharat Jodo Yatra is actually Bharat Todo Yatra.   But the mood in the BJP headquarter is  of deep worry taking  note of the response. The assembly   elections    are    due   in 2023 in the   state. The Congress workers are feeling rejuvenated. State Congress president Kamal Nath is making all efforts to   take    full   political    advantage   from the Yatra.. (IPA Service)