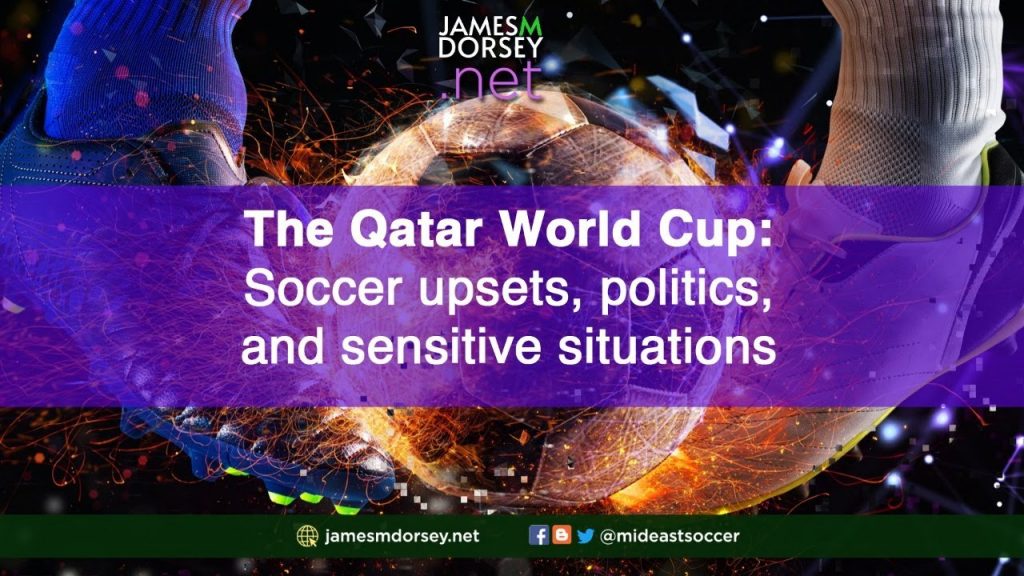 Barely out of the starting blocks, the Qatar World Cup has already produced a fair share of upsets as well as politically and personally sensitive situations and incidents.

Qatar’s 2:0 loss to Ecuador in the tournament’s opening match will have reinforced critics’ conviction that the Gulf state should never have been awarded World Cup hosting rights, among other things, because of its alleged lack of a soccer legacy.

Leaving aside the merits of the allegation and Qatari disappointment, the jury remains out on what Qatar’s return on its massive investment in organising the World Cup will be regarding reputational capital.

For Qatar, the ultimate evaluation of the return will largely depend on how it manages the tournament and potential flare- and hick-ups as dissidents try to turn Iranian matches into venues of protest, activists seek to capitalise on the opportunity to campaign for their cause, and fans refuse to play to Qatari soft power objectives, let alone possible incidents of intoxication, rowdiness, and LGBT-related issues.

So far, the picture constitutes a mixed bag.

Similarly, to prevent matches from turning into platforms for protest, Qatar stopped Iranian fans from bringing Iran’s pre-revolutionary flag into the country’s first World Cup match against England. The flag, dating from the time of the shah, toppled in the 1979 Islamic revolution, is viewed as a symbol of protest against Iran’s theocratic government.

That didn’t halt fans holding up signs in the stadium demanding freedom in Iran and pictures of demonstrators killed by security forces.

However, there was little Qatar could do when the Iranian national team refused to sing the country’s national anthem at the beginning of the game.

“I would like to express my condolences to all bereaved families in Iran. They should know that we are with them. And we support them. And we sympathize with them regarding the conditions,” the team’s captain, Ehsan Hajsafi, told journalists hours before the match.

While Qatar’s state-run domestic broadcaster avoided showing female supporters with their hair uncovered in the stadium, Iranian state television interrupted its live broadcast as the Iranian and Ecuadorian anthems were played.

For weeks, footballers have signalled support for the protesters by not celebrating Iranian League goals, wearing black wristbands, and expressing support for the Iranian people without mentioning the protests to evade government retaliation.

Nevertheless, current and former players have been questioned by authorities, detained, or charged with “acting against national security.”

The refusal to sing the national anthem and the team’s embarrassing 6:2 loss to England fed the Iranian government’s worst fear that the World Cup would turn out to be a global platform for dissent rather than a moment of unifying national celebration.

The national team was emboldened by their manager, Carlos Queiroz, who, breaking with FIFA’s fictional separation of politics and sport, insisted that “players are free to protest as they would if they were from any other country as long as it conforms with the World Cup regulations and is in the spirit of the game.”

Overall, Iran has lost in more ways than just on the pitch.

At the start of the year Iran, which sits across the Gulf, had hoped to attract World Cup tourists like the UAE, Saudi Arabia and Oman, and proposed the crafting of a joint tourism plan with Qatar. Tehran even agreed to forgo the visa requirement for World Cup visitors.

That hope was dashed by the anti-government protests, the failure to revive the 2015 international agreement that curbed Iran’s nuclear program, and Iran’s inability to complete necessary infrastructure on its Kish Island.

The match against England could prove to have been a cakewalk compared to potential friction when Iran meets the United States on the Qatari pitch on November 29 in what is likely to be one of, if not the most politically charged match of the World Cup.

Similarly, Arab fans, reflecting sentiments among some Qataris, made clear that the World Cup would not be a bridge-building event, at least not when it came to relations with Israel and Israelis.

Arabs largely refused to be interviewed by Israeli media. Footage circulating online showed two Saudi fans, a Qatari shopper, and three Lebanese fans walking away from Israeli reporters in a demonstration of the limitations of soccer as a vehicle to build bridges. In another incident, Palestinians chanted “go home” when approached by Israeli reporters.

Qatari media published some videos of sharp encounters between Arab fans, Qatari nationals, and visiting Israelis with the caption: “No to normalization.”Qatar, like Saudi Arabia, has made the conversion of informal ties into formal relations conditional on a resolution of the Israeli-Palestinian conflict. Under FIFA rules, Qatar was obliged to grant entry to fans irrespective of whether the Gulf state recognizes the country issuing a supporter’s passport.

In line with the rules, authorities allowed Israeli channels to broadcast from Doha, but unlike other major foreign networks did not provide them with a formal studio. Protest was not the preserve of Iranians and pro-Palestinian Arabs. Prominent Qataris made statement of their own by wearing a pro-Palestinian armband at the Germany-Japan match after being told that German Interior Minister Nancy Faeser would sport a One Love pro-LGBGT band.

Ironically, Ms. Faeser was sitting in the stadium’s VIP section next to FIFA president Gianni Infantino, who had just banned players from wearing the One Love band on the pitch in support of LGBT rights.

In response, Germany’s players covered their mouths for the team photo before their opener against Japan. Infantino, unmoved by Ms. Faeser’s gesture, apparently saw no contradiction between his ban and FIFA’s opening days later of disciplinary proceedings against Ecuador over homophobic chanting by their fans in the match against Qatar. (IPA Service)