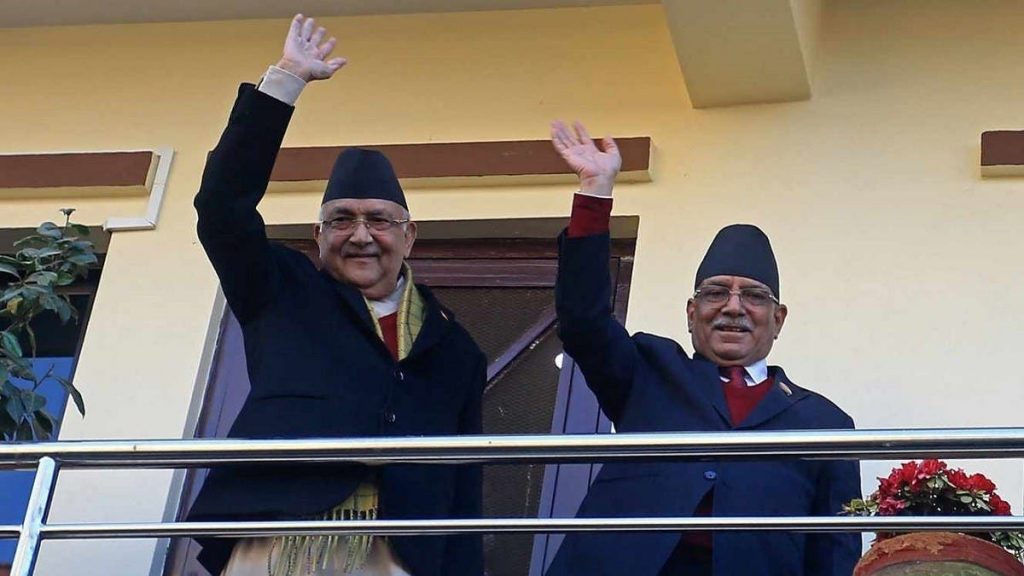 Nepal’s most prominent global face, Pushpa Kamal Dahal ‘Prachanda’ has become the new Prime Minister of the former Himalayan kingdom. In a swift political development on Sunday, he broke away from the ruling alliance led by the Nepali Congress and joined hands with the rival Communist Party of Nepal – Unified Marxist–Leninist (CPN-UML). Nepali Congress which emerged to be the largest single party in the November 20 general elections with 89 seats reportedly did not concede to Prachanda’s demand to become the Prime Minister, first in the rotational arrangement they were trying to work out.

After the talks failed, Prachanda called on CPN-UML leader KP Sharma Oli, who agreed to accept him as the Prime Minister first on a rotational basis. CPN-UML has 78 members and Prachanda’s CPN-Maoist Center has 32 seats in the 275-member Parliament.

What makes Prachanda with just 32 members in parliament lead the new government? Prachanda has many identities – former school teacher, former guerrilla fighter, and two-time Prime Minster, with the count now increased to three. But what makes him formidable in Nepali politics is his ability to sit in negotiations stretching for, not just hours but days and weeks.

Another quality that makes him invincible is his ability to keep his cool and never utter a word that is even remotely churlish or acerbic. He is one of the toughest negotiators who would not concede even an inch no matter how long the stalemate continues.

To top it all, after every such failed negotiation, he would tell the people, there is still hope. Time and again, he has shown these traits so consistently that his resolve can only be compared with the Himalayas. Those who follow Nepali politics are simply at their wit’s loss to put Prachanda under a category and try to generalize his politics. Today, with less than 15% of members in Parliament, he has become the Prime Minister.

No one in Nepal’s politics has the stamina to negotiate with him. During the peace negotiations in 2005-2006, his comrades got a deal with the negotiators that was simply unbelievable. One of the clauses of the peace agreement said former fighters would be integrated into the country’s armed forces.

Prachanda who remained an unseen mystery for most of the 10-year-long armed conflict, however, is not acceptable to New Delhi. Prachanda’s armed conflict caused at least 10,000 deaths in the otherwise peaceful Himalayan paradise. The last time when Nepal’s Prime Minister Baburam Bhattarai arrived in New Delhi, he was received by an Indian foreign ministry official, not even by a Minister of State. This makes Prachanda to be perceived as a China sympathizer.

But Prachanda is neither an India hater nor a China supporter. He is a rebel who comes to the negotiating table with a clear mind about what he wants. He is stubborn and adamant. He is not going to spoil the party but stay until the party is over and much beyond. That’s what explains Prachanda’s accession to the top job. His rivals and compatriots are all exhausted, done and out. They have no drive left to challenge his leadership.

Does this mean Prachanda is going to be the Prime Minister beyond the two-and-half-a-year term as per the coalition agreement? At least, this columnist doesn’t foresee any significant political challenge to his continuance as the Prime Minister, given his ability to negotiate through any difficult circumstances.

And if this happens, he would be in the league of Chinese President Xi Jinping and Indian Prime Minister Narendra Modi who as the longest-serving heads of the countries in this region are still going strong. Does this mean it’s going to create a troika of strange bedfellows in international politics?

Prachanda is pragmatic. Since the 2006 peace deal and 2015 when the new Constitution was promulgated, he has never resorted to strong-arm tactics to wrest power from his political rivals. He has followed the democratic path and has lied low on several occasions. He comes across as someone who is confident of his place in the country’s politics and history textbooks.

But his coming to power may send messages across the red corridor that extends from Nepal to several parts of India. That is an unsettling element for the Indian establishment.

Prachanda’s accession to power is a nostalgic moment for all those who carry the seeds of revolution in their hearts and choose the path of rebellion. All such journeys start with an idea, a thought. If he continues as Nepal’s PM for long enough, it’s hard to believe it will not inspire more rebellions and revolutions in this part of the world. His barely recognizable smile from the corner of his mouth is a chilling reminder: Prachanda has arrived! (IPA Service)

Hunger In India Remained A Major Concern In 2022