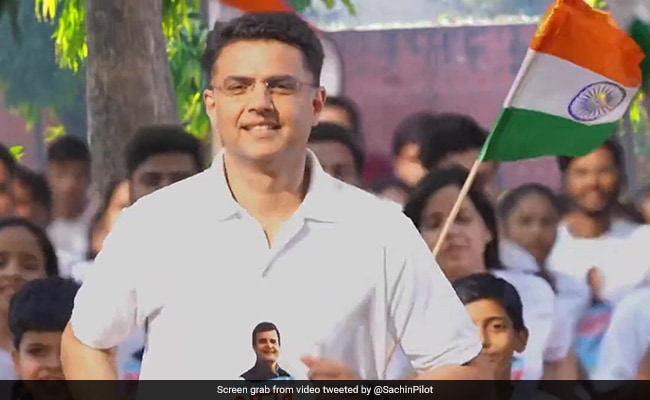 Congress leader Sachin Pilot on Monday once again trained his guns on Rajasthan Chief Minister Ashok Gehlot – this time over the recent exam paper leak. Pilot, who was addressing farmers and the youth at a Kisan Sammelan in Nagaur’s Parbatsar, said the state government must act against the masterminds or the “big sharks” behind the paper leaks, and not against petty middlemen.

The former deputy CM further said that such incidents of exam paper leaks hurt the youth, who prepare hard for their exams despite several adversities while their parents struggle to arrange money for their books and fess.

“To instil confidence in the youth, the government should take action against the big sharks responsible for paper leaks,” said Pilot, who has a history of bitter power tussle with CM Gehlot.

The Rajasthan second-grade teacher recruitment exam paper was leaked last month, following which the test was cancelled. More than 50 people, including candidates, were arrested for their alleged involvement.

At the event, Pilot also called for a legal guarantee on minimum support price (MSP) for crops. “If farmers and the youth of the country unite, they can defeat any force that divides, spreads rumours, and comes to power by telling lies. We demand the Centre should enact a law to legalise minimum support price,” he said.

“Only two communities — the youth and farmers — can break the politics being done in the name of caste, community, religion, language, province,” Pilot added.

As Rajasthan will go to polls in 11 months, the Congress leader sought the support of farmers and the youth. “The power of a vote in a democracy is known to all,” he added.

Pilot said the Congress struggled for five years during the former BJP government’s rule, and as a result of that, the party got one-sided victory in Nagaur.