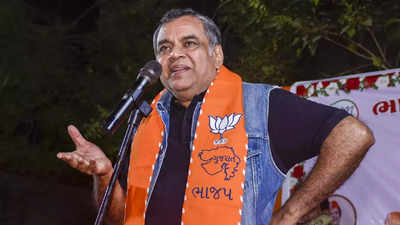 Actor Paresh Rawal might be mistaken for a pomfret. Rawal’s wisecrack about ‘Fish & Bengali’ has landed him in shark-infested waters. He should have stuck to ‘Fish & Chips’. And, if Rawal ever strays into the Bengali hemisphere, (Bangladesh included), he had better look out for Hilsa; it will not bite him! The actor was caught fishing in troubled waters, trying to do one better than Assam Chief Minister Himanta Biswa Sarma, who loves his fish as much as West Bengal Chief Minister Mamata Banerjee does hers. Rawal is the sort who flows with the current, and he is now caught in a viral controversy with his remarks on Bengalis and fish.

Rawal was contributing two bits of his two pence to the BJP election campaigning in Gujarat led by Prime Minister Narendra Modi. Now Mamata Banerjee’s Trinamool Congress wants his sails trimmed, and a CPM leader has lodged an FIR.

Fish for Rawal does not smell nice, but fish for the Trinamool is like heaven on earth. Fact is, every Bengali loves her fish – perhaps, as much as if not more than the ‘sea-zi’ Lakshadweepi – and didn’t like Paresh Rawal making a bait of Fish and Bengali without a fishing rod in hand.

Now, there’s a complaint against Rawal in Kolkata and the West Bengal Police will be knocking at Rawal’s door in Gujarat where he lives with no Bengalis for neighbours. At a rally, Paresh Rawal said the people of Gujarat wouldn’t mind inflation but wouldn’t want “Bangladeshis and Rohingya” next door “cooking fish”.

The exact words of funny Rawal: “Gas cylinders are expensive, but their price will come down. People will get employment too. But what will happen if Rohingya migrants and Bangladeshis start living around you, like in Delhi? What will you do with gas cylinders? Cook fish for the Bengalis?”

Rawal’s “Being Funny” may be a winning formula to his films, but this wasn’t funny. Didn’t Rawal know Bengalis have a thing for fish, and that it’s not fashionable to joke with fish in the joke? For example, “there is a fishy look about him” fits Paresh Rawal perfectly, but that doesn’t mean movie critics will actually mark him out with it in their film reviews, ever.

Rawal has since apologized, after being subjected to what looked like a gherao. The actor realized soon enough that fish is popular with folks all across India. And Bengal, like Kerala and Tamil Nadu, is a riverine state, besides having long coastlines, and fish is available all year-round. The Bengali, and the Malayali, most of them, have fish at least twice in 24/7 and they take it bad if somebody, anybody pokes fish jokes at them.

It’s the same in Japan, where the Japanese eat raw fish in white sauce. Fishing is a sport around the world. Mark Twain’s Tom Sawyer and Huckleberry Finn were serious and regular fisher folks. And in our Mahabharata, the renowned archer Arjuna aimed for the eye of the fish! Paresh Rawal did not know he was muddying the waters.

Now, he has ranged Gujarati against Bengali for no fault of either. And to get out of the self-inflicted controversy he has brought the Bangladeshi and the Rohingya also into the conflagration. That is insulting the entire fishing community, including Gujarati. Does he know, Pakistani jails are holding pens for Gujarati fishermen picked up by the Pakistan Coast Guard?

There are other fish-facts Paresh Rawal should know, and learn them by rote. One, it’s not West Bengal which produces the most freshwater fish. That distinction goes to Andhra Pradesh. Assam and Odisha are equally known for their fishmongers. Having a long coastline makes for a bounty of fish, and plenty of fish lovers.

Henceforth, Paresh Rawal shouldn’t go to the beach to look at just bikinis, looking far out into the horizon wouldn’t be a bad idea. And while at it, think of the abundance of fish in the big blue ocean. Rawal should know that the maximum demand for fish is from Tripura and Lakshadweep. And to think that the archipelago off the coast of Kerala has a troublesome Gujarati administrator!

Truth is the BJP is wedded to a vegetarian future for Indians. The so-called Hindu nationalist party is an advertisement for the “vegetarianization” of the Indian population. And to many who visit supermarkets and hypermarkets owned by Gujarati mutton, chicken and fish are out of question.

Fact is fish is “normal” food everywhere in India, except in parts of the Hindi heartland, including Gujarat and Rajasthan. For the likes of Rawal, fish smells, but for the rest, fish is the healthiest food on the plate. And fish make one of the sharpest, most intelligent people on the planet. Einstein grew up on fish!

Fish is lean and fish is protein, also great for the heart, and for the grey cells. Fish is also a cultural icon to the Bengali, quite often offered to deities. Paresh Rawal should stop listening to Prime Minister Narendra Modi all the time. He should not forget that there is more to the world than just Gujarat, ‘Dhokla’, and Modi. (IPA Service)

There Is Scope For Discussion On Norms For Appointment Of Judges