Describing the Uniform Civil Code (UCC) as essential for the unity and integrity of the country, the BJP has said that the parties and leaders opposing it are against the ideals of Bhimrao Ambedkar.

It is clearly evident from the attitude of the BJP that the Central government can take some big step in this regard in the coming days. It is also being said that the UCC is going to be a big issue in the 2024 Lok Sabha elections.

In an exclusive conversation with IANS, Rashtriya Swayamsevak Sangh (RSS) ideologue and BJP Rajya Sabha MP Rakesh Sinha said that the UCC was discussed in the Constituent Assembly at the time of the making of the Constitution and the framers of the Constitution itself added it to the Directive Principles of State Policy.

Sinha dared Opposition parties to name any such country, among the liberal democracies of Europe, where the UCC law is not applicable.

The BJP MP said that for the unity and integrity of the country, and for the dignity and rights of women, UCC is essential and “it is already too late”.

The implementation of UCC in the country has been the core agenda of Jansangh and BJP since the beginning. The BJP has been promising to implement it even in its election manifesto.

In its manifesto for the recently held Gujarat Assembly elections, the BJP had promised that after forming the government in the state, it would take steps towards implementing the UCC, and will ensure that the recommendations of the UCC Committee are fully implemented. The BJP-led government in Uttarakhand has already constituted a committee in this regard.

Recently, during the ongoing winter session of the Parliament, senior BJP leader and Rajya Sabha MP Kirodi Lal Meena introduced a Private Member Bill – ‘The Uniform Civil Code in India Bill-2020′ – in the Upper House amid heavy protests from the Opposition.

Kirodi Lal Meena told IANS that he introduced the bill in the Rajya Sabha with the consent of his party (BJP).

He also said that the introduction of the bill as a private member’s bill can be called a litmus test and during the discussion on this, the government can promise to bring this bill at its level.

Since the beginning, the BJP’s agenda has included three important core issues – the abolition of Article 370 from Jammu and Kashmir, the construction of a grand Ram temple in Ayodhya and the implementation of the UCC law in the country.

Out of these three core agendas, now only one Uniform Civil Code is left to be implemented and therefore it is being said that the BJP government may soon take important steps towards fulfiling this promise at the national level. 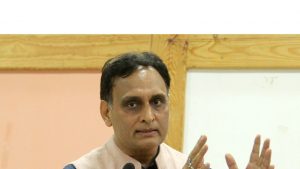