Nitish Kumar Not Campaigning In Bihar Bypolls Due To Personal Issues 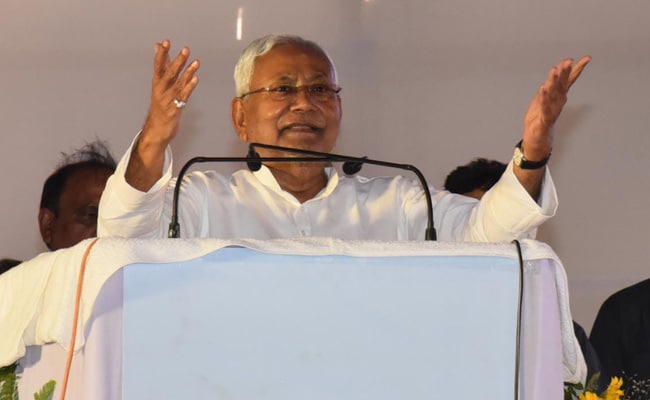 The political developments are not shaping up in consonance to the desires of Bihar Chief Minister and JD(U) supremo Nitish Kumar. While he wants that Bihar should strive for bringing the opposition parties on a common platform, allies of his Mahagathbandhan are not putting so much of interest and efforts to achieve the mission. With Amit Shah on a nonstop offensive against Mahagathbandhan government, especially launching a systematic insinuating campaign against Nitish, he was expecting that the counter offensive from his allies would be more pungent and result oriented.

But this does not appear to be happening. Though RJD leader Tejashvi Yadav is in complete conformity with his uncle boss, other senior RJD leaders have been busy creating annoying problems for Nitish. If the sources are to be relied some senior RJD leaders prevailed upon Tejashwi to nominate Neelima Singh, wife of the don Anant Singh notwithstanding unwillingness of Nitish. For this he has been quite cut up with the RJD, but considering the intensity and the new dynamics the national politics has acquired, he did not make it an issue. He accepted the action of the RJD. Anant had won Mokameh on a JD(U) ticket thrice, before retaining it as an Independent and again, in 2020, as an RJD candidate.

It is a known fact that Anant Singh owes his rise in state politics to Nitish. But in recent times Nitish has distanced himself from Singh. Incidentally Anant is now in jail. He has also been disqualified as the member of assembly. Some time back the BJP MP Sushil Modi had alleged that Nitish feared Anant and this was the reason that he had inducted yet another criminal Kartikeya Singh who is known as the right hand of Anant. However once the controversy surfaced in the public domain, Nitish removed him. This incident has further strained the relation between Nitish and Anant.

Bihar is having by polls to the two assembly segments on November 3; one is from Gopalganj and another Mokameh. RJD has fielded its candidates on both the seats. While other senior leaders of Nitish’s JD(U) would be campaigning for the RJD candidates, Nitish has refused to visit the constituencies and make an appeal to the voters. On both the seats Nitish’s ally RJD is locked in a straight contest with BJP. Nonetheless instead of refusing outright, Nitish has cited his injuries which he had received recently when his motorboat crashed into the pillar of a bridge on Ganga while monitoring the preparations made for the Chhath Puja celebration. The mishap had taken place on October 15.

Citing his injuries Nitish had said; “All my party colleagues are campaigning. I need to take precautions till I recover fully”. In fact RJD which is trying to retain Mokama and wrest Gopalganj from the BJP, was keen on Kumar campaigning for the two seats. The JD(U) president Lalan Singh had held a roadshow in favour of Neelam Devi notwithstanding in the 2019 Lok Sabha polls Anant’s wife had contested against him on a Congress ticket. Gopalganj is the native district of RJD chief Lalu Prasad and his wife Rabri Devi. Obviously stakes are high for Tejashvi. The RJD has fielded Mohan Gupta, who belongs to the Vaishya community, purely with the aim to upset the caste equations which BJP used min earlier elections to its advantage.

Nevertheless the reason which has been primarily responsible for Nitish’s unwillingness to campaign has been his fear of BJP using this to malign his image. He had already faced vilification campaign for inducting Kartikeya in the ministry. At a time when he is making endeavours to bring the entire opposition on common platform, the BJP would undoubtedly use this issue to smear his image. The BJP leaders have already saying that Kumar was feeling “uncomfortable” which is why “cleverly” came up with an excuse. The BJP alleges; “He can visit temples, attend government functions, but injury comes in the way of only an election campaign? Nitish Kumar has shrewdly avoided the huge embarrassment that would have awaited him, particularly at Mokama”.

Yet another fact which made Nitish Kumar wary and adopt pre-emptive measures has been withering campaign by the Uttar Pradesh’s senior OBC politician Om Prakash Rajbhar. Recently Rajbhar, chief of his Suheldev Bharatiya Samaj Party (SBSP) visited Bihar and attacked Nitish at a rally held in Patna to mark the end of his month-long ‘Savdhan Yatra’. His close aides confide that he has been planning to enter in Bihar politics. . His party claims to be catering to the interests of the Other Backward Castes (OBC) and the Dalits. A Kurmi leader is expected to emerge as the rival of Nitish.

It is worth recalling that his SBSP had contested the UP assembly in alliance with Samajwadi party of Akhilesh. But later he parted ways. It is murmured that of late he has shifted his allegiance to the BJP. The reason for Rajbhar being angry with Nitish has been latter’s effort to project himself as the leader of Kurmis in UP. After he severed his relations with the BJP and entered into an alliance with the RJD to form Mahagathbandhan government, some Kurmi leaders had extended invitation to Nitish to contest the 2024 Lok Sabha election from UP. This enraged Rajbhar who viewed it as an attempt to isolate him in state politics.

Rajbhar is an OBC caste spread in through out eastern Uttar Pradesh. The SBSP has been demanding inclusion of the caste in SC category. At the Patna rally Rajbhar underlining the aim of the rally said; “The aim of my Savdhan Yatra has been to alert the people about how they are being cheated. They were earlier the slaves of the British, they are now the slaves of the politicians who make promises but never keep them. Nitish is also one such politician. He cannot be trusted, his promises are empty, and the people of Bihar should be cautious about him in the next elections”.

Incidentally Rajbhar also follows the political line of the BJP on the “caste census”. He reproached Nitish as worthless for his promise of a ‘caste censuses.” Surprisingly he could not hold back his frustration on the issue of Nitish contesting from UP and said;“If Nitish has the courage, he should go to Phulpur and see what happens to him. He will bite dust due to his unfulfilled promises in Bihar. He is trying to go to Delhi via Uttar Pradesh, and is dreaming of becoming the Prime Minister without keeping his word in his own state. The people of Uttar Pradesh will not allow this to happen, and the people of Bihar should also do the same”. His anger against Nitish also got manifested in his remark; “I would flay and skin Nitish if the caste census does not happen in Bihar.”

Obviously with his political opponents led by Amit Shah intensifying their deadly onslaught, Nitish is in no mood to provide them with more ammunition. He has adopted the strategy to steer clear of the controversies. He is sure that with a clean and principled image he would force the BJP on backfoot and make it bite the dust. (IPA Service)