Is Narendra Modi’s ‘Gujarat Model’ Collapsing Along With Morbi Bridge? 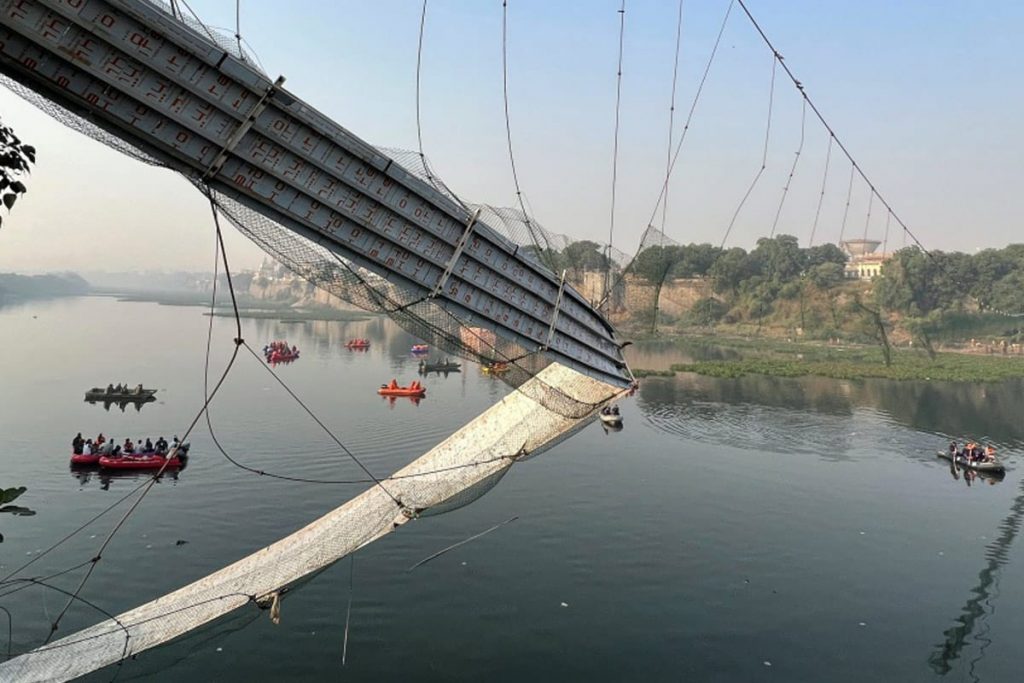 Congress leader Dr. Ajoy Kumar tweeted “Morbi bridge collapse is an ‘Act of Fraud’. God’s message to Modi ji”. New Twitter owner Elon Musk wouldn’t object, he is a free speech absolutist. But even he wouldn’t approve of “likes” garnered for being glib about 134 killed, 50 of them children. Also, God shouldn’t be drawn into political slugfests.

And which God is Dr. Ajoy Kumar talking about? It can’t be the handiwork of a “Punishing God”, right? But if it was, then why blame the jumping jacks on the bridge, and why give clean chits to the political godfathers, the local administration, the bureaucrats, corporate greed, the Chief Minister; and the Prime Minister?

Why involve God in human graft and human greed? Why turn apologists of these bigwigs, of anybody remotely connected with the collapse of Morbi’s hanging bridge? Let’s start again. One, it was manmade, not an ‘Act of God’. Two, it reeks of ‘Act of Fraud’. Somebody crooked played God with Indian lives. Three, do Indian lives come cheap?

When “Old Age” killed the Queen of England, Prime Minister Narendra Modi ordered the Tricolour at half-mast. When 134-plus Indians are killed, it does not matter to the custodians of the Tricolour. Modi hasn’t tweeted once on the tragedy under his watch. Where else do 50 children fall to death by drowning in one fell swoop, and nothing swayed except the bridge on its cables!

Modi skipped a couple of days before he made the trip to the tourist spot-turned-killer-pool. Questions were raised of how he could face the families of the Morbi dead? It’s a shame that even after 27 years, people still haven’t placed Modi, or understood him.

Modi is not the ‘chaiwala’ anymore. He is marked by the royal impervious. And this isn’t the first “collapse” that Modi has stepped into. For a long time, earthquakes dogged him and quakes are acts of God. In 2016, a flyover collapsed in Kolkata, and Modi called it an ‘Act of Fraud’.

Today, after Morbi’s suspension bridge is hanging twisted from torn cables, the TMC is calling the Morbi bridge collapse Modi’s “Act of Fraud”. The taunt fits the karma. At the same time, Modi could do it with some humility. A little humility never hurt anybody. But it’s not every day that a bridge collapses and over a hundred die because of a model!

For, if a model could kill, it’s the ‘Gujarat Model’. Those who know the man well, know that natural calamities always left Modi silent. But it’s a revelation to know that a manmade tragedy, a so-called “act of fraud”, could leave Modi tongue-tied, all his volubility drowned in shallow water.

Modi’s Gujarat Model stood steadfast for nearly three decades, but the upcoming assembly elections would test it. The Gujarat Model rode on the back of state-corporate sector collaboration. It strengthened under Modi, who replicated it on the national stage by tying up with Ambani and Adani after becoming PM.

Infrastructure projects—roads, bridges and what have you not in infra—are the mainstay of the public-private collaboration in Gujarat. The 143-year-old British-made Morbi suspension bridge survived Modi-rule in Gujarat. Whoever thought collaboration with the private entity ‘Oreva Group’ would spell the Gujarat Model’s death? Suffice to say that Modi’s fascination with the private sector had to come to a collapse.

That it killed 134 is the price the people of Gujarat had to pay. For the opposition parties it has never looked more promising. The BJP is reeling from a self-goal. The plight of the Gujarat Model is like that of the extinct bird, and of the lizards which disappeared from the face of the earth.

Does the Morbi collapse spell the end of BJP reign in Gujarat? The long faces in TV studios tell the developing short story. The eyes of Godi Media anchors are dodging those of BJP spokespersons, while the lips are insisting that the Gujarat Chief Minister, and the Gujarat Model, both should face the guillotine.

Diehard Modi anchors are demanding that Gujarati heads must roll, behaving as if set free from the dungeon after long captivity. Modi’s ‘Gujarat Model’ included the taming of the media. But it appears like it took just one bridge collapse for the domesticated K9 to throw away the collar! Dr. Ajoy Kumar cannot be blamed for being smug.  (IPA Service)