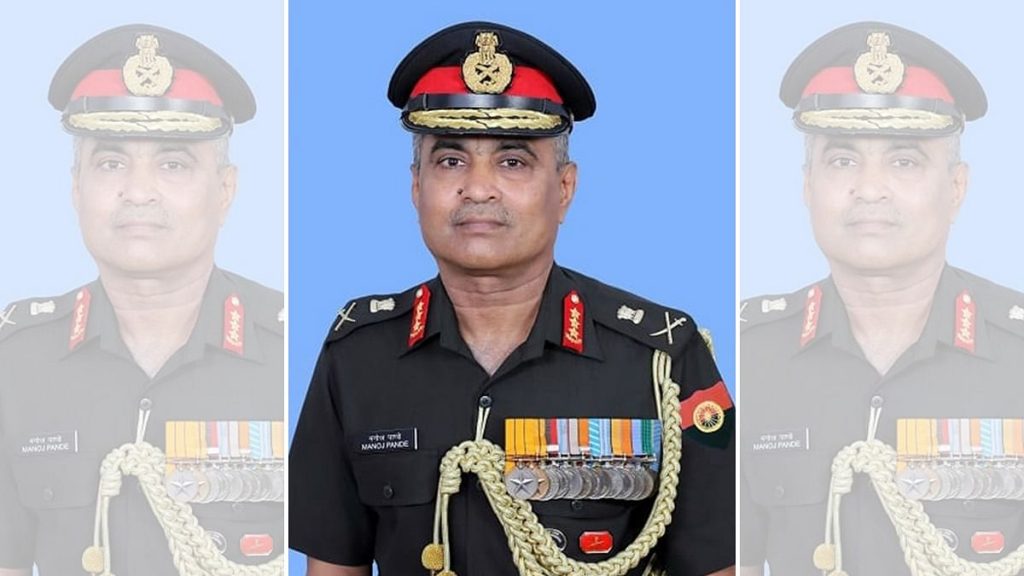 Around eight years ago, when he was Brigadier, Manoj Pande was posted in the headquarters of Eastern Command as the Brigadier General Staff (Operations), one of the most important positions there. His immediate boss was the late General Bipin Rawat who was Major General Staff. Rawat’s boss at that time was General Dalbir Singh Suhag, as the Eastern Army Commander.

The 28th Chief of the Army, General M M Naravane, was also posted in Eastern Command Assam Rifles that time.

There was one thing though that put General Pande, 60, apart from rest. He is the country’s first Army Chief to have risen to the top from Corps of Engineers.

Those aware of their military history tell you how the legendary US Army Chief of early 1930 and Second World War, Douglas MaArthur, once finished top of his class at Corps of Engineers. General Pande similarly stood first in the Young Officers’ Course of  Corps of Engineers, and now has broken a glass ceiling in the Indian Army to rise to top. The Army so far has Chiefs only from infantry, Armoured Corps or the Artillery.

Lt Gen (retd) Sanjay Kulkarni, who served as boss to  both Gen. Rawat and Pande as Chief of Staff of Eastern Army Command, says he saw Pande at “close circles quarters” as a Brigadier, and remembers him as one of the brightest officers at the command.

As Brigadier General Staff, one of Pande’s most important tasks was to brief the command’s leadership about all operational aspects every morning. Kulkarni recalls: “His retentive memory was good. He wouldn’t just point a finger on the map without knowing where it was…. Most of us would be groping… He is extremely conscientious, very hard working, and puts things across in a very rational way. No emotional outbursts. Takes it very easily, and comes to a very logical conclusion”.

There was another thing about Gen. Pande that struck Kulkarni. “He wasn’t a chap who would lie to cover up an incident. He would be honest that this is what has happened, this is where we are, and that is how it is. It was up to us seniors to go about it.”

From seniors to juniors to batch-mates, others too vouch for Pande’s attention to detail and his keenness to know things, while also talking about his sincerity and humility and soft spoken, mild nature. In that, many say, he is closer to his immediate predecessor Naravane, than say the late Rawat who was flamboyant and often found himself in a rough patch over his remarks.

General Pande’s batchmate from the National Defense Academy, Maj Gen (retd) Ajay Seth says: “He is a quiet person, doesn’t talk much. But he talks sense when he speaks. He is not a showman.”

Seth says they really got to know each other well a few years after the NDA, and recalls the time the two of them prepared for  their first promotion exams in the late 1980s. “Our centre was Yol in Himachal Pradesh…My commanding officer had not granted me leave, but I had managed some time and made notes. I asked him about his preparations. He said “I have not prepared at all, Ajay. You have to help me.”

Eventually they worked out a system where Seth would have shared his notes with Pande in the night, and Pande would return them for the latter to prepare early morning. “Both of us cleared all the papers in first attempt,” Seth says, adding that friendship endured. “I always tell him that you cleared exams because of my notes”. But with just that amount of study, he cleared it in one attempt!”.

Born in Nagpur, Maharashtra, Pande did his schooling from the city. His father was an academic, while his mother worked in All India Radio. Of his two younger brothers, one retired as Colonel from the army while the other is settled abroad. His only son is in the Indian Air Force. (IPA Service)