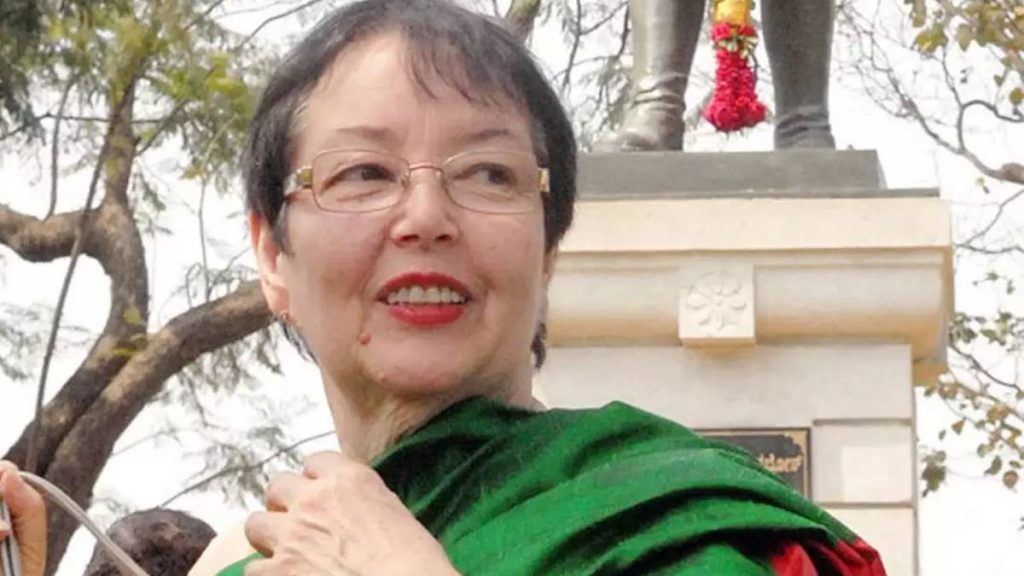 Dr. Anita Bose Pfaff, daughter of Netaji Subhas Chandra Bose and Emilie Schenkl, has expressed her dismay at the erosion of secular values in India in the recent period and how her father had always fought for building India as a secular state. In an interview at her home in Germany, Dr. Plaff said “I can talk about my father’s political and personal practices in this context. As I said earlier, the independent India that Subhash Chandra dreamed of was a secular state. But he himself was a theist, religious man. This is very important. Religion is a private matter, but the state must be secular.’

According to her, the rights and dignity of all citizens must be protected. If it is not in any country, then it is sad. The politics of division is against my father’s political practice and ideology. When he took the risky submarine journey, he was accompanied by a Muslim. His last flight was also accompanied by a Muslim. There was no place for any religious salutation in the INA, only one salutation — Jai Hind. It is important to keep these words in mind, she said.

Dr Bose Pfaff, was interviewed by Arka Bhaduri of Kolkata-based web daily Nagorik dot net. She completed 80 years last November-end had been a professor of economics at the University of Augsburg while her husband, Dr Martin Pfaff was a member of German federal parliament, Bundestag, representing Sozialdemokratische Partei Deutschlands (Social Democratic Party of Germany).She was the first women’s representative to the University of Augsburg.

While maintaining taciturnity, not being an Indian citizen, she couldn’t hide her concern for India which she considers as her own country, she said unhesitatingly, “I want to say one more thing. Subhash Chandra Bose dreamed of an independent, secular India. Religious differences had no place in his INA. His ideology is totally incompatible with communal politics. The politics of religious segregation and the ideals of Subhas Chandra Bose are contradictory.

The daughter of the leader of the Indian National Army reminded that ‘the rights and dignity of all citizens must be protected. If it is not in any country, then it is sad. The politics of division is against my father’s political practice and ideology”. While taking the risky submarine journey whereafter he never returned to his wife and two-year old daughter, ‘he was accompanied by a Muslim. His last flight was also accompanied by a Muslim. There was no place for any religious salutation in the INA, only one salutation — Jai Hind”, she assertively pointed out.

She expressed her happiness over the installation of a statue of her father as a patriot in New Delhi in place of King George V., It was inaugurated on September 8 his year by the Prime Minister Narendra Modi. She got the letter of invitation to attend it just five days before the inauguration. “I didn’t go to the opening ceremony. I also don’t understand why September 8 was chosen. Subhash Chandra Bose has nothing to do with that date.” However, she didn’t reveal the reasons for not coming over to Delhi to be there on that day.

Dr Bose Pfaff made no bones of her chagrin towards a half-hearted recognition to her father and INA she thinks India’s struggle for freedom was achieved by both non-violent and violent means “India’s freedom struggle had two streams. One stream believed in non-violent methods, the other an uncompromising struggle. My father was the brightest representative of the second line. For many decades there has been a propaganda that India’s independence was due to non-violence. It’s not right. The role of armed freedom fighters is also great. The historic struggle of Azad Hind Fauj under the leadership of Subhash Chandra Bose will forever remain written in bright letters in the history of freedom struggle. During the trial of the revolutionary fighters of the INA in the Red Fort, the entire country was in an uproar demanding their release. They were one of the inspirations of the naval mutiny. More studies are needed on these issues,” she said.

Reiterating that Netaji was nota fascist, she stressed thatNetaji was a leftist. Although not a communist, he was ‘ideologically a Leftist. When Germany invaded the Soviet Union, ‘’my father felt very upset. Many of his plans got hit as a result. The branches of the INA in Germany were under clear instructions to fight only against the British. As a result, they never went to fight in Russia,” she added

Defending Netaji’s seeking of German help under the Nazi regime, Dr Bose Pfaff explained that realising the need for foreign aid in the last stages of the freedom struggle, ‘his first choice was the Soviet Union’ but the latter didn’t extended the helping hand “It is important to remember that he came to Germany through the Soviet Union. But the situation was changing fast. The Soviet Union could not help him, neither did America,” she pointed out. There were other states but they were ‘neutral’. In such a situation, “my father took the help of Germany, Japan and Italy for the independence of India. Undoubtedly, taking help from these countries was not a ‘great choice’ for him. But if we look at history, we see that there was no other way. He sought the help of Britain’s enemy for India’s independence. At that particular time he had to take the help of Britain’s enemies” the daughter of  one  of  India’s greatest freedom fighter argued. (IPA Service)

India’s Creeping Industrial Stagnation Is The Result Of Neoliberal Policies