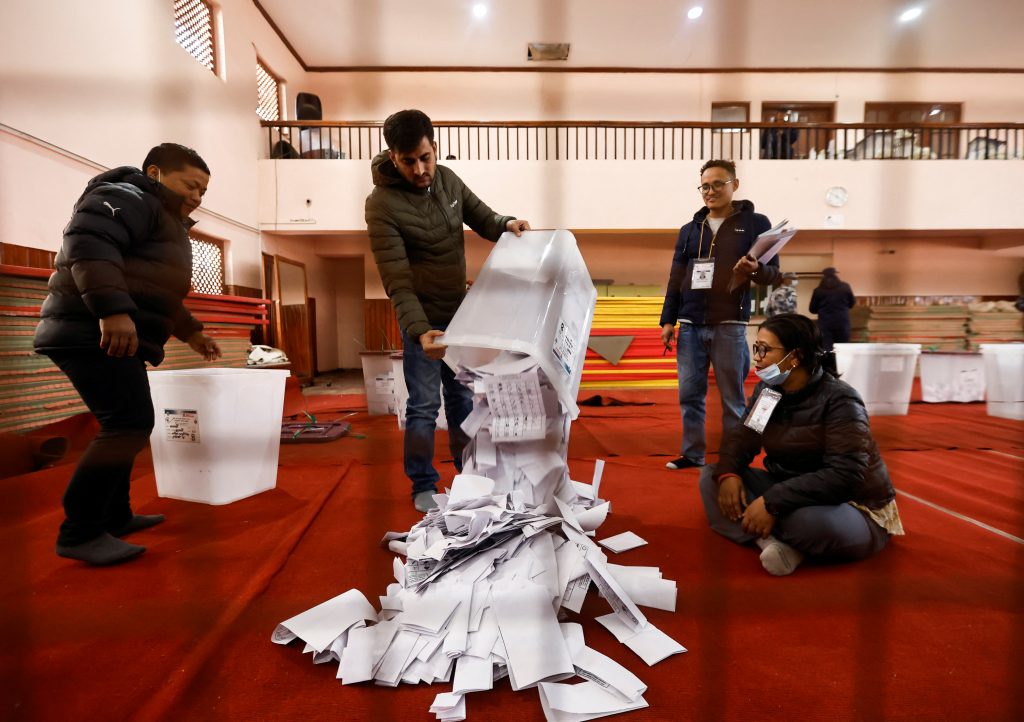 Sixty-one per cent of 18 million voters of Republican Nepal reposed faith on the Himalayan state’s oldest social democratic party, Nepali Congress which won 57 of the 165 directly elected members of Nepali parliament, Pratinidhi Sabha.  The NC-led  five-party coalition and headed by the  Prime Minister Sher Bahadur Deuba is just two short of the magic figure and is about to form the government after the new constitution was framed and put into practice eight years ago. There are five independent MPs most of whom are very likely to support the coalition.

All together 87 political parties were in the fray. The number of parties for election of members of provincial assemblies varies from province to province. There were 2,412 candidates for 165 PS seats directly. As predicted by most of the political analysts and commentators, mainly based in Kathmandu, no party emerged as the majority in the national assembly.  .

The fall of voting percentage from 74 from 61 between 2017 and 2022 is a reflection of frustration among voters as 39 per cent of the electorate did not turn up in this election at the polling booth to exercise their rightful franchise at least apparently. This is no good news to Nepal which is the only SAARC country where apart from directly elected legislatures, 40 percent of members of the national assembly are allocated to parties, based on the proportion of votes received by them. Which is why the Communist Party of Nepal (United Marxist Leninist), was allotted more seats than the NC, although the former won 44 of directly elected seats to the Pratinidhi Sabha as against 57 by the NC.

The disappointment is more against the two communist parties – CPN(UML) and CPN(MC).  Despite having been in power for seven years, until collapse of the bonhomie of the two parties that merged with each other without proper political-ideological arrangement, the two parties pulled out of the shortest-ever existent communist party in the history of world communist movement. Madhav Nepal with his retinue broke away and set up the CPN(Unified Socialist).

Nepal witnessed the most spectacular experiment of Maoist ideology with the erstwhile CPN(Maoist), led by Dahal – then known more as ‘Prachanda’ with his strategic ideology, christened as ‘Prachanda Path’ which evaporated subsequently.. The Maoists captured areas after areas outside the national capital Kathmandu and turned them into ‘liberated zones’ and finally forcing King Gyanendra to step down in order to let the Himalayan kingdom push towards a national election. Dahal became the prime minister. But his greedy nature was gradually exposed paving the way for Oli to move into his hot seat.

The rest is history. The CPN(UML) which was  at distance from the Communist  Party  of China later became pro-Beijing while Dahal became not only soft towards Indian government but befriended the Bharatiya Janata Party, that too during the regime of Narendra Modi’s prime ministership.  Such has been the changing kaleidoscope of post-monarchy communism in Nepal. The disillusionment with communism is sadly a reality in the landlocked Himalayan state.

In this politically volatile imbroglio, NC, set up in 1950 by the highly respected Bisweswar Prasad Koirala. Nepali Congress won the first elections held in the monarchical Nepal in 1959, securing a two-thirds majority.  BP Koirala became the first elected Prime Minister, but it was a short-lived government which was dissolved by the then King Mahendra who introduced the partyless Panchayat system, under monarchical hegemony. The NC is committed to the republican democracy. The CPN(UML), led by the former PM Khadga Prasad Sharma Oli, on the contrary took in the pro-monarchy Rashtriya Prajatantra Party in the national elections and provincial elections, held on  November  20 this year.

Among the NC  allies are  CPN (Maoist Center) led by Pushpa Kamal Dahal and CPN(US) which won 18 and 10 seats in the PS respectively. The CPN(UML)  won 44 sears while it main ally, RPP, got seven seats. The newly born Rashtriya Swatantra Party which campaigns for a presidential system won seven seats although it did not field candidates in the provincial legislatures.

However, CPN(UML will be allocated the highest number of indirectly nominated PS members under the proportional representation, based on number of votes received under sub-sections 2 and 6 of section 60 of the House of Representatives Election Act  and schedule 1 and 2 of the same act and sub-section 2 of section 60 of the State Assembly Member Election Act 2074 and schedule 1 of the same legislation, attuned to the essence of new constitution. There are 110 proportionally allocated PS members. The participant political parties, allocated, are to nominate them.  The CPN (UML)received 2,845,641 votes, followed by .NC’s 2,715,225 and CPN(MC)’s 1,175,684, the percentage of votes having been 26.95, 25.71, and  11.13 respectively  while in 2017 all the three parties got higher parentages of votes –  CPN (UML) 33.23. NC 32.78 and CPN(MC) 13.66.

The CPN(UML)’s secretariat is to meet   to   discuss the political strategy the party has to adopt as the main opposition party. A thorough analysis of electoral results is to be done later at  central committee  of the party, according to  informed political circle.

People are fed up with the haughty behaviour of rank and file of two communist parties. Every day, nearly 3000 young people leave Nepal for jobs, according to a report, made public by department of Foreign employment. It is on the rise. Trafficking of girls goes unabated. The Left regimes paid no attention towards reduction of such disturbing developments said a seasoned political observer. (IPA Service)