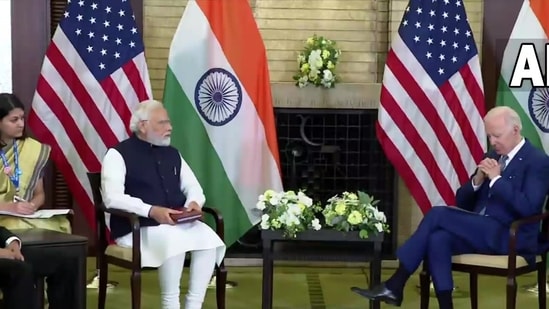 Now there is no ambiguity the Indian Prime Minister Narendra Modi has raised the goal post and put Russia in the club of his enemies. The credit goes to Joe Biden. He could accomplish the task which Donald Trump, the so called best friend of Modi could not achieve. India has been a member of Quad for long. But it has been maintaining restrain when it came to criticising Russia.  But the fourth summit of Quad is witnessing a new India, joining inimical voices against Russia.

The day India refused to have a clear stand in the case of Ukraine it became apparent that it was sliding towards western powers. Though Modi government did not accuse Russia in so many words of attacking Ukraine, obliquely it endorsed the western blame   of Russia being the aggressor. Its presence at the Quad summit makes it explicit that India no more treats as a friendly country notwithstanding having nice diplomatic bilateral relations.

The realisation that has dawned upon Modi  is  he and his rightist politics would fail to survive in the current international political set up unless he prefers to continue as  a member of the Quad. This is clearly manifest in his observation that the Quad is working towards a “constructive agenda” and is a “force for good”. In fact Modi reciprocated the opinion of Biden for whom Quad is ‘not just a passing fad, we mean business’. Already some of the developed countries who had conservative or rightists rulers are making a tactical shift towards liberal or centrist dispensation.  Australia is the latest, though its new prime minister an anti-conservative face continues to support the Quad. He has his own compulsion and it is hardly a fortnight he has come to power replacing the  conservative government.

What made Modi to stick to Quad is not quite intriguing. It is the compulsion to survive in the domestic politics that made him to fall in the line. America’s sustained criticism of the style of functioning of Modi has turned Modi scared of the international approach and stance towards him. The public bodies in USA have even been describing him as an autocrat. The US agencies and the media have already of late been presenting India in poor light and even accusing it virtually to the extent of being a failed state. The foreign minister S Jaishankar was hard pressed to defend the country.

India as a Quad member has more relevance than having merely bilateral relations with the USA. In this perspective the statement of Modi at the Tokyo summit “Quad’s mutual cooperation is achieving a free and open Indo-Pacific region” is more pertinent and important. The motive of the Quad summit was made clear by Biden. At the fourth Quad leaders’ summit – second since the Russian invasion of Ukraine – Biden hit out at Russia and called the war a “dark hour in our shared history”. He said that this is more than just a European issue and called it “a global issue.” “As long as Russia continues this war we are going to be partners and lead a global response”. The importance of Quad was underlined by Biden’s observation “the leaders were gathering at “this transformative moment in the world”. He even congratulated Modi “it was good to see Prime Minister Modi in person and thanked him “for your continued commitment to making sure democracies deliver”.

AQs if this was not enough Modi even called for a free, open and inclusive Indo-Pacific. Obviously he was adopting an anti China posture, primarily at the behest of the USA.  According to Modi the Quad grouping has assumed an important place in the world stage and the scope has expanded. He said that Quad ensures peace, prosperity and stability in the Indo-Pacific region. The USA President resonated more or less the same thinking and spirit; “We share the same goal of ensuring a free and open Indo-Pacific that will deliver greater prosperity and greater opportunity for all of our children. I am looking forward to continuing to work with all of you and to strengthen economic cooperation to deliver inclusive growth and shared prosperity”.

In 2022 Modi finds immense virtue in the Quad when he says;” the mutual trust and determination among the Quad member countries is giving new energy to democratic forces and encouraging a free, open and inclusive Indo-Pacific”. Though he harps on democratic forces, his own action on destroying the democratic set up and functioning has come under severe attack from the international fraternity. In his opening remarks at the summit, Modi said the Quad has gained a significant place at the world stage in a short span of time.

Modi nurses an absolutely skewed notion that Quad will tame Russia and China. In its latest war with Ukraine, Vladimir Putin has shown to the world that cannot be gagged and tamed. It even challenged the NATO and its claim of supremacy. It is interesting to watch that summit has not adopted any resolution so far condemning China and Russia. Significantly some of the Quad member countries, especially India, have strained relations with China but Quad has not come out with the word of solace for these countries. The Quad or Quadrilateral Security Dialogue comprises India, the US, Japan and Australia.

Modi intends to use the Quad for the economic benefit of India. Before leaving for Tokyo to participate at the summit he had said “During my visit to Tokyo, I look forward to continuing our conversation further, with an aim to strengthen the India-Japan Special Strategic and Global Partnership”. On September 24, 2021, Prime Minister Narendra Modi while attending the first-ever in-person summit of the Quad leaders emphasised ‘establishing peace in the Indo-Pacific region’ with ‘like-minded countries’ that share democratic val

Rightist think tank and supporters of the western powers strongly argue in favour of India continuing  to be a member of the Quad. No doubt the Quad will never be able to protect the Indian interest. It is argued that India can counterbalance China’s growing presence in the Indo-Pacific region, including its BRI (Belt and Road Initiative) which has led to it building port facilities in countries neighbouring India, giving rise to a sense of encirclement in New Delhi. But recent military developments in Ladakh and adjoining Indo-China border areas makes it explicit that Quad has failed to come to India’s help. It is India’s own initiatives like its Act East Policy and Extended Neighbour policy have boosted India’s engagement in the Indo-Pacific.

With Western world trying to use the Quad for its own benefit, the Quad significantly poses challenges for India. It would intensify and reactivate tensions with China on different fronts.  In this backdrop India has to ensure that the Quad is not reduced to an anti-China grouping. We have already noticing that BRICKS has been losing its momentum. India and China are members of BRICS (Brazil, Russia, India, China, and South Africa) and SCO (Shanghai Cooperation Organisation). It would be foolish to presume that Russia and China have friends across the globe. The members friendly to Russia and China also have good relations with India. In case India at the behest of the USA prefers to strain its relations with China then it that case it may lose its friends cozy to China.

China is also active in Myanmar, Nepal, Pakistan, and Sri Lanka through its Belt and Road Initiative (BRI). What is most important is no other Quad country except India shares its borders with China. If India engages militarily in the Quad, there emerges a risk of Chinese aggression at the India borders. With USA reinvigorating Quad, China is also gearing to organise its borders areas.  In fact it has accused the Quad countries of trying to create problems of it. IN March 2018, that China’s foreign minister, Wang Yi, had referred to the Quad grouping as nothing more than ‘sea foam on the Pacific and Indian oceans’ that would eventually dissipate.

The USA has already started provoking India against China. Notwithstanding the inability of the Indian rulers and policy makers to evolve a concrete approach towards China, attempts are being made to create an impression that India and China cannot have a friendly relation as they nurse severe antagonistic relations.  Western lobbyists have come out with a simple narrative that India’s relationship with China is right now going through a very difficult phase after Beijing violated agreements not to bring the military forces to the eastern Ladakh border. Also China is provoking India at every turn as it is doing with the United States. True enough the birth of Quad owes to the long pending proposal of  developing a new strategy to keep the critical sea routes in the Indo-Pacific free of any influence, amidst China’s growing military presence in the strategic region. (IPA Service)