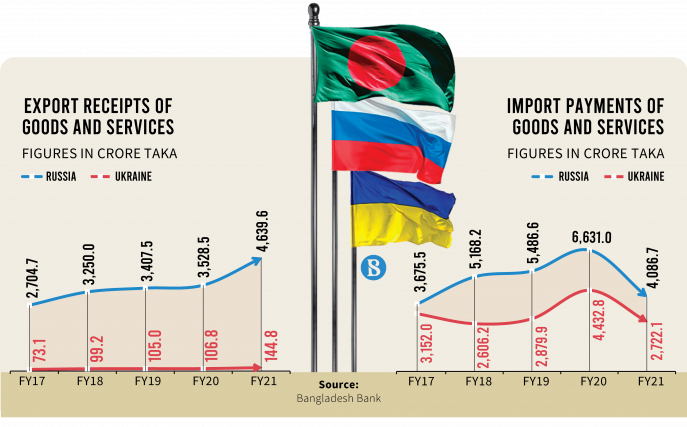 In recent weeks, the value of Bangladeshi Taka (tk) has been declining sharply, as the US dollar has emerged as the strongest currency in the aftermath of the Ukraine war. According to reports from Dhaka this morning, the Bangladeshi tk further declined by 40 paise vis-à-vis the US $.

Early market reports said one US $ fetched 87.30 BDtk this morning as against 86.70 seven days ago.

Economists are especially concerned because despite the weakening of the taka in the exchange rate, following a sharp rise in the demand for the US greenback, there has been no major improvement in the country’s export earnings, which is supposed to follow automatically. Dhaka-based financial reports worked out that in concrete terms, local banks themselves were paying anything between tk 5 –8 more for each US dollar, which greatly added to their transactional/operational costs, at various levels.

The rising demand for the US $ was driven by the settlement of import bills at the customers’ level and also because of an under-reported but no less significant ,reason — the instability in the prices of global commodities in the wake of the war in Ukraine. Bangladesh is bracing for a major increase in the price of wheat with around 20% of its needs met by imports usually from India, while purchases from Russia and Ukraine accounted for 30-35%.

Despite having a manageable 5/6% rate of inflation, Bangladesh experts feel that given the present purchasing power among common people who have not yet fully recovered from the Covid pandemic restrictions, the actual situation is much worse. The decline in the value of tk is the key to this. The erosion in the value of the taka even in the domestic markets has been palpable, with prices of basic items like onions, potatos and eggs rising steeply, hurting lower level incomes and affecting over 80% of the population.

The scramble for US dollars has made even importing oil more difficult for Bangladesh, because of procedural delays in routine transactions that can stretch for a week. There are not enough dollars in the Bangladesh central bank for release to other banks. Following the recent increase in the benchmark interest rates in the US, the dollar is at its strongest vis-a-vis other major currencies including the Euro.

Only recently the Energy Ministry in Bangladesh has allowed banks to buy the US$ at market rates to avoid transactional delays and help maintain the export/import schedules as far as possible. Buying the dollar at higher than usual rates partially helps Bangladesh avoid a flight of the greenback, but at the cost of worsening inflation at home.

This has naturally led to a clamour among local economists who are currently pressing the Government not to resort to piecemeal solutions, but to work out a comprehensive economic package. The Government, they suggest, can certainly consider working out a reset in existing repo/other interest rates in banks, as has been done in India to check inflation and also go in for a thorough review in the existing monetary policy because of the general volatility seen in the world’s economy because of the Ukraine war.

Informed source say a deep restructuring of the basic economic policies in countries like Bangladesh may have become necessary because of the changed world situation. Currencies like the Yuan or the Russian Roubles may have held their own against a background of challenging economic uncertainties, thanks to their involvement in the BRICS and a few supporting financial institutions. Therefore other south Asian countries besides India could also consider joining the BRICS, which China feels should be expanded without delay.

Recent Dhaka-based media reports, carrying warnings and messages from various analysts have called for a more thorough policy-based response/programme from Bangladesh government to help its citizens survive the strong economic challenges that lie ahead. It must not be forgotten that all over the world, they argue, the ongoing conflict in Ukraine will negatively impact several major sectors of the economy: energy, transport, mines and metals, microchips and food. As a major middle income developing country that is making rapid economic progress, Bangladesh cannot afford to lag behind in the face of the greatest challenge it may have to face soon.

As the exchange value of the BD taka declines, coupled with rising inflation and price rise at home, there are still a few positive signs in the Bangladesh economy. The forex reserves held by the country are strong, standing at $44.18 billion in April this year. In 2021, the figure for April was over $45 billion.

However in 2022, thanks to the continuing volatility in the world economy, uncertainties in the banking sector and other imponderables, financial analysts in Bangladesh estimate that between February and April this year, the country’s forex reserves might have suffered a depletion of around $530 million, on account of fluctuating exchange rates and rising costs of major currencies. Bangladesh government is closely following the economic developments in India. There is a growing feeling that this South Asian nation with a commendable track record in improving economy can be considered for membership of BRICS through expansion. (IPA Service)