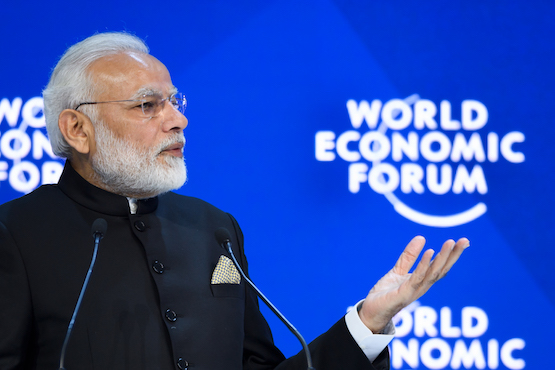 The World Economic Forum’s Davos Agenda 2022 intended to bring world leaders together to address the ‘state of the world’ and to share their visions for the year ahead. On the very first day, the world has head the Prime Minister of India Narendra Modi, singing for himself, what his government have done for India and the world, and thus failing the country in presenting its real ethos, its record, and its will for ultimate welfare of the world. Greed for money and self-interest can be seen everywhere in his speech for which India never stood for. India stood for emancipation of all, freedom from all tribulations whatsoever, and that spirit was absent from India’s PM’s address. However, that spirit was surprisingly present in the address of António Guterres, the Secretary General of the United Nations.

“On behalf of 130 crore Indians,” was the opening line of the address of our Prime Minister, and thus all Indians have every right to be aggrieved if they feel they are misrepresented by his own prime minister at a world forum, apart from the ‘incorrectness of the population number 130 crore.’ The data is old and was mentioned at a time when the world is seeking real time data for plan solving the real time problems and nobody is interested in decade old data. It may be a simple mistake, but such mistakes earn epithets like ‘careless prime minister.’

In the very beginning he ‘boastfully’ informed the world that India was filled with the excitement of the celebrations of 75th year of its Independence and also with the confidence of having administered 160 crore corona vaccine doses in just one year. The wisdom of talking like this is questionable, at a time when this year’s Davos event takes place “in the shadow of an enormously difficult period for economies, people, and our planet” and the UN Secretary General had pointed out in the same event. The world is slowly emerging from the depths of a paralyzing economic crisis and recovery remains fragile and uneven, a Prime Minister of a country like India was talking about celebrations.

As for boasting about vaccination of Indian population, we should again note what Mr Guterres had lamented that there were absence of equity and fairness in vaccination. He said that there was lack of solidarity in providing vaccines to all, and reminded the WHO goal to vaccinate 40 per cent of people of the world in all countries by the end of last year, and 70 per cent by the middle of this year, but the world was nowhere even close. In fact, he added, vaccination rates in high-income countries are shamefully seven times higher than in African countries.

Apart from the vaccine equity of the entire population of the world Mr Guterres had rightly argued that the world must prepare for the next pandemic with investments in monitoring, early detection and rapid response plans in every country. The India PM who boasted about vaccination was silent on the preparedness or investments in healthcare, perhaps because he knows he had done nothing in the country.

Modi’s speech again was out of tune because he knows his own financial system that he has been pursuing since he came to power in the country impoverished the majority and made select few to prosper. Even the latest Oxfam report published just before the Davos event, says that India’s financial system was ridden with such faults that even during the pandemic when 84 per cent of the households suffered decline is income with tremendous loss of lives and livelihoods, billionaires prospered and their gains multiplied.

Mr Guterres also asked the governments and institutions to go beyond GDP to measure for investment risks, to address corruption, and illicit financial flows, and to ensure that tax systems are “fair and designed in a way that truly reduces inequalities. Oxfam report has found that India’s very tax system promotes inequality, and the PM was silent on such issues.

The third important issue, after inequality and the reformation in the financial system was climate action. PM Modi talked about net-zero by 2070 for India but the science require it by 2050 for the world across all countries.

UN Secretary General has said the world “cannot afford to replicated the inequalities and injustices that continue condemning tens of millions of people to lives of want, poverty, and poor health” and “we cannot continue building walls between the haves and have-nots.” PM Modi said nothing concrete on such issues while tried to glorify his government and himself.

He talked about profit, investments, industries, startups, economic reform, et al in such a breath that emanates the smell of the greed of wealth, but not removal of inequality in every field of activities prevailing in India and across the world. He talked about incentivizing investment of production and ease of doing business, but forgot to talk about promoting ease of living. He talked about reforming the international organizations and need for collective and synchronized actions by every country to face the emerging challenges. He even questioned whether “multilateral organizations are ready to deal with the new world order and news challenges; is that strength left in them?

Obviously Modi was singing his own song, not the song of India, which was out of tune with the World Economic Forum’s Davos Agenda on the one hand, and with the real concerns of India and the world on the other. (IPA Service)

LIC IPO Undervaluation Kicks Up A Big Row In The Government
Posting....