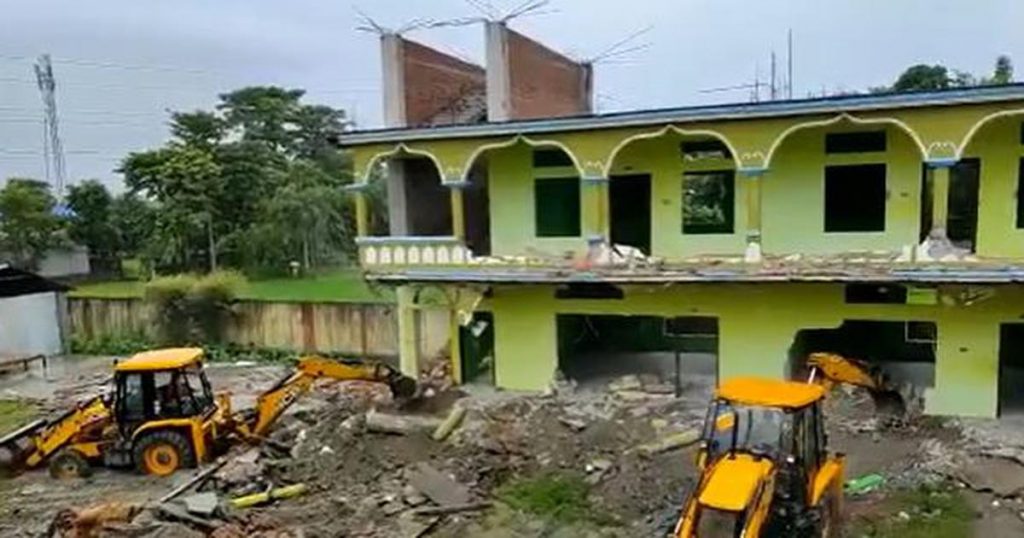 Muslim leaders and organisations in Assam and beyond have strongly protested against the recent demolition (by using bulldozers) of three Madrasas so far by the BJP-run State Government. Major minority organisations may approach the Supreme Court to protest against some recent actions carried out by the state Government.

Chief Minister Mr. Himanta Biswa Sarma, endorsing the demolition drive clarified that not all madrasas had been targeted.

State officials said there were police reports against the demolished madrasas, alleging illegal to-and-fro movement and harbouring in the premises of known operatives of the banned Al Qaeda and extremist Anasarul Bangla( based in Bangladesh) organisations. State BJP leaders alleged there had been several arrests made in this connection already. Those held so far include students, teachers and Muslim clerics connected with some ‘so-called schools that were being misused as ideological training centres for Islamic extremists’.

Mr Sarma’s assurance that not all Muslim-run schools were targeted did not bring much comfort to mostly Bengali-speaking Muslim victims of the demolition drive. The State government had already announced its decision to close down officially registered madrasas some time ago. Its explanation was: the syllabi/ curriculum of studies in these institutions did not incorporate standard elements of a modern educational system for students. They laid more stress on the study of Islam and religion-related issues. There was no reason, for instance why many of them had made the learning of Arabic, by no means a local language, compulsory, administrative officials said.

State BJP spokesman pointed to the fact that the issue of an absence of modern teaching amenities/methods at most madrasas especially in the rural interior was a major problem. There had been acrimonious debates within the larger societies on such matters not only in India, but in neighbouring Pakistan and Bangladesh as well.

Mostly the people in authority concerned with the financial and administrative side of running madrasas whether in India or elsewhere seemed to more amenable to the suggestion and advice from major Islamic organisations and high profile clerics. They strongly resisted official efforts to shift to a more inclusive modern syllabus for students that would enable them to compete more effectively in the job market after passing out.

While official decisions to ‘modernise’ madrasas have not been easy to implement in Assam or even started in West Bengal, thousands of so-called schools have been shut down during the last 4/5 years in Pakistan and Bangladesh.

Mr, Sarma who had strongly pushed for banning government-aided madras — along with the old style Sanskrit teaching schools (Tols) which mostly Hindu students attended  had taken the stand that no government had any business sponsoring or financially helping schools/institutions that laid more stress on teaching religion than on pursuing a more modern syllabus/curriculum. He made no distinction between madrasas and tols, according to state officials.

Also, the Assam government emphasized that it had nothing against madrasas/tols being run as before by individuals/organisations in the private sector, to avoid the charge of interfering with the fundamental rights of people to educate themselves. However, most minority organisations including the AAMSU and Muslim community leaders protested against such official statements, alleging that the system of education had often been ‘modernised’ from time to time, contrary to sweeping official claims. The real purpose of the BJP-run administration was to weaken the educational base of local Muslims and sideline them socially.

The Assam government was re-deploying officially appointed madrasa teachers in registered institutions to other institutions, to protect job losses. It was pointed out that students passing out from tols/madrasas found it difficult to secure jobs in a competitive market, because (a) authorities in most places were reluctant to recognize their degrees/certificates. And (b) the students not being in strong in traditional subjects like English, Maths, Science and Economics, could not meet the highly demanding criteria that most employers especially in the private sector, expected their recruits to meet.

This being the case, it did not really matter whether the Assam Government did not proceed to demolish all suspect Madrasas , as most were being closed anyway.

Muslim leaders and organisations have reacted sharply against the Assam Government’s decision, seemingly modeled on the lines of a few recent decisions taken by the Uttar Pradesh Government, also under the BJP’s control : to demolish buildings and other assets belonging to alleged law breakers — the move apparently favoured by officials as an ‘effective response against the rising number of crimes and a general uptick in outbreaks of violence that caused much social damage of lives and property.

AIMIM leader Dr Asaduddin Owaisi has questioned the logic behind the use of bulldozers. In recent statements, he insisted that any wrongdoer or allegedly Islamic extremist could be arrested and punished. But under what law of the land was the Assam government demolishing madrasa- owned buildings that had not been built illegally, he asked.

Veteran minority leader Mr. Badruddin Ajmal (AIUDF) also used similar arguments while criticisng the BJP-run state Government. All law breakers should be punished, he said, but he questioned the logic of using bulldozers against common citizens who had committed no crime. Announcing that legal steps were being considered, he saw in the official demolition drive was one more attempt to marginalise the already threatened Muslims in Assam. (IPA Service)