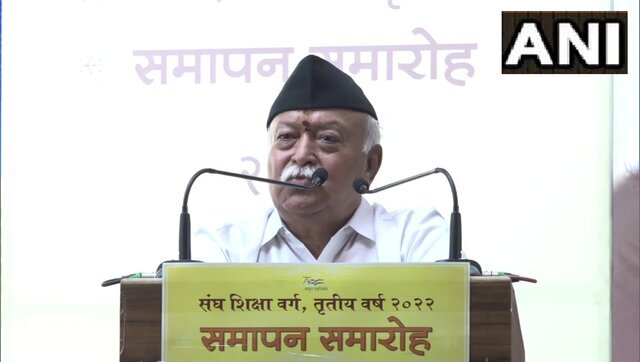 RSS supremo Mohan Bhagwat’s sermons which appear to be virtuous having high quality of sense of morality are simply façades to assuage the feelings of the liberal Hindus and to provide protection to the Hindutva fringe has given birth to and to fortify it against criticism from the liberals and centrist forces.

Bhagwat’s homilies have twin objectives; to ensure that a common Hindu does not get antagonised and the second, confuse the Muslims about its real intentions to force the Muslims to support the RSS and its brand of politics. RSS chief may not say in so many words, but the fact is it intends that Muslims should bow to its dictates and accept it as their ideologue.

It is also imperative to note that Bhagwat came out with his statement only after Muslims hardened their stand against the machinations of the forces of Hindutva and expressed their resentment at their Deoband summit, which was attended by nearly 5000 clerics, religious leaders and scholars. It made the RSS chief jittery as he knew that any kind of direct and violent confrontation with the Muslims would prove to be counterproductive for the RSS. The fear of even a major section of Hindutva protagonists severing their relations with the organisations lingered high in the minds of the RSS functionaries.

RSS chief Mohan Bhagwat in his address in Nagpur on Thursday decisively supported the claim of Hindus over the Gyanvapi mosque in Varanasi but questioned the need to look for a “Shivalinga” in every mosque. If he has been really sincere about his remark that there is no more need to look for Shivling in all the masjids across the Hindi heartland, then in that backdrop he should have candid warned the Hindutva brigands that enough is enough and they must stop it. Instead he kept open the door for such activities.

This simply affirms the RSS design of dual approach; to talk and act in different ways. If he sincerely believes that the RSS was not in favour of launching any other “andolan (movement)” for a temple after the Ram Janmabhoomi he ought to have outright decried the Gyanvapi mosque quarrel being resurrected by Hindutva elements. The bare fact is Bhagwat strongly supports modus operandi of his cadres and their claim over the Gyanvapi mosque not only on grounds of ‘faith’ but also ‘historical facts’. He even supports the issue to be dragged to court, saying the court’s decision should be accepted by all.

What was really significant to watch was the response to his statement by the BJP and RSS leaders. They not only lauded his speech. Instead, they appreciated Bhagwat for speaking like a statesman and also expressed the belief that it would influence the political discourse. He ought to realise that his dual speak would not do good to the country and the Hindus of the country. He also must not nurse the notion that he can force Muslims to convert back to Hinduism. He lives in an utopian paradise. If he has been really sincere in his perception and words, he should have asked his followers and RSS affiliated outfits to take back the petitions they have filed in court over Kashi and Mathura.

Bhagwat does not forget to mention that Islam came to India with invaders and they destroyed temples, but he never mentions that the Hindus who came to India had demolished Buddhist structures to establish their rule. In a way it could be safely said that the Hindus showed the way to the Muslim invaders. Bhagwat is a learned person and it would be in the greater interest of the country and its people, the Hindus, no to raise this issue, dig the past and come out with some utopian theories.

Some Hindutva protagonists and BJP leaders emphasise that BJP or RSS will not undertake any movement but how they can guarantee that Hindus would not raise this issue in their own capacity. This is purely a lame excuse. It is an open secret that almost all the controversial issues pertaining to temples have been raised by the RSS and BJP cadres. Under a well-planned strategy they have used the lower rank cadres to wreck the issue. In Gyanvapi case they have placed the women cadres in the frontline.

Interestingly while Bhagwat addressing the concluding session of the RSS officer training camp in Nagpur, said the RSS was not in favour of launching any fresh movement (naya andolan) on the Gyanvapi issue after the November 9, 2019 judgment of the Supreme Court on Ayodhya, the very next day of his sermon a sadhu from Gujarat who is visiting Varanasi began an indefinite fast  after police prevented him from going to the Gyanvapi mosque and carrying out his declared objective of worshipping the purported Shivalinga discovered on the premises. AS if this was not enough the said sadhu, swami Avimukteshwaranand,  chief disciple of Swaroopanand Saraswati, Shankaracharya of Sharda Peeth in Dwarka, announced that  he had brought a lawyer to file a petition with the Varanasi district court seeking rights for “any Brahmin to pray before the Shivalinga”.

This obviously implied that either the writ of RSS chief has lost its relevance or it is manifestation of implicit understanding between the RSS leaders and the Hindutva brigade to denounce his words and go ahead with their programmes. By resorting to this strategy while the RSS will maintain the disguise of being an organisation concerned of the welfare of the citizens, irrespective of Muslims and Hindus, it would continue to practice its hate politics. There I no denying the fact that Bhagwat suggestion that the Sangh would keep away from Mathura and Kashi and focus on “character building (vyaktinirman)” Gyanvapi dispute involves some issues of faith and the court’s decision on it should be accepted by all is simply camouflage.

His statement “Gyanvapi has a history which we cannot change now. We did not create that history. Not today’s Hindus, not Muslims. It happened then. Islam came here with the invaders. In these attacks, temples were destroyed to subdue the morale of those seeking freedom for this country. There are thousands of such temples. Issues of temples, which hold special significance in the hearts of Hindus, are now being raised,” is quite loaded and ominous.

Notwithstanding Bhagwat regularly praises the Muslims, the fact remains that he does not treat the Muslims as citizens of India and equals to Hindus. Look at his statement; “Hindus are not opposed to Muslims. The ancestors of Muslims were Hindus. Many feel that what was done (the demolition of temples) was done to break the morale of Hindus. A section of Hindus now feel that these temples need to be reconstructed”. If he has been really interested in restoring the social harmony and build a comprehensive brotherly relation he ought to not have uttered this fanatical rhyme.

His chastising the Hindutva supremacists who claim the existence of shivlings in mosques across the country, is an eye wash is clear from his observation; One should not raise a new issue every day. Why escalate fights? On Gyanvapi, our faith has been there for generations. What we are doing is fine. But why look for a Shivling in every mosque? What happens in mosques is also a form of prayer. Okay, it has come from outside. But Muslims who have accepted it are not outsiders, they need to understand this. Even if their prayer is from outside (this country), and they wish to continue with it, we are fine with it. We are not opposed to any form of worship)”.

RSS guys are experts in distorting the history and historical facts. The edifice of Hindutva has been built on this very foundation. He said that the RSS was not in favour of launching campaigns such as the Ram Janmabhoomi movement in Ayodhya but at the same breath he tacitly backed Hindus on the Gyanvapi mosque dispute in Varanasi. He said “On Gyanvapi, our faith has been there for generations”. Strange, he wants to tell people that the RSS was not interested in Ram Mandir but they were interested in Gyanvapi.  Does not it contradict his statement that RSS had launched a movement for Ram Mandir.

Bhagwat possesses rare breed of double speak. While he has been adept at saying “ those who say Muslims are not Indians are not Hindus; DNA of Hindu and Muslims is same; the ancestors of Muslims were Hindus and many more things; he has highest order of proficiency in disparaging the Muslims. He never cautioned the Hindutva brigand to refrain from targeting and attacking Muslims. (IPA Service)

By Arun Srivastava RSS supremo Mohan Bhagwat’s sermons which appear to be virtuous having high quality of sense of morality are simply façades to assuage...

By Peter hill Raymond Williams would not have claimed to have found all the answers. But we should remember him as one of the most...

Is The RSS Chief Mohan Bhagwat Trying To Tame The Saffron Hawks?
Posting....