Is The RSS Chief Mohan Bhagwat Trying To Tame The Saffron Hawks? 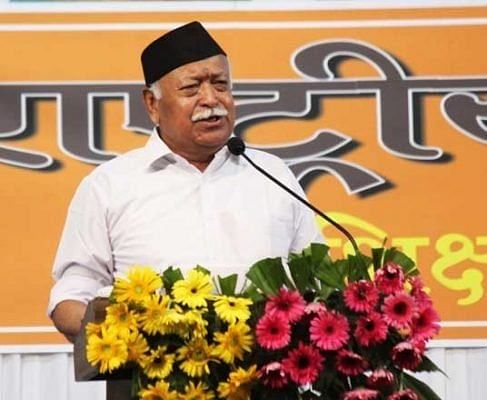 Occasionally, RSS chief Mohan Bhagwat is seen to be engaged in calming down the Hindutva hotheads. What prompts him to undertake such an exercise is generally beyond the understanding of impartial observers. But the Sangh Parivar leader’s effort is laudable and undeniable.

His latest observation that there is no need to look for a holy Shivling under every mosque falls in this category of. soothing tempers. What internal calculations made him call for a truce by reining in the rampaging saffron storm-troopers can only be surmised.

It cannot be that he has been influenced by US secretary of state Anthony Blinken’s latest statement about the attacks on the places of worship of the minorities in India. Normally, the BJP government dismisses such criticism as the comments of the uninformed or the biased. The RSS will be aware of such knee-jerk reactions of the BJP.

Even then, the RSS must have sensed that the continuing petitioning of the judiciary to dig deeper under almost every mosque in search of the remnants of temples has the potential of a communal flare-up with damaging consequences for the country’s social fabric and investment climate.

The RSS may have also surmised that the relentless targeting of mosques is only strengthening the hawkish elements in the saffron brotherhood, thereby straining the discipline of the RSS and its affiliates like the BJP and the Vishwa Hindu Parishad.

Such a breakdown of discipline had led to the demolition of the Babri masjid. The BJP may have gained politically from the discretion, but it resulted in the Hindus being identified as intolerant and criticized on the lines of Blinken’s admonition.

It has to be remembered that earlier, too, Bhagwat had sought to douse the communal flames by arguing that the Hindus and Muslims share the same DNA and are, therefore, brothers under the skin.

That his advice did not have the desired effect is evident from the latest saffron drive to right the “historical wrongs” by breaking mosques just as the Muslim invaders had broken temples in medieval times. But what may have passed muster in an anarchic world half a millennium ago when the norms of conduct lacked today’s sobriety is unacceptable in the 21st century.

In recent times, only Nazi Germany made it a practice of destroying Jewish synagogues and the Ku Klux Klan took to burning churches run by the blacks in America. After them, only the BJP among modern political parties has been associated with attacks on the places of worship of a “rival” faith.

Rather than the RSS chief, it would have been better if senior BJP leaders had called for restraint against the targeting of mosques. But if they did not do so, the reason perhaps is that they expect a political dividend from the ratcheting up of communal tension, especially on the eve of the forthcoming assembly elections in Gujarat and Himachal Pradesh.

Another reason why the senior BJP leaders may have left it to the RSS sarsanghchalak to instill sense in the minds of the Hindutva Gestapo is that they are not sure if their advice or reprimand will be heeded. Arguably, the storm-troopers can no longer be controlled. Once the genii of toxic fundamentalism is allowed to come out of the bottle to serve a political purpose, no ghar wapsi is possible for the demon.

As it is, the parivar’s game plan has been to “liberate” the Ayodhya, Varanasi and Mathura shrines out of the estimated 3,000 temples which were destroyed by the “invaders”. But the saffronites maintain that if the Muslims hand over these three, then the others will be spared.

But who will guarantee that the rampage of the Rambhakts will stop after the acquisition of the Ayodhya, Varanasi and Mathura sites? Will not the destructive appetite of the karsevaks be whetted once all the three places of worship are “liberated”, of which Ayodhya is already in the bag?

It is also clear that it will not be possible for anyone outside the saffron brotherhood, such as the secularists, to give a call for moderation as the RSS chief has done. If anyone in the secular camp gives such a restraining advice, he will be roundly condemned by the Hindutva group as pro-Muslim and anti-national.

It is up to the Parivar, therefore, to bring its own house in order. Otherwise, it is entirely possible that the crusading zeal of the Hindu zealots will not only endanger national unity, but also shake the RSS-BJP structure to its foundation. (IPA Service)