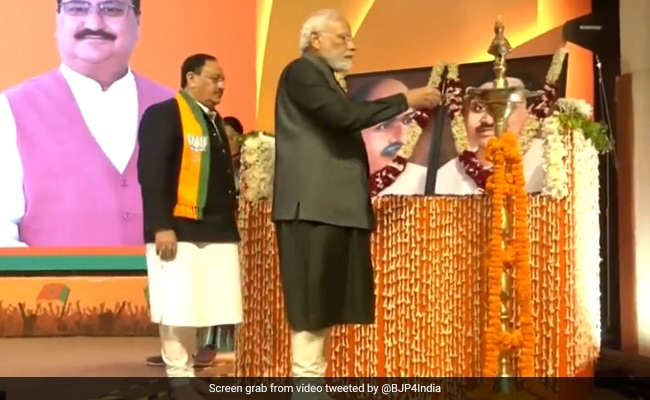 Prime Minister Narendra Modi suggested to the party leaders present in the BJP’s national executive meeting on January 15 to undertake tasks that will be instrumental in unifying the country in the true sense in the context of the 2024 Lok Sabha poll.

PM will address the concluding session of the BJP’s National Executive Meeting on Tuesday.

Sources present in the meeting said the PM, during the presentations given by the different members on the work done in their state, took the mic to suggest what the leaders should do to ensure that the opposition will not be able to mislead the electorate and Centre’s schemes and contributions for the people are clearly demarcated.

Some of the observations were made keeping in mind the assembly polls this year, especially the states, which are crucial for the party.

Among a set of observations made by the PM, Telangana had a special mention.

Five members each from Morcha and the state unit of the BJP should be sent to Telangana to join the state-wide Yatra that Telangana chief Bandi Sanjay is organising. “There are two objectives that will be met by doing so. First, the state unit will get a boost when the leaders from other states will come and encourage them by participating in the Yatra. Second, the leaders from other states would learn from the struggle of the Telangana leaders about fighting against the incumbent government,” a source told News18.

Another suggestion given by the PM was to organise more religious festivals such as ‘Kashi Tamil Sangamam’ where people from one state would participate in the rituals and connect with others, drawing religious practices from the same source. This comes in the backdrop of Tamil Nadu state chief K Annamalai speaking about the success of the ‘Kashi Tamil Sangamam’ in which 25,000 Tamilians had participated initially but more than 1 lakh footfall was expected.

The PM also suggested the party should invite non-political people to different forums to make them aware of the government policies and welfare works. “The idea is that these people will then go to their states (non-BJP) and will be able to compare the development works done by the BJP and others,” said the source.

PM also praised the struggle and resilience of BJP workers of the state unit of West Bengal, saying “no amount of praise is enough for them, the manner in which they turned around”.