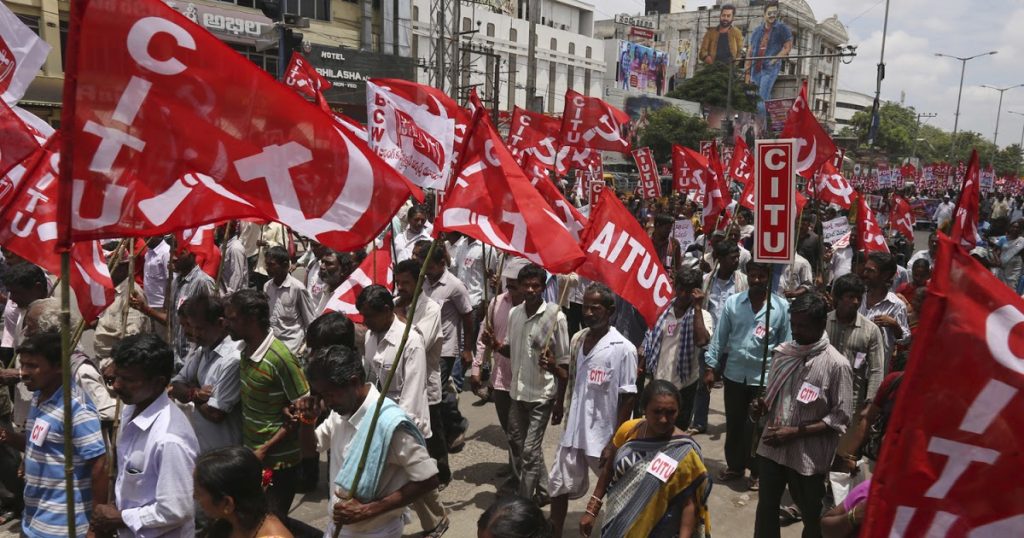 Two-day workers strike across India on March 28-29 on the call of the joint platform of 10 Central Trade Unions (CTUs) – INTUC, AITUC, HMS, CITU, AIUTUC, TUCC, SEWA, AICCTU, LPF and UTUC –  and Sectoral Federations and Associations is getting larger support, barring from the pro-government Bharatiya Mazdoor Sangh (BMS), which has roots in RSS-BJP and naturally supports Modi government, though large number of workers affiliated with the BMS are going to participate in the general strike. In spite of the impending threat of Essential Services Maintenance Act (ESMA), many roadways and electricity workers, such as in Haryana and Chandigarh, have decided to strike. It should be an eye-opener for the Modi government since the country seems to be heading towards an ugly turn to embitter the already strained industrial relations in the country.

The strike has not only found larger support from the workers of organized sector but also from the unorganised sector. Preparations for strike are in full swing. Joint state level conventions of central trade unions are being organized along with sectorwise conventions in public and corporate sectors. Conventions are also being organized in the unorganised sectors such as scheme workers, domestic workers, hawkers, beedi workers, construction workers etc. Workers in railways and defence sector will also be holding protests mobilizations at more than 750  places across the country in support of the strike. Coal, steel, oil, telecom, postal, income tax, copper and financial sector, including banking and insurance, employees are also joining the strike, while farmers under the banner of Samyukta Kisan Morch has also decided to observe rural bandh on both the days. Political parties in opposition are also supporting the strike and the workers’ demand. Even students unions have decided to participate. The joint platform have also made appeal to various unions at state levels to join the strike, and many of them are also likely to join it, despite warning from the state governments.

It is irony that the BMS, which is itself a pro-BJP-Government central trade union, has alleged the joint front of the Central Trade Unions call for two-day strike to be ‘politically motivated’ to ensure the survival of selected political parties. The statement issued by BMS has said that the striking unions are affiliated with political parties and have nothing to do with workers’ interests. “The indulgence of farmers and student unions in these strikes has made it obvious that these unions don’t care a bit about workers’ interest but only use the workers to serve the political interests of their political parties,” the statement read. It also called upon all other striking trade unions to “shed off their political affiliations” and stated that BMS would be happy to lead a “joint non-political labour movement.” Their statement proves that BMS has only political inhibition due to its roots in RSS-BJP, and indirectly admits that there are labour issues needs to be addressed. It should also be recalled that BMS itself has earlier said that there are issues to be addressed even in the two out of the four controversial labour codes that the striking CTUs have been demanding to be withdrawn.

‘Save People, Save Nation’ is the slogan with which the workers are going on strike in which, the CTUs said in a joint statement, at least 20 crore workers will be participating. The strike call is given against the “anti-worker, anti-farmer, anti-people, and anti-national policies” of the centre, CTUs said in the joint statement. They have also termed the Centre’s decision to reduce the interest rate on provident fund from 8.5 per cent to 8.1 per cent and the increase in the prices of petrol, LPG, kerosene, and CNG, direct attacks on workers.

Their 12-point charter of demand includes scrapping of the four controversial labour codes and the Essential Defence Services Act; Accept the six-point charter of demands, post repeal of Farm Laws, of the Samyukta Kisan Morcha (SKM); No to privatisation in any form and scrap the National Monetisation Policy (NMP); Food and income support of Rs 7,500 per month to non-income tax paying households; Increased allocation for MNREGA and extension of employment guarantee scheme to urban areas; Universal social security for all informal sector workers; Statutory minimum wage and social security for Anganwadi, ASHA, Mid-day meal and other scheme workers; Proper protection and insurance facilities for frontline workers serving the people in the midst of pandemic; Increase in public investment in agriculture, education, health and other crucial public utilities by taxing the rich through wealth tax etc in order to revive and revamp the national economy; Substantial reduction in Central Excise Duty on petroleum product and concrete remedial measure to arrest price rise; Regularisation of contract workers, scheme workers and equal pay for equal work for all; and Cancellation of National Pension Scheme (NPS) and restoration of old pension substantial increase in minimum pension under Employees’ Pension Scheme. All other organisations participating in this general strike have their own special demands also.

The demands are prima-facie valid and are being discussed in the public domain for a long time. However, Modi government has been shying away from any meaningful open discussion with the striking central trade unions to reach a solution that is long overdue. Any delay or one sided decisions by the Centre would only cause further deterioration in the industrial relations already under great stress. (IPA Service)