Many Progressives Have Won In Key Seats In The U.S. Midterm Elections 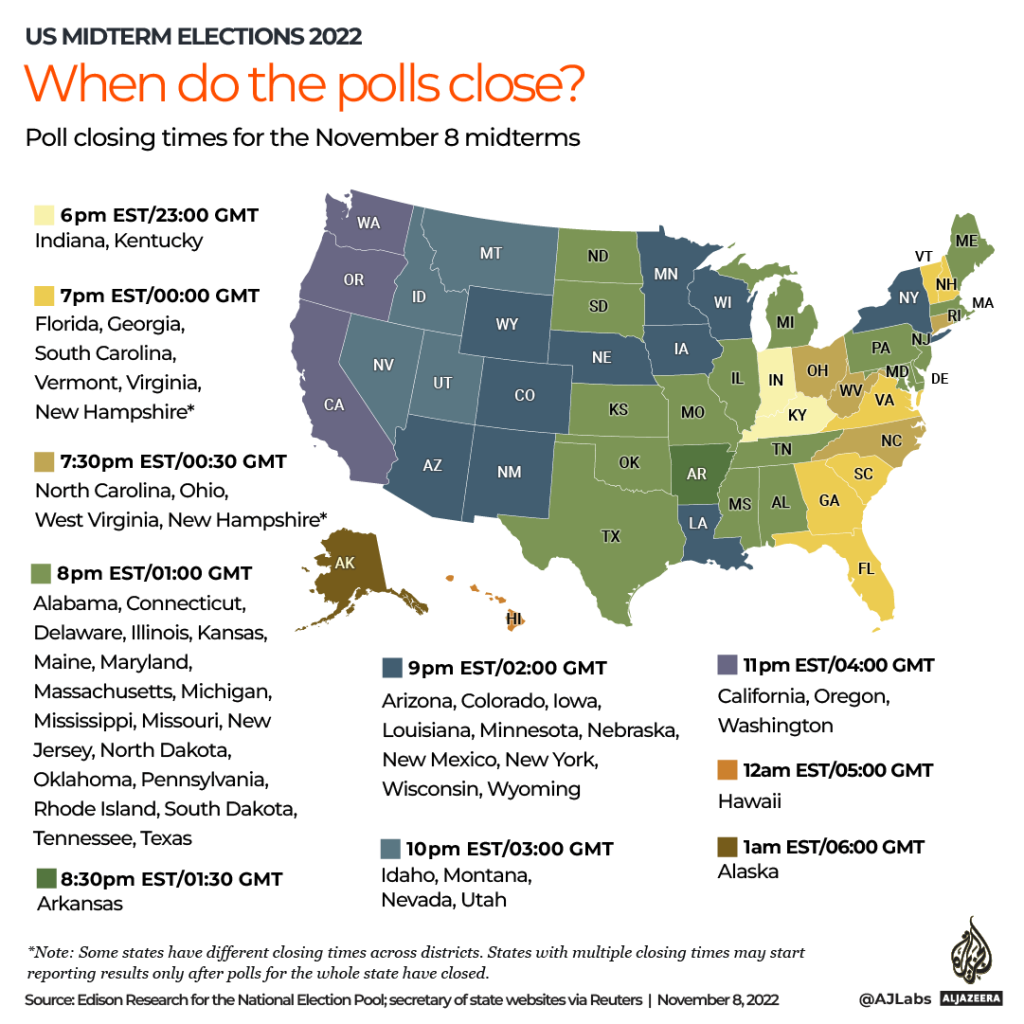 Corporate media, industry-funded think tanks, and Democratic operatives were chomping at the bit to blame the party’s anticipated midterm election losses Tuesday on progressives and a prefabricated narrative about Democrats’ supposedly extreme brand. Then, the results began rolling in.

It’s not clear yet which party will control the House or Senate, but this was not the “red wave” that polls had projected, nor the midterm bloodbaths that Democrats faced under President Barack Obama in 2010 and 2014. In recent decades, the party controlling the White House has almost always lost seats in the midterms, with the stark exception of the 2002 midterms when Republicans took back the Senate thanks to the momentum of President George W. Bush’s “war on terror.”

While voters this year declined to offer a stiff rebuke of the party in power, they indicated via ballot measures, exit polls, and large preelection surveys that on key issues such as abortion rights, health care, higher minimum wages, workers’ right to collectively bargain, and legalized cannabis, the electorate is more progressive than elected officials and corporate media pundits care to admit.

Many factors can explain the Democrats’ unexpectedly strong performance in a midterm cycle, such as the Supreme Court’s massively unpopular decision to strike down a constitutional right to an abortion and voters’ apparent rejection of Republican candidates closely tied to former president Donald Trump. But there is another equally important takeaway that Democrats should take to heart.

The results suggest that when the Democratic Party listened to its progressive flank and adopted bold proposals like the child tax credit, student debt cancellation, and massive climate spending, voters rewarded its politician

The conventional wisdom for years has been that Democrats running in swing states must present themselves as corporate-friendly conservatives. But in the Lever’s deep dive on the Pennsylvania election, the state’s former auditor general told us that gubernatorial candidate Josh Shapiro “maintained a centre-left profile the whole time, and I think that’s critical to winning statewide.” The election results bear that out.

In the Keystone State, both Shapiro and Senate candidate John Fetterman ran successful populist campaigns and significantly outperformed President Joe Biden’s 2020 results in the most traditionally Republican parts of the state. The same goes for Ohio: though Democrat Tim Ryan lost the race, he campaigned on a pro-worker agenda, and Democratic performance similarly increased in the state’s GOP strongholds. And in Colorado, Democratic senator Michael Bennet campaigned on populist economic measures like the expanded child tax credit and likewise benefited from higher Democratic performance in the state’s GOP regions.

By contrast, more conservative Democratic statewide campaigns in North Carolina and Iowa coincided with the opposite trend: higher GOP margins than 2020 in Republican-leaning parts of the state. In Virginia, Democratic representative Elaine Luria also lost a close race after calling a ban on congressional stock trades “bullshit” — and being attacked for those comments on the campaign trail.

The day after the election, Morgan Stanley analysts blasted out a memo saying that Biden’s party preventing an expected GOP wave would “undercut the notion that inflation is an electoral liability for the Democrats.” The memo added: “Investors could see this result as permission for the party to ease the political and legislative constraints that kept Congress from enacting some of the fiscally expansionary policies that were part of President Biden’s original ‘Build Back Better’ agenda.”

The Fox News voter analysis found that the majority of Americans hold progressive views on health care, guns, race, and other key issues. The poll results clash mightily with conventional wisdom among Democratic operatives: just a few days ago, for instance, Democratic data bro David Shor was quoted in Politico Magazine as saying, “There is no amount of pressure that is going to make Democrats create Medicare for All, because the public doesn’t want it.”

The Fox News poll, however, found that 65 percent of the electorate think it should be the federal government’s responsibility to make sure that all Americans have health care coverage. Fox’s 2020 preelection survey found similarly high support — 70 percent — for the idea of allowing people to buy into a government health care plan, commonly known as a public option. Biden campaigned on a public option, but hasn’t mentioned the idea once as president.

Thanks to a handful of under-the-radar House races, congressional progressives are set to expand their ranks with new arrivals like Summer Lee in Pennsylvania, Delia Ramirez in Illinois, Maxwell Frost in Florida, and Greg Casar in Texas.

Progressives also notched victories on their chosen ballot measures, suggesting voters support policies like raising the minimum wage and taxing the rich, even as their elected politicians fail to enact them.

Pro-choice measures swept at the ballot box, as voters enshrined abortion access in state constitutions in California, Michigan, and Vermont, as well as and defeated an antiabortion measure in Kentucky. Nebraskans approved a $15 minimum wage, and voters in Washington, DC, voted to eliminate the subminimum wage for tipped workers. (Take that, celebrity chef José Andrés.) In Massachusetts, voters approved a 4 percent surtax on incomes over $1 million.

That’s not all: a pro–collective bargaining ballot measure won by a wide margin in Illinois. Voters legalized cannabis for recreational use in Maryland and Missouri. In South Dakota, voters passed a referendum to expand Medicaid. Rent control measures passed in Richmond, California, as well as Orange County, Florida, though the Florida measure has an uncertain future, thanks to a court challenge from landlords.

Democrats may have young voters — and student debt cancellation — to thank for the party’s surprisingly good performance on Tuesday night. Preliminary data suggest voters under the age of thirty supported Democrats in House races by nearly a 2-1 margin. While that’s about the margin by which young voters have favored Democrats in the past couple of cycles, and the youth share of the electorate has held steady around 12 percent, young voters are the only age demographic to favor Democrats by a strong majority.

This is exactly what progressives said would happen when they pressured Biden for over a year to cancel student debt. Support among young voters for student debt cancellation was as high as 85 percent, according to the Harvard Youth Poll conducted in spring 2022. An April Data for Progress poll found that nearly half of voters in key battleground states would be more likely to vote if Biden delivered on his campaign promise to cancel student debt.

The election results have even forced one top critic of student debt cancellation to admit he was mistaken. “I thought student debt relief was bad policy and bad politics,” tweeted former Bush speechwriter David Frum. “I still think it [is] bad policy — but looking at the youth vote surge, [it’s] hard to deny its political impact. And if it helped save the country from Trumpism, the positives more than pay for the negatives.”

Democrats passed the largest climate bill in US history this summer without a single Republican vote, delivering massive investments in clean energy. But despite their unified opposition, Republicans barely attacked the legislation on the campaign trail.

There may be a good reason for that: the Fox News voter analysis survey found that 53 percent of Americans believe US energy policy should aim to expand the use of alternative energy, including wind and solar, rather than expand fossil fuel production. The same poll found that 61 percent of Americans are very or somewhat concerned about the effect of climate change in their communities.

A major factor in Democrats’ stronger-than-expected showing nationally appears to be the rock-bottom expectations of their voters. An NBC exit poll captured a deep sigh of resignation at the ballot box, with Democrats winning among voters who “somewhat disapprove” of Joe Biden’s job performance. Overall, more than seven in ten voters said they are “dissatisfied” or “angry,” according to exit polls conducted by Edison Research.

Such results suggest that Democratic voters weren’t inspired to vote for their candidates; they just couldn’t tolerate the alternatives.

So if Democrats manage to hang on to control of Congress, it will be hard to argue that they have their tired stay-the-course strategy to thank. Instead, it’s time for the party to take some big, bold swings. This spring, a little-noticed statistic in an NBC News poll found nearly two-thirds of Democratic voters said they wanted a candidate “who proposes larger-scale policies that cost more and might be harder to pass into law, but could bring major change” — not someone who fiddles around the margin.

In fact, the new Fox News voter analysis survey found that 53 percent of Americans said the “government should do more to solve problems,” compared to 47 percent who said the government is “doing too many things better left to businesses and individuals.”

The famous ending of the classic 1972 film The Candidate shows the Democratic senate nominee winning the election and then turning to his aide and asking: “What do we do now?” There’s a similar dynamic at play right now. In general, Democrats did not really campaign on an agenda beyond promising not to let Republicans steal elections or further erode reproductive rights.

That leaves us with an open question: If the party somehow retains control of Congress, what does it plan to do for the next two years? The election results show that Democrats were not punished for huge investments like the American Rescue Plan, the Inflation Reduction Act, and student debt relief. So maybe it’s time to go further and advance a true populist economic agenda — through active and ongoing grassroots pressure. (IPA Service)