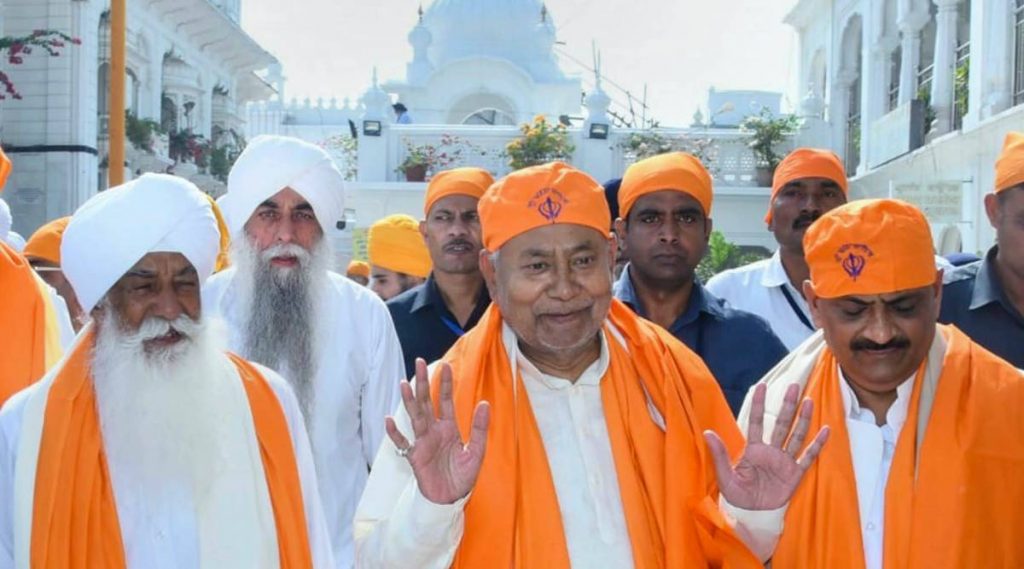 Bihar Chief Minister Nitish Kumar has supported reservation for the backward castes, and openly endorsed a caste census as proportionate with the population across the country. He has also called for raising the 50 percent cap on quotas for Scheduled Castes, Scheduled Tribes and Other Backward Castes. However, he has also said that his party had always been favouring and suggesting the 10 percent quota for the Economically Weaker Sections (EWS).Political observers say that CM Nitish and other national Opposition leaders could use the demand for population-proportionate reservation for targeted castes to counter the Kamandal (religion-based) and jingoistic politics propagated by the BJP. Nitish Kumar’s non-alliance with the BJP and his consequent return to the opposition fold has revived the talk about him as a consensus candidate for the 2024 general election. But it depends on the UPA and regional parties whether they would extend support to Nitish as joint PM candidate, or not.

Ahead of the upcoming December 5 by-polls for assembly seats of Khatauli, Rampur as well as the Mainpuri (Lok Sabha) seat, the RLD has magnified its activities in Uttar Pradesh’s sugar belt, its political stronghold. Rajya Sabha MP and RLD chief Jayant Chaudhary has asserted that he was assured of fielding a candidate from Khatauli as part of the party’s alliance with the Samajwadi Party. Earlier this year, RLD’s candidate from Khatauli, Rajpal Singh, had lost to BJP’s Vikram Saini. The latter now stands disqualified as an MLA following his conviction in the Muzaffarnagar riots case, necessitating the by-poll. Meanwhile, Samajwadi Party has announced the name of Dimple Yadav, the wife of party chiefAkhilesh Yadav, as its candidate for the Mainpuri parliamentary seat, which fell vacant after the death of Mulayam Singh Yadav. On the other hand, Shivpal Yadav’s Pragatisheel Samajwadi Party-Lohia (PSPL) has said a final decision on the Mainpuri seat would be taken by the party leadership. Dimple Yadav’s candidature is seen as part of SP’s efforts to carry forward the legacy of Mulayam Singh Yadav, her father-in-law,at the seat, considered a stronghold of the party since 1996. Her selection is also being seen as an attempt to bring in a semblance of unity among the party cadres ahead of the by-poll. The Mainpuri parliamentary constituency has five assembly segments, including Mainpuri, Bhogaon, Kishni, Karhal and Jaswant Nagar. While SP won three of these seats, BJP got two in the 2022 Assembly polls.

GUJARAT CONGRESS HOPES TO CASH IN ITS POLL ALLIANCE WITH NCP

With the pressure mounting high upon the Gujarat Congress leaders, party icon Rahul Gandhi is expected to address two or three large rallies in the poll-bound state. Congress is strategically working on its back-to-basics theory of KHAM (Kshatriyas, OBCs, Harijan, Adivasi, Muslim) which helped the party win 149 seats in 1985, and 139 in 1980. Congress asserts that it has a strategy in place, and has focused on localised door-to-door canvassing to mobilise support. Congress is also exploring an alliance with NCP in Gujarat which will go to polls on December 1 and 5. Sources said the discussions on sea-sharing has started and Congress’ Gujarat in-charge Raghu Sharma and senior NCP leader Praful Patel are expected to take it forward.

Newly elected Congress President Mallikarjun Kharge has urged his party leaders in Karnataka to bridge their differences and work towards bringing the Congress back to power. CLP leader Siddaramaiah too agreed that there might be small differences between leaders within the party, but everyone should take it as a challenge to oust the BJP government in the state. Recently, the 80-year-old Dalit strongman Kharge attended the ‘Sarvodaya Samavesha’ at Palace Grounds in Mysore to mark his debut visit to Karnataka after being elected as the Congress’ national president.

With RJD retaining Mokama by a handsome margin and the BJP managing to hold on to Gopalganj by the skin of its teeth in the by-polls, situation in Bihar is back to status quo. This was the first difficult test of ballots in the state since JD(U) quit the NDA and shook hands with the Mahagathbandhan to form a new government in August. BJP candidate Kusum Devi polled 70,053 votes against RJD candidate Mohan Prasad Gupta’s 68,259.Political observers have claimed that BJP could retain Gopalganj only because the AIMIM had put up a candidate, Abdul Salam, who bagged over 12,000 votes, and cut into RJD vote share. Another factor was that Lalu’s estranged brother-in-law Sadhu Yadav fielded his wife Indira Yadav as a Bahujan Samaj Party candidate. She polled around 9,000 votes. A majority of these 21,000 votes were supposed to have come from the previously RJD vote bank. The AIMIM and BSP candidates cut the Muslim and Yadav votes that traditionally go to the RJD in Bihar. (IPA Service)