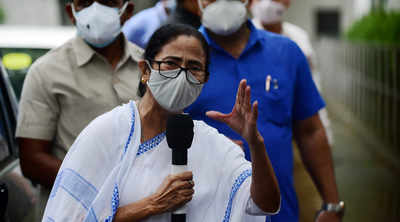 Is the rope in the game of tug of war slipping through Mamata Banerjee’s hands? At least Mamata gives this impression as she once again asks every political party opposed to “BJP’s oppressive rule” to unite. The problem is the only fly in the ointment of opposition unity is Mamata herself!

The West Bengal Chief Minister is in the habit of sending conflicting signals post every one of her calls for opposition unity. She has always ended up giving the impression she’s more focused on clearing the field of potential rivals to her prime ministerial ambitions than in cobbling unity to beat the BJP.

A rival like Rahul Gandhi, for instance, for whom 2024 could be the last chance for redemption—or final destination as in the franchise Hollywood movie. Mamata Banerjee’s shifting sands unity calls haven’t left anybody perplexed. The way she’s been treating the Congress is a lesson in Mamata-esque.

After the ‘khela hobe’ in West Bengal, Mamata landed in Mumbai and sought to marginalize the Congress by questioning the existence of the UPA. Her choice of epithets for Rahul Gandhi, the last Gandhi family hope, hasn’t won the Trinamool the Congress’s hand in marriage.

Not too long ago, on March 12, Mamata Banerjee, asking for Opposition unity to defeat the BJP, had summarily dismissed the Congress as a party of no consequence because the Congress did not have “fire in the belly” to win! “There is no point in depending on the Congress,” she said.

But then, among the many Mamata traits is ‘fickle’. In her latest call to defeat the BJP, Banerjee wants the Congress in the circle of Opposition unity. What has changed? For one, Birbhum happened. Two, the Calcutta High Court asked the CBI to investigate. Three, Mamata’s nephew Abhishek Banerjee has been summoned to Delhi by the Enforcement Directorate.

The point is, the Modi government for all we know isn’t “the government that the country deserved”, and the BJP is authoritarian and communal to the point of birthing bigots, isss impervious to human suffering and vindictive to the point of using central agencies to unseat elected state governments, all that and more, but if Mamata Banerjee wants opposition unity to beat the BJP to submission, she has to respect every opposition party.

In business analytics, there is the concept of “knowing your potential customer” to convert him from “lead” to “confirmed subscriber”. Paraphrase, and ask this about Mamata’s frequent calls for opposition unity, which have been piling up like car-wrecks on the highway, and Mamata betrays a complete lack of “knowing her allies.”

Is it Mamata’s combative nature, which won her West Bengal, in the first place? The same attribute which helped her beat the BJP in 2021. Will combative and aggression win Mamata allies to beat the BJP at the national level? The answer is there in her latest call for opposition unity.

A “week is a long time in politics” and it’s already a fortnight since she expressed no-confidence in the Congress. Her letter dated March 27, is a flip-flop: “I urge everyone to come together for a meeting to deliberate on the way forward at a place as per everyone’s convenience and suitability. Let us commit to the cause of a unified and principled opposition that will make way for the government that our country deserves.”

If Mamata Banerjee wants to be Prime Minister, she should learn from Narendra Modi, who in 2012-13 kick-started a nationwide campaign to get the BJP’s PM candidate approval. His campaign used modern gizmos and gimmicks to worm his way into a section of the electorate’s psyche. Mamata should be getting a slogan to beat ‘Abki Baar…’

‘Didi’ shouldn’t be seen to be squabbling and wasting time.

Opposition unity is a chimera. Personal ambitions of opposition leaders stand in the way. If Mamata wants to be PM, she should turn the TMC into a truly national party, open offices throughout India, in every state and district, kick-start a nationwide membership drive like Arvind Kejriwal is doing after AAP’s Punjab victory. Does Mamata have the “fire in the belly” to do all that? (IPA Service)