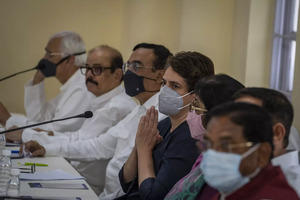 LUCKNOW:AICC general secretary and in charge of Uttar Pradesh  Priyanka Gandhi has taken the full responsibility  of worst performance of her party in UP Assembly elections  and asked the state leaders to prepare road map to face Lok Sabha polls in 2024.

Soon after the results were announced Priyanka Gandhi convened the review meeting where all the issues concerning campaign, strategy and ticket distribution were discussed at length. Priyanka Gandhi listened to the views expressed by senior leaders as to what went wrong during the campaign and the strategy to  before the elections.

The subject of raising people’s issues time to time and taking them to street and organise demonstration on streets was also discussed. It would be worth mentioning here during last few years Congress under the leadership of Priyanka Gandhi was seen fighting on people’s issues. She not only enthused party leaders and workers but also managed to reach to families of victims all over the state. How Congress workers fought during corona period and Priyanka Gandhi arranged buses for migrant labour, is known to people of state.

Although AICC president Sonia Gandhi has sought resignation of UPCC President Ajay Kumar Lallu and he has resigned, no replacement has taken place. There is a need for his replacement who should assert and should inspire confidence in rank and file of the party.

There is no doubt that  the Congress  registered worst ever performance with only two candidates Aradhna Mishra from Rampur Khaas in Pratapgarh and Virendra Chiudhry from Pharenda in Maharajganj making to UP Assembly  and  vote share of party came down to 2.33 per cen in 2022 elections  from 6.2 per cent in 2017 assembly poll.

The manner in which 380 candidates of Congress out of total 399 lost their deposit is a sad commentary on the decline of the party which ruled for several decades before 1989 when Janata Dal was voted to power and Mulayam Singh Yadav became Chief Minister.

The party could not open account in Rae Bareli and Amethi considered to be bastion of the party till 2019 when Rahul Gandhi lost to Union Minister Smriti Irani. The experiment of Priyanka Gandhi to give tickets to 159 women with slogan Ladki Hu Lad sakti hu miserably failed as all of them lost their deposits. Earlier winnability used to be the criterion for selection of candidates.

Although Priyanka Gandhi addressed 200 virtual/physical meetings during the elections but her massive public meetings and impressive road-shows could not be converted into votes due to a weak organisation.

There have been serious allegations regarding ticket distribution and role of money was also levelled by those Congress leaders who recently were removed by the party for speaking against the leadership. It was also pointed out that over 30 former MPs, MLAs and other leaders left the party as they failed to see any future in coming years. Prominent among those who left the party included former union ministers Jitin Prasad and RPN Singh.

Senior congress leaders feel that Priyanka Gandhi should bring back all Congress minded people back to party fold and infuse confidence in party workers to prepare for Lok Sabha polls. (IPA Service)

Mamata Will Have A Hard Time In Getting Response To Her Call For Opposition Unity
Posting....