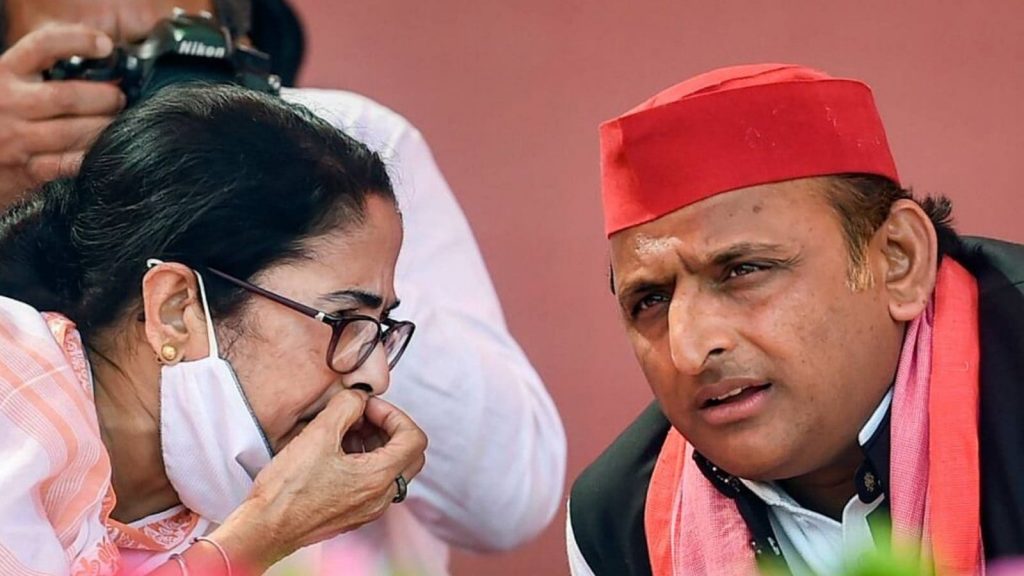 Mamata Banerjee blasted at the BJP government in Uttar Pradesh as she addressed a gathering in support of Samajwadi Party chief Akhilesh Yadav in Varanasi on Thursday. The West Bengal CM alleged that she had to face the “destructive mentality” of BJP workers on Wednesday on her way to Varanasi, which is a sign of frustration as the party is going to lose in the state election.

Speaking at the joint rally of Samajwadi Party and its alliances in Varanasi, Banerjee said, “I want to thank all the people of Varanasi who have given me a chance to come here and speak. I went to the Holy Ghats of Varanasi yesterday and I felt happy. While I was on my way to Ghats from the Airport, then on the way I saw some BJP workers with destructive mentality, stopped my car, pushed my vehicle and attacked my vehicle. This shows they are losing badly in UP. They told me to go back, I am not ‘darpok’ (coward), I am ‘ladaku’ (fighter). Yesterday when they were abusing me, I got out of the car and stood in front of them, I wanted to see what they could do. But they were all ‘darpok’. I want to thank them to clear the message that the BJP was losing badly, else they would not have done that. I will come back a thousand times, Khela Hoga.”

She further accused the BJP of disrespecting women and asked why can’t she go to Varanasi, Mathura, Azamgarh, Lakhimpur or Allahabad? “You all come to Ganga Sagar in West Bengal, ask your people there how well they all are treated… The UP government disrespected young boys and girls in the name of ‘anti-Romeo squad’. Where were these BJP people when people died walking to their home during Covid?” asked Mamata

Deflecting her rant towards Prime Minister Narendra Modi, Banerjee accused the central government of “not doing anything” for the stranded Indian students in war-torn Ukraine. “If you (Modi) have such good relations with Putin Ji (Russian president) then you must have known about the attack three months in advance. Why did the government didn’t do anything then? And now the government tells Indians to come back on their own. Many are stuck in bunkers…” she alleged.

She also said the BJP indulges in temple talk and the Hindu-Muslim debate during the elections. “I don’t have any issue with the slogan of ‘Jai Siya Ram’, but why don’t you (BJP) take the name of Sita Mata? Instead you say ‘Jai Shri Ram’. It is ‘Jai Siya Ram’,” said Banerjee as she recited Durga Stuti from the stage.

The Trinamool Congress supremo also attacked the BJP government over demonetization. “These people did Notebandi in the name of ‘achhe din’ and now they are selling farming, railways, airports, banks and even life insurance in the name of ‘achhe din’. They even promised Rs 15 lakh in your bank accounts, did they come? Unemployment is increasing, boys and girls are moving out of state in search of jobs…”

The West Bengal CM appealed to the people to vote for SP-led alliance and promised that she would attend the oath-taking ceremony of Akhilesh Yadav as the next CM of the state.