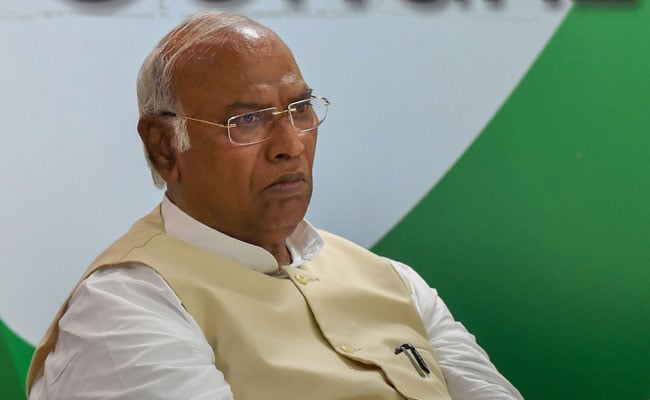 Mallikarjun Kharge is the latest to join the contest for Congress president as the candidate backed by the party high command and will resign as Leader of Opposition in Rajya Sabha in accordance with the ‘one person one post’ rule, said sources.

Kharge, the Leader of Opposition in Rajya Sabha, will file his nomination for the October 17 election today as the third candidate alongside Digvijaya Singh and Shashi Tharoor, sources said.

Tharoor and Singh too are expected to file their nomination today, the last day of applications. The deadline for applications for the contest is 3 pm.

Congress veteran KC Venugopal, a key aide of the Gandhis, last night conveyed to Kharge the high command’s decision for him to join the race despite the Gandhis saying that they would remain neutral, sources said.

Kharge will resign as the Leader of Opposition in Rajya Sabha in accordance with the ‘one person one post’ rule decided by the party earlier this year, said sources. This was the same rule applied to Rajasthan Chief Minister Ashok Gehlot who opted out of the race yesterday.

Another Congress leader, Ajay Maken was also considered for the contest till last night as a section of Congress leaders insisted on a younger leader for the job, said sources. Mukul Wasnik, one among the “G-23” leaders, could also be a part of the race, they had indicated.

The new names emerge after Ashok Gehlot opted out of the contest yesterday after meeting Sonia Gandhi in Delhi. Gehlot told reporters he also apologized to Mrs Gandhi for the public rebellion by his loyalists. His arch-rival Sachin Pilot too met Mrs Gandhi yesterday.

Gehlot was seen as the first choice of the Gandhis for the top post until his chances were damaged by the rebellion by his loyalists who said they would not accept Sachin Pilot, who had rebelled against him in 2020, as his replacement as the Chief Minister.

Samajwadi Party Focusing On Kurmis And OBC’s Ahead Of 2024 Polls
Posting....