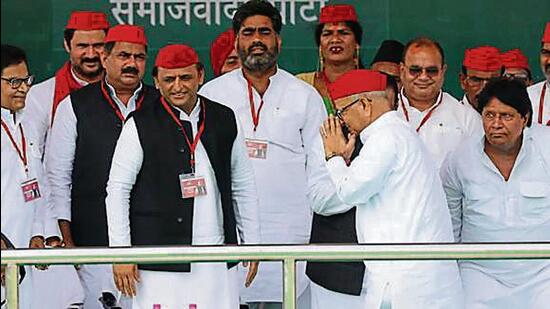 Ahead of general elections in 2024, the Samajwadi party has given   main focus on kurmi and other OBC votes. At the recent Uttar Pradesh state convention, Naresh Uttam Patel was elected as the state president of the SP for the second time in a row. The SP’s move is being seen as an attempt to consolidate the numerically-significant backward class voters to rally behind the party. Patel hails from the OBC Kurmi caste, which has a sizable presence In the state’s central and eastern belt, they can play a key role in elections in the Pratapgarh, Prayagraj, Sonbhadra and Mirzapur regions. Kurmis constitute about 7-8 per cent of Uttar Pradesh population. On the other hand the way Swami Prasad Maurya has given importance to the convention, it seems that Akhilesh Yadav wants to give a message to other OBC community to garner support for his party.

Bihar Chief Minister Nitish Kumar by mistake addressed to his deputy Tejashwi Prasad Yadav as mukhya mantri at an event which has triggered a series of barbs from the saffron party. BJP stated that he needs to go to an ashram. While ruling ally RJD said this only shows the growing bond among the two parties. This happened while Nitish was announcing the names of those appointed as veterinary and district fisheries officers at an event of the Animal Husbandry and Fisheries Department. He called his deputy mananiya mukhya mantri (honourable chief minister) Tejashwi Prasad Yadav, and moreover did not correct his error throughout his speech.

The Gujarat Congress leadership recently n took out a rath yatra in Saurashtra to influence the Patel community. Chanting the slogan “Chalo Congress ke saath, Maa ke dwar”, thousands of party workers under the leadership of state unit chief Jagdish Thakor and Shaktisinh Gohil offered prayers at the temples of Maa Umiya and Maa Khodiyar, the reigning deities of the Leuva and Kadva Patels. The rath yatra carried out and visited Khodaldham, the religious seat of power of the Patidar community where Naresh Patel the most influential leader welcomed the participants. However Gujarat leadership is now attempting to get Priyanka Gandhi Vadra to lead extensively the campaign for the next two months as the Assembly elections are expected to be held in December.  Rahul Gandhi, who led the Gujarat campaign in 2017 and made a huge impact, is likely to be seen this time in a guest appearance only.

Former chief minister Vasundhara Raje is bracing for a fight to present herself as a CM face for the BJP, irrespective of the fact whether the party’s top leadership’s thinking. . A slogan has been creating a buzz in Rajasthan “Kaho dil se, Vasundhara phir se” Raje has been embroiled in a tussle for power with state BJP president Satish Poonia, but despite her stature as a mass leader, the buzz is that the BJP high command wants to convince Raje to not contest the assembly elections next year and in return for her sacrifice, the party may permit her to stand for the Lok Sabha elections and be made a minister in the 2024 government. But Raje is silent and waiting for the right time to take a decision whether to stay in BJP or form another political party?

The BJP has decided not to have direct alliance with the Maharashtra Navnirman Sena (MNS) in BMC election. According to sources they cannot afford to lose votes of North Indians against whom MNS chief Raj Thackeray has run public campaign However, the BJP and Maharashtra Chief Minister Eknath Shinde are looking for support of at least one Thackeray to their side. The plan therefore is to let the Shinde-led camp align with the MNS. While Eknath Shinde spoke to Raj Thackeray aspiring to form the alliance with the MNS. But Raj Thackeray has not given any clues of an alliance for BMC elections.  There  is an attempt by the BJP and Shinde camp to bring him on board with a common objective of defeating Uddhav Thackeray-led Shiv Sena which is yet to recover from the defection of 40 legislators after the rebellion launched by Shinde.

Ghulam Nabi Azad launched his party, naming it the Democratic Azad Party. Azad said that the party will be secular in character and action and it will not discriminate among people in the name of religion and communities. It will be a regional party, not a national party. According to political observers, most of the regional parties may not have a major effect on the vote bank as the politics of J&K is clear—the NC and the PDP having influence in Kashmir while the BJP and Congress in Jammu. But it will depend on how aggressively Ghulam Nabi Azad mobilises the vote base of the Congress towards him and influence the assembly polls.  Meanwhile Congress leaders expressed their concern and asserted that many prominent party leaders had joined Azad in J&K. However, National Conference, BJP, and PDP are silent and have not given any views about Azad and are silently monitoring his moves. (IPA Service)

Globalisation Of Agri-Business Is Not Taking Into Account Farmers Interests
Posting....