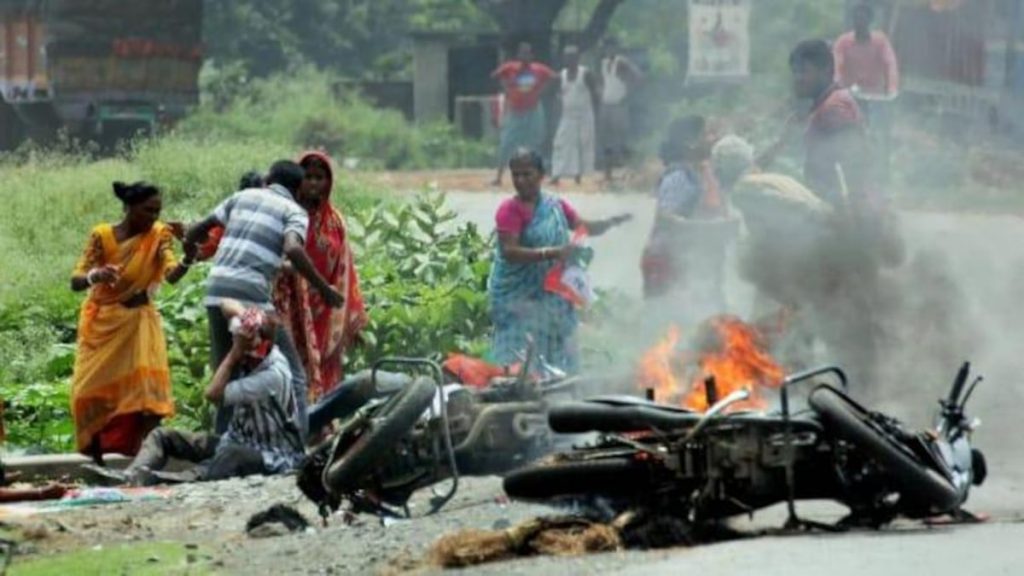 The Hon’ble Calcutta High Court’s decision to entrust the Central Bureau of Investigation (CBI)with the power to probe the ghastly Birbhum village massacre instead of leaving the job to the Bengal police, is commendable: it makes any cover-up job planned by the Trinamool Congress (TMC) more difficult. Also unexceptionable is the Court’s insistence that the peoples’ faith in due legal process must be restored –especially in a woefully misgoverned State!

Positive as such intent is , it is not yet certain that the depraved , politically-backed murderous mobs of Bengal will eventually be punished, going by past experience. The sad truth is that such horrendous political killings recur more frequently in Bengal than elsewhere in India, regardless of the administration in charge. A culture of bombs, guns and knives, punctuated by shocking massacres, prevails. Instances are too many: Sainbari murders, mass killings at Suchpur, Angria, Jharmachgram, Netaitala, Baranagar, Nandigram……

For the record at Bogtui, the death toll is at least 8 (10 according to other estimates), including six women and two children. The disturbances began at around 8.30 p.m. on March 21, culminating in the most horrific violence. Most bodies remained unidentifiable, charred beyond recognition. Several houses had been attacked with bombs, the terrified inmates chopped alive by knives or sickles before being set on fire, their killers locking all exit points.

The police station was 10 minutes away. However despite repeated calls made on mobile phones no policeman came. Local TMC Bloc leader Anarul Hossain forbade their entry. Eye-witnesses say he also stopped Fire brigade personnel from intervening as they tried to put out the fires that broke out in7/8 houses!

However it remained incomprehensible why the police or Firemen had to seek any permission from a TMC bloc President in the first during an outbreak of mob violence.

Locals accused Anarul of organizing the killings to revenge the death of his elder colleague Bhadu Sheikh, also of the TMC. Bhadu had been shot dead a few days ago. Most locals appeared mortally scared to talk about either Bhadu or Anarul (now under arrest).The latter incidentally claimed to be innocent and accused Anubrata Mondal of letting him down, without elaborating.

Bhadu by all accounts was no angel himself. A follower of Anubrata Mondal, he had risen from being a rickshaw puller to a local entrepreneur of considerable eminence, owning several houses, cars and other assets in a few years, with strong support from the TMC. Unconfirmed reports suggested his sudden affluence was the outcome of his active involvement with local illegal sand mining , coal smuggling and sundry other rackets — all part of the TMC‘s infamous ‘’cutmoney culture’ of illegal bribes and commissions from various social welfare schemes and any local economic activity.

The question is, how people like Bhadu and Anarul move up the social ladder and achieve local eminence in parties like the TMC, which is led by a dynamic leader like Ms Banerjee and includes respectable public figures like Dr Amit Mitra, Mr Saugata Ray or Mr Bratya Basu?

The broad answer is, as a growing party the TMC needs and uses its “Bahubalis’’ like Anubrata or Anarulas much as any other party .With special reference to the unwritten dominance of the gun and bombs culture, such men are considered ‘assets’ who keep troublemakers in line, demoralise hostile voters and fight it out for the TMC in pitched street battles.

It needs stressing it is not just the TMC that commits such sins .The more respectable Left parties and even the Congress often behaved no better during their heyday, only not so brazenly — say most observers.

This explains why political parties of all shades in this State find it easy to organize spectacular explosions of mass anger to achieve their short term ends – like demoralising opposition parties, rigging elections, etc. They lead armed groups of unemployed youths used in running various illegal rackets, and also as political cannon fodder. They make bombs, carry ‘messages’ and contraband across the international border. The police are told to keep their eyes closed , for a fee!

Again, it has been a fashion with many Bengali political leaders to preach violence openly. Their political affiliation does not matter. Their bark is every bit as toxic as their bite.

The late Harekrishna Konar had proudly hailed the frenzied left activists involved in the Sainbari massacre. Much later Anubrata Mondal , President of the TMC’s Birbhum unit, appealed to his supporters to attack the police with bombs !For dealing with dissidents not toeing the party line in elections, his solution was ‘Set their houses on fire ‘!

Days ago, supporters of opposition parties have quaked in their boots as Mr Mondal thundered, after the TMC won the 2021 Assembly polls, ‘Now a highly enjoyable dangerous new game will begin in Bengal’!

Even state Chief minister Mamata Banerjee took up the menacing ‘Khela hobey‘ slogan,. At least 50 opposition workers/ relatives were killed or driven out of Bengal, leaving their shops and property / houses .The police refused to accept FIRs from the victims from May 2, 2021.

Eventually the National Human Rights Commission (NHRC) had to step in . Of late some action has followed in a few cases of post-poll violence involving murder and rape.

Neither the late Konar nor Mr Mondal was/has been pulled up by their respective leaderships the CPI(M) and the TMC , for their public endorsement of mob violence.

Further, it has been standard practice among Bengal political parties to deal leniently even with the most hardened of criminals. The new slogan is, POLITICALLY-BACKED CRIME PAYS.

For instance in the name of releasing political workers harassed by the administration , most parties winning the polls order the immediate release of prisoners held in jails on various charges as a ‘goodwill’ gesture. In 1978, when the Left come to power, this benefit went to the notorious Sain killers involved in the Sainbari massacre of 1975, as they went scot free.

Again ,the first thing Mamata Banerjee did as a Chief Minister in 2011 was to secure the release from the lock-up of Bhowanipore thana of local rowdies the police had arrested, going to the thana herself !In other words, whether the Left ruled or non-Left parties came to power, crime paid in Bengal and the victims had better fend for themselves.

Is it any surprise that incidents of mindless mob violence recur in Bengal?

Analysing the slaughter of innocent Muslim women and children at village Bogtui, Birbhum district in West Bengal on the night of March 21, one begins to appreciate why it is more important to understand the socio-economic background to the crime: a point made by seasoned AIMIM leader Asaduddin Owaisi.

As Mr Owaisi explained, it was common knowledge that the mafia rule in Bengal run by criminal syndicates running illegal sand mining, coal smuggling and other acts of major corruption, had drawn in most political parties into such crimes. As for the Muslims of Bengal, regardless of tall made by ruling TMC leaders suggesting they were ‘safest under the TMC’s tutelage,’ the community was the poorest and most backward in India as a whole.

Significantly, Bengal-based social observer Qazi Masoom Akhtar concurs. ‘Under the TMC rule, you see Muslims fighting others, Muslims fighting Muslims and Muslims committing crimes, being arrested and thrown into jails in ever larger numbers….how does such trends and policies used by the TMC help Muslims in Bengal in any way? It keeps them ever more backward, poorer, illiterate and helpless than ever. Where is the new local Muslim leadership coming up? I do not see any signs.’ he said during a recent TV interview.

Nor should one under estimate the ubiquitous power and extent of the TMC-backed Syndicate/Mafia black money system operating in Bengal, dominating virtually every aspect of life — from getting admitted to a hospital , securing entry for a child in a local school , selling tea in the local market, or repairing one’s own house .

A study carried out by an academic working with the eminent Indian Statistical Institute (ISI) at Baranagar revealed two years ago that annually black money transactions carried out by illegal syndicates’ / local gangs involved more than Rs 34,000 crore annually !

In the process, the central and state governments not to mention the common people of Bengal have chosen to remain big time losers, while a team of well-organised criminal elements seem to be comfortably in charge of things.

The Calcutta HC‘s observation about the urgent need to restore the faith of people in the law comes not a moment too soon. (IPA Service)

Reaching $400 Billion Export Target Is Welcome But More Potential Is Still There
Posting....