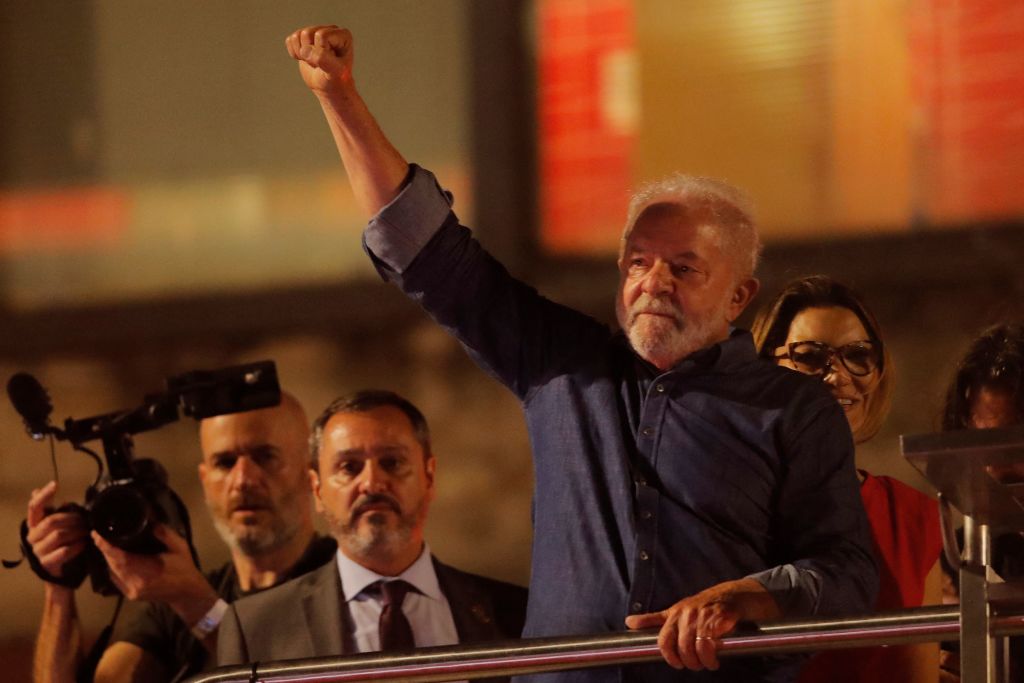 On Sunday, October 30, Brazil’s former president Luiz Inácio Lula da Silva achieved a historic victory over the incumbent Jair Bolsonaro. In the closest race since the restoration of Brazilian democracy in the 1980s, Bolsonaro became the first incumbent to ever lose reelection.

The election divided Brazil between the defense of democracy and a return to civil politics on one side, and authoritarianism and reactionary politics on the other. Lula’s victory, with 50.9 percent of the vote versus Bolsonaro’s 49.1 percent, sparked celebrations on Brazil’s largest avenues as the popular cry rang out for an end to the social crisis the country has been enduring.

Brazilian journalist Fernando Gabeira, who once fought as a guerrilla fighter against the military dictatorship, called the election “a victory for Brazil, and a victory for humanity. We can now breathe again.” Former president Fernando Henrique Cardoso, a longtime rival of Lula, sent him a message of congratulations proclaiming “democracy has won.”

Bolsonaro’s second-round vote total was slightly higher than it had been in 2018: 58.2 million compared with 57.7 four years ago. But Lula achieved a big increase on the vote for his Workers’ Party (PT) colleague Fernando Haddad, Bolsonaro’s main opponent in 2018, with support for the PT-endorsed candidate rising from 47 million votes in 2018 to 60 million votes this time.

Lula campaigned on a message of democracy and pragmatism, defending political unity, and a valorization of human and civil rights. For his vice presidential candidate, Lula picked Geraldo Alckmin, another former rival, who was his presidential opponent in 2006. Lula’s diverse coalition, encompassing figures that ranged from socialists to neoliberals, condemned Bolsonaro’s disregard for the Brazilian people, the economy, and the environment, promising a return to stability and progress in opposition to Bolsonaro’s four years of chaos.

It is the third presidential victory in Lula’s career, after two consecutive terms he served between 2002 and 2008, cementing his position as the most popular living politician in Brazil.

However, Lula’s election is a bittersweet moment, as the legislative and gubernatorial elections of the last month were in large part won by conservative or far-right candidates who backed Bolsonaro. Lula will face unprecedented hostility as president, as his political opponents will control Brazil’s Congress as well as its biggest and richest states.

In addition, Bolsonaro has repeatedly claimed in the past that the only way he could lose would be in the event of fraud. With his increasingly radicalized base willing to act violently, it remains to be seen what the coming months will mean for Brazilian democracy.

In the run-up to the election, Bolsonaro presented himself as a champion of stability and progress, claiming that Brazil was in a prosperous condition with a strong economy, in defiance of all evidence to the contrary. One of his chief campaign tools was the use of AuxilioBrasil, a social program meant to supply direct monetary transfers to low-income citizens. Initially set up as an emergency aid program during the COVID-19 pandemic, it proved to be one of the few tools Bolsonaro had to elevate his dismal approval ratings.

With this in mind, the president pushed through legislation to keep the program alive in October 2021, just in time for the start of the presidential campaign season. Bolsonaro has claimed that Auxilio Brasil was more successful than Lula’s Bolsa Familia, the former president’s historic low-income support program that helped lift tens of millions of people out of poverty in the 2000s. While the policy seemed to be at odds with Bolsonaro’s neoliberal economic stance, he used Auxilio Brasil to portray himself as a great humanitarian.

His critics, on the other hand, called it the greatest act of mass bribery in Brazil’s history. Nonetheless, it is undeniable that Bolsonaro’s emergency program, introduced after four years of economic and social disarray, for which his own administration was responsible, increased his popularity and helped keep him competitive in the polls.

For his part, Lula worked hard to present himself as the only democratic choice for Brazilians. He harkened back to his own administration as a prosperous era for the country while defending himself against a bitterly hostile opposition that showered him with accusations of kleptomania, communism, and even satanism.

While he was consistently ahead in presidential polls, Lula was not as accustomed to campaigning in the digital age as Bolsonaro, whose supporters flooded social media with his reactionary narrative. The former president, who first ran for election in the 1980s and does not even possess a cell phone today, used more traditional venues of communication. This made for a stark contrast with Bolsonaro, an active Twitter user who deployed an incredibly effective fake-news machine.

This demonization of Brazil’s democratic cornerstones stoked a dangerous mood among Bolsonaro’s followers. Polling researchers have been attacked on the streets and far-right supporters have murdered several people, including one man who was hacked to death with a machete for voicing his support for Lula. Calls to abolish the Supreme Court became commonplace among Bolsonaro voters.

The new era of disinformation and polarization has tested Brazil’s electoral safeguards to their very limits.

The month of October, culminating in yesterday’s election, was a battleground of disinformation, political extremism, and even open violence. On October 23, Roberto Jefferson, a right-wing politician with close ties to Bolsonaro, who once employed his son as an intern, was involved in a firefight with the federal police. Jefferson’s online attacks on the Supreme Court had violated the terms of his house arrest and prompted a move to take him into custody, which Bolsonaro sought to delay.

In the October presidential debates, Bolsonaro also changed tactics. Moving away from his familiar aggressive and bombastic rhetoric, Bolsonaro tried to cultivate the image of a calm and civil figure, lauding his own tenure as president while accusing Lula of attempting to besmirch his reputation. This surprising change in tactics worked well for the incumbent, placing Lula in the position of defending himself and his policies.

The reorientation was in large part the work of Bolsonaro’s de facto campaign head, his second-born son, Carlos, who has for many years been the shaper of his father’s public image. Along with his two brothers, Carlos has become a successful politician in his own right. He is an associate of Donald Trump’s ally Steve Bannon and the firm Cambridge Analytica, and he has shown himself to be a master of social media disinformation.

Jair Bolsonaro’s defeat may bring an end to his own political career. However, his sons remain active and influential, and his brand of reactionary, protofascist authoritarianism has grown stronger since his election victory in 2018.

Bolsonaro’s disregard for the democratic process is well established. He forged his political career as an apologist for Brazil’s military dictatorship and its torturers. At every step of the way, Bolsonaro attempted to block democratic measures to ensure a fair election.

Throughout 2022, he campaigned for the installation of paper ballots in place of the proven and tested voting machines, claiming that those machines would inevitably be hacked. He claimed to have evidence of irregularities (but never produced it) and called for the military to conduct its own counting of the votes.

When state governments made public transport free on election day to ensure higher turnout in the first round, Bolsonaro tried to stop them. In the second round, the federal transport police conducted traffic stops near voting areas in the Brazilian northeast, Lula’s political stronghold. This constituted a move from legal obstruction to illegal disruption.

At every step, Bolsonaro attempted to block democratic measures to ensure a fair election.

So far, Bolsonaro has remained silent about the result of the election. The danger of a violent coup has not materialized, but it is almost certain that many of Bolsonaro’s supporters will contest the outcome. It would be fully consistent with Bolsonaro’s own character and track record to refuse to acknowledge his loss.

The Supreme Court has made Lula’s victory official, proclaiming that there is “no risk of the results being threatened.” The president of the Chamber of Deputies, Bolsonaro’s ally Arthur Lira, has also publicly acknowledged the result. These pronouncements will certainly make it harder for Bolsonaro to challenge his defeat.

In the 2010s, Lula saw his party, the PT, demonized as a kleptocratic force by Sergio Moro’s biased anti-corruption investigation. Moro arrested Lula on dubious charges in 2018, just in time to prevent him from running for the presidency against Bolsonaro. The Supreme Court overturned his conviction in 2019, allowing him to return to the political fold, and he has now secured a third term, twenty years after his first presidential victory.

However, the Lula who emerged victorious yesterday is not the same figure who first became president in 2002, and the country he will govern has also changed. In order to defeat Bolsonaro, Lula moved increasingly toward the center to broaden his appeal. His vice president, Geraldo Alckmin, is an ideological opponent of the Left, along with many of his other allies. Lula’s appeal to evangelicals has also served to strengthen the place of religion in Brazilian political life.

The Congress that the new president will be presiding over is far more conservative and hostile than the one he cooperated with in the 2000s. Lula faces a number of daunting challenges, such as reversing the damage done to the Amazon, rebuilding the social and environmental agencies that Bolsonaro gutted, and combating the culture of hate and casual prejudice that his predecessor cultivated. But whatever trials might lie ahead, his victory has given democracy and civil discourse a new chance in a country that desperately needed hope. (IPA Service)

Nitish Kumar Not Campaigning In Bihar Bypolls Due To Personal Issues
Posting....