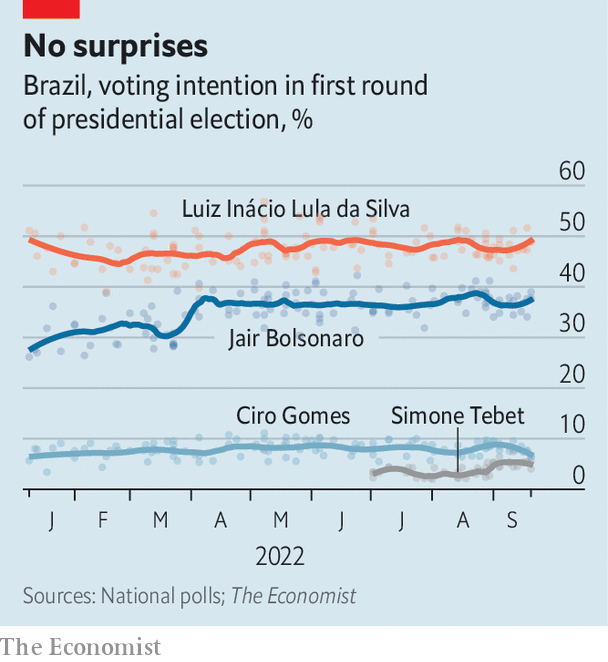 Only 72 hours before the holding of the Presidential elections in Brazil on October 2, Left coalition candidate and former president Luiz Inacio Lula da Silva, popularly known as Lula has emerged as a front runner against the far right incumbent president Jair Bolsonaro. Latest opinion polls show that Lula has a 13 point lead over Bolsonaro in the first round. Media reports are indicating that there is a last minute swing in favour of the Left wing candidate and it will not be surprising if he defeats his rival in the first round itself.

As per election rules  in Brazil, in the first round, the winning candidate  has to get  more than 50 per  cent and if  no one gets the majority figure, the runoff will be held and the candidate  who gets maximum votes, will be the winner. The run off elections in Brazil is scheduled for October 30.

The survey put support for Lula at 46 percent in the first round, compared with 33 percent for Bolsonaro – up from 44 percent for Lula and 34 percent for Bolsonaro a week earlier. In a potential October 30 run off, Lula’s lead rose to 14 per cent as against 10 per cent recorded by opinion polls a week   earlier. This   means there is a swing in favour of Lula in the last peg of the campaigning. The workers of the leftist coalition are making final efforts to reach out to the voters who are still vacillating.

Brazil remains tense in advance of the upcoming vote, as experts have raised concerns over election-related violence should Bolsonaro refuse to accept defeat.

For months since April this year, the right wing presidential candidate has been talking of his expected loss in the ‘rigged elections’ and talking of how the Brazilian people will not let the left takeover this country without a fight. He has been regularly criticizing the integrity of Brazil’s voting system and calling his supporters to be prepared for actions if he loses. This is nothing but a call for rebellion by his right wing supporters against the Brazilian Election Commission and the Constitution

Bolsonaro is continuing with all these propaganda despite the independent observers and even the United States Government agencies stating that Brazilian voting system is sound and the Election Commission is doing work in an impartial manner. Left wing supporters of Lula believe that the President is virtually seeking the help of the military in the event of his defeat in the presidential polls. All these moves of the Brazilian president have created a sort of fear psychosis among the Brazilian citizens. They are expecting bloody clashes during the polling day and after the results.

The far-right leader, who rode into office in 2019 on a wave of populist anger after Lula was jailed and his successor was impeached as part of a corruption investigation, has said he views just three possibilities for his future: “prison, being killed or victory.”If needed, Bolsonaro said, he and his supporters would go to war. Bolsonaro is a former army officer and he favours military dictatorships. So the political observers in Brazil are worried at the future of Brazil after the elections.

Bolsonaro’s decision to hold a parallel campaign event on September 7on the occasion of 200th Independence Day of Brazil at Copacabana beach blurred the lines between government and politics, leaving the strong impression that the military pageantry — paratroopers gliding onto the beach, cannon fire from a nearby fort and flyovers set to the “Top Gun” soundtrack — were all in support of Bolsonaro. Indeed, some people participating in the events wore Bolsonaro campaign gear.

Lula has sought to widen his political coalition ahead of the October polls, naming centrist Geraldo Alckmin as his running mate. This is aimed to draw the centrists around him in the first round of the presidential elections itself. The centrists are still divided as many of them think that Lula, if elected president, will resort to curbs on democratic rights on the lines of Venezuela president Maduro. But in his campaign, Lula and the left coalition members including the Brazilian Communist Party are rebutting by saying that the new Lula presidency will protect all democratic rights and raise the standard of living of the common people. (IPA Service)

Remembering The Teachings Of Mahatma Gandhi On His Birthday On October 2
Posting....