Labour Market Recovery In 2022 Will Be Slower 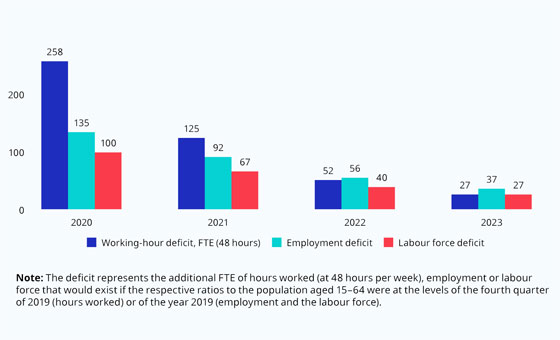 Economic outlook for all the countries across the world in 2022 remains fragile due to a range of issues including rising COVID-19 caseloads, higher inflation, and Russian aggression on Ukraine. Economic recovery has been assessed to be slower than the projected earlier, which will make labour market recovery even slower. Fostering a people-centred recovery has therefore become all the more urgent.

This is the gist of what the International Labour Organisation (ILO) has conveyed to the Spring Meetings of the International Monetary Fund (IMF) and the World Bank. The statement has great relevance not only for the world but also for India, since the country is presently reeling under great economic distress with vanishing employment, and high level of unemployment rate. Labour participation rate in March in the country declined to 36.5 per cent, while the unemployment rate hovering around 8 per cent.

The ILO Director-General Guy Ryder has said that global unemployment is expected to remain above pre-COVID19 level until at least 2023, labour market recovery will be slower, and particularly worrisome are the deepening inequalities within and among countries, and the damage done is “likely to require years to repair, with potential long-term consequences for labour force participation, household incomes, and social cohesion.”

IMF has not only served this warning but also called for urgent action to create decent work in green, care, and digital economies to contribute to a just transition to carbon neutral economies and to prevent inequalities from becoming entrenched. IMF believes that implementing the UN Secretary-General’s Global Accelerator on Jobs and Social Protection for a Just transition could create at least 400 million jobs by 2030, primarily in the care and green economies, and would extend social protection floors to over 4 billion people currently not covered.

Ryder has used the term “people-centred recovery” as against the “profit-centred recovery” is especially noteworthy because the world is obsessed with the GDP growth rate in such a way as if we are suffering from some “obsessive compulsive disorder” and refuse to see beyond the GDP to look at human sufferings, poor wages, and no social security coverage to over 4 billion people, over half of the global populations. In case of India about 76 per cent of the workforce is not covered at all under any of the social security provisions, and only 24 per cent have at least one of the social security though insufficient to cater to their needs. The Centre is clearly adopting a path that goes in the opposite direction of the “people-centred recovery” and hence the IMF statement has a message which India must not fail to read.

India is also going to implement the four controversial labour codes soon, perhaps from July. The Codes are labelled as anti-worker and pro-corporate by the Central Trade Unions, barring the Bharatiya Mazdoor Sangh (BMS) supporting the ruling BJP and getting support in turn. Modi government has made conflicting claims regarding the codes, at one time telling the country that these are intended for creating an “ease of doing business” and at another time says it “pro-worker”, though the codes giving power to business and industry to hire and fire more easily and little social security for workers, especially in the informal sector. Modi government is batting for the gig economy, but not making provisions for quality jobs for all with social security provisions. India is thus moving fast towards anything but “people-centred recovery”.

Ryder has said that a transformative package of care policies, based on universal access, could generate close to 300 million jobs, create a pathway for building a better and more gender equal world of work, and ensure that no-one is left behind in the transition to net zero economies. Let us hope that IMF and World Bank would come out with such policies so that everybody can get benefited. However, when we look and India, the care policies here are presently disheartening. The care sector is itself ill, which need more care, that the boastful statements of the Modi government. The total health expenditure of the central and state government even in the pandemic year 2021-22 was only 2.1 per cent of the GDP. If India needs to create any considerable number of jobs in the care sector it would need huge investment. Since the health sector budget for 2022-23 is merely Rs 86,200.65 crore, it indicates that Modi government has no idea that it can create huge number of employment in the care sector.

Even before the Russian aggression against Ukraine there were 52 million full-time jobs loss relative to the fourth quarter of 2019. Situation in 2021 was improved, but the figures remained 2 per cent below the pre-pandemic level. (ILO will come out with new labour data in May.) The war is worsening the economic outlook, creating “a triple crisis – in finance, fuel and food – that will increase poverty and hunger and lead to substantially worse outcomes in the world of work,” DG-ILO said. Monetary and fiscal policy will tighten at a faster rate in effort to curb inflation while economic recovery still requires support to be sustainable.

India should also take not of the IMF statement that says achieving a human-centred recovery will require a careful coordination and balancing of macroeconomic policies, investing in people while reigning inflation. Support also remains essential for gender equality, protection of workers by guaranteeing fundamental rights at work, health and safety at work, and universal social protection. (IPA Service)

Congress Is Facing A Do Or Die Battle In Coming Gujarat Assembly Elections
Posting....