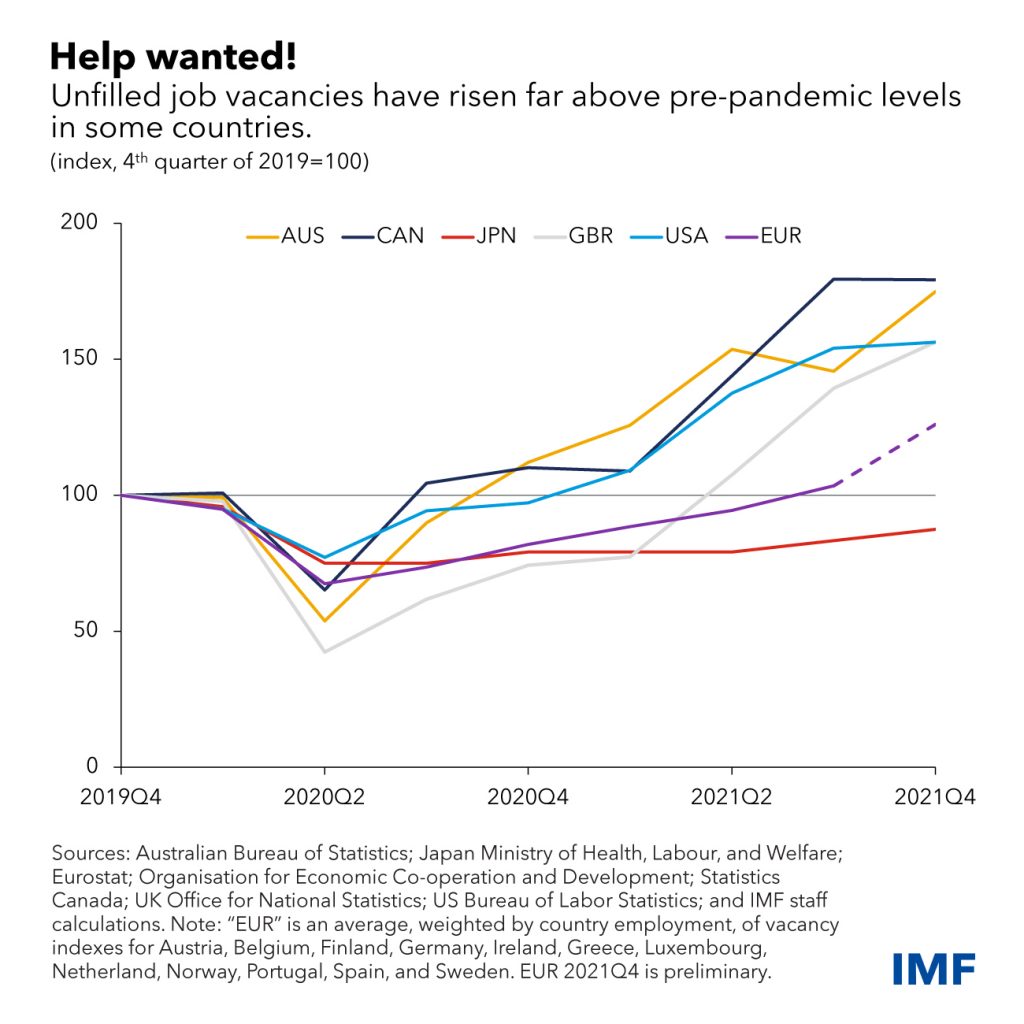 The number of hours worked in the world fell in the first quarter of 2022 and remained 3.8 per cent below the level of the fourth quarter of 2019 – and that is equivalent to the loss of 112 million full-time jobs. The latest ILO estimate has maintained that this represented a significant setback in the global labour market recovery process with the warning that the heightened turbulence and monetary policy tightening is likely to have a broader impact in months to come. “There is a growing risk of a further deterioration in labour markets over the course of 2022,” the ILO Director-General has said.

Furthermore, great divergences in employment and labour income persist. By the end of 2021, employment had returned to pre-crisis levels or even exceeded them in the majority of high-income countries, while deficits persisted in most middle-income economies. In 2021, three out of five workers lived in countries where labour incomes had not yet recovered to their pre-crisis level.

Global inflation, mainly driven by increases in food and energy prices and supply disruptions, adds further risks to the recovery and an erosion of real incomes for workers and their families. In the absence of commensurate wage increases, aggregate demand could fall significantly, and in so doing threaten economic growth and employment. DG ILO while addressing 8th BRICS Labour and Employment Ministerial meeting has served this warning at a time when multiple global crises are unfolding in the world.

Increasing inequalities between and within countries is hampering our efforts more than ever before to make labour market more inclusive, sustainable and resilient. It is an issue to be addressed urgently in the backdrop of the climate change. Additionally, the last two and half years of the pandemic has underlined the importance of green recovery for which green employment is being promoted as a key for addressing climate change and accelerating green, low-carbon sustainable development. True, promoting green employment has very high potential for the creation of quality employment, however, it could be realized only if the right policies are adopted.

There are also several other issues related to green employment including ensuring a just transition for the workers who will be affected in the process. Large investment would be required in developing the skills that would enable them to harness the opportunities of the green transition. “Working together towards a better measurement and statistical definition of green jobs will support the attainment of these objective,” the DG-ILO has said. “Investing in skills development for a resilient recovery and to make workers future ready in the face of digitalization, demographic shifts and decarbonisation is equally imperative.”

The pandemic has underlined the need for protection for workers which is paramount for an inclusive and human-centred future of work. If the world is going to promote green employment, the workers in this new form of employment must also be supported by providing adequate social protection, actively promoting appropriate regulation, and improving public services for those workers to decent work for all in rapidly changing circumstances.

The ILO Monitor on the World of Work says that conflict in Ukraine has hit the global economy by increasing inflation, especially in food and energy prices. It has disrupted the global supply chain, and heightened financial turbulence. Monetary policy tightening is likely to have a broader impact on labour markets around the world in months to come. There is a growing but uncertain risks of a further deterioration in hours worked over 2022.

The gender gap in hours worked remains large, it pointed out, despite positive developments in high-income countries. Women globally now spend 18.9 hours weekly in employment while men spend on an average 33.4 hours. The gap was already considerable in pre-COVID-19 era which further widened during the crisis. Informal jobs suffered twice the impact registered in formal employment, and the informal women workers have been hit harder than males.

There is a great divergence in employment and labour income. The overall global data that says that global labour income has surpassed its pre-crisis level by 0.9 per cent actually conceals the considerable disparities, since it included the high-income countries where employment had returned to pre-crisis levels or even exceeded in majority of them by the end of 2021. Employment deficit persisted in most of the middle income countries, and it must be kept in mind that three out of five workers lived in these countries.

Though in advanced countries, the sharp increase in job vacancies was witnessed at the end of 2021 and in the beginning of 2022, there is no strong evidence that labour markets are generally overheated, as the pool of unemployed and underutilize labour continues to be considerable in most of the countries (mostly advanced) analysed. Furthermore, developing economies continue to suffer significant labour market slack.

Global inflation, mainly driven by increases in food and energy prices and supply disruptions, adds further risks to the recovery and an erosion of real incomes for workers and their families. In the absence of commensurate wage increases, aggregate demand could fall significantly, thereby threatening economic growth and employment, ILO monitory has said. Based on countries with available data, real wages grew in 2020–21 by 1.6 per cent in the median country, which is 0.7 percentage points below the median growth in 2019. Despite tighter labour markets, therefore, the overall risk of a wage-price spiral currently remains low.

In this scenario, there is no way out but to listen to the ILO’s call to “Action for a Human-Centred Recovery” that was adopted in June 2021. It would also require a comprehensive approach and international coordination as exemplified in the UN Secretary-General’s initiative, the Global Accelerator for jobs and Social Protection for just transition.

Timely and effective support to maintain purchasing power of labour income is imperative, along with careful readjustment of macroeconomic policy stance, and realtime monitoring of the labour market condition. (IPA Service)

Aamir Khan Is Being Haunted By Trolls For His Film ‘Lal Singh Chadda’
Posting....