Labour In Informal Sector Is In Pathetic Economic Condition In India 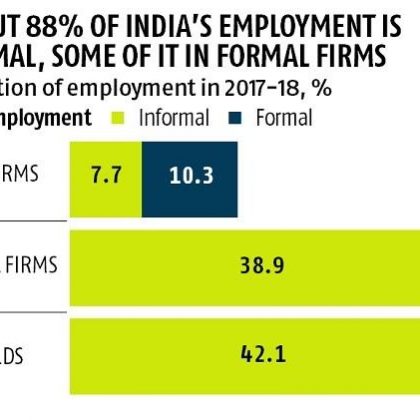 Covid was a reality all over the world in the years of 2020-2021.The epidemic was not alone, it was followed by devastation. The victim countries were dragged down from the development level they had been. India was no exception. But for other countries, their agenda never allowed any compromise with progress and hence, they arrived soon where they were. India was one country that remained unconcerned about the key indicators. Result was reflected in no uncertain terms in the ranking for the United Nations’ development index or HDI.

The lag is the crude reality today with people dying at much younger age. The factors that lead to this gloom are all thrown into one basket making Covid responsible for all the suffering. Till 2019, the average age in the country was 67.2 years but now, to be alive even after the average of 67.2 years is a boon.  In education too we lag behind, registering poor schooling and the resultant damage for the young ones. In the 11.9 years of schooling in the country, today in reality, it is available for hardly 6.7 years.

At the root of the tragedy is the unprecedented shrinking of income. The Gross National Income per capita level has slipped down to 6,590 dollar, labelling India as a lower middle-income country.  Jobs are like catching moon in your palm, that you would never wish to let go, at any cost, even life. Long hours of slogging, in extremely unhealthy conditions, and then at the end, promises drown in falsehood and you get underpaid. Still you continue putting at stake your conscience, your rights, and continue toiling at your peril.

It is here that country’s progress gets locked. Any kind of welfare steps are denied to those who produce the wealth, on which the life of a nation is kept flowing. It is in other words, demographic dividend. The report has come out pointing at the pitfalls in the handling of the employment scenario and the resultant suffering of our working class. It is the failure of the system that forces people from the lower depths to shoulder the responsibility of development and progress, and yet they are themselves kept with bottom level affordability. According to the report, a reduction has been registered in their Human Development Index value in 2020-2021, reversing much of the progress. It is the Sustainable Development Goals that are facing the brunt.

In the grim scenario, it is the MSME that has kept offering respite to the common masses. Compared to other sectors, availability of employment is greater here, whatever be the wages and the timings. But the skeletons started rolling out when emergency credit line guarantee scheme was introduced. The credit to MSMEs was for a maximum of 20 per cent of their outstanding debt. As per data, when the loans have been disbursed under this scheme to one crore accounts, 16.4 per cent of these accounts have turned non-performing due to financial stress the borrowers were going through. It was clear that Covid was not the only factor to keep economy suffering. It continued even after Covid days were over.

The data from the National Credit Guarantee Trustee Company reveals that 16.22 lakh loans have turned bad. In value terms, this works out to Rs 11,893 crore. This implies that it was the relatively smaller firms that have been under stress and have not been able to meet their obligations. The fact that in the first tranche itself of the scheme, most of the loans turned bad was a signal that it was only a tip of an iceberg, more tragedies were yet to roll out. MSMEs, both formal and informal, give jobs to the major section of labour force, and it is mostly this section that is victim of continuing financial stress.

While these numbers do reflect the extent of financial stress among the MSMEs, it is also relevant to point out that these are formal MSMEs. Formal sources are applicable only for them. Informal MSMEs are much larger in numbers and financial crisis is greater for them, since they are denied any access to formal sources.  With no access to credit and formal funding, their plight is much worse. Labour force getting visibly affected, their continuing financial stress points to the simmering distress in the labour market. (IPA Service)