Kharge takes over from Sonia as new Cong chief 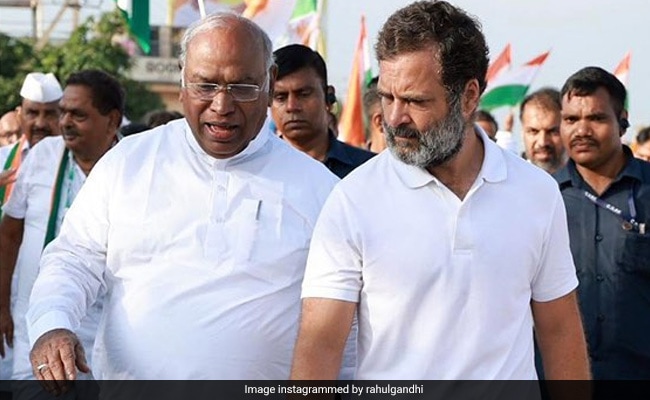 Elections in two states within this year, challenges to the two remaining Congress governments next year, and then the 2024 fight to stop another Modi sweep — Mallikarjun Kharge got more than just a certificate from the party as he formally became Congress president today. “Today I remember all the past party chiefs as I seek every party worker’s support, in full strength, to take on the challenges before the Congress,” he said after taking over.

The 80-year-old Karnataka veteran, who defeated Shashi Tharoor, 66, in a rather eventful election only last week, replaced Sonia Gandhi as he got the victory certificate from Madhusudan Mistry, the party poll panel chief. “It was on January 15, 1998, in Bengaluru when Sonia Gandhi at her first public rally said she’s taking her first political lessons from Karnataka. Her politics has been that of sacrifice, above self-interest and quest for power alone,” he said.

Mallikarjun Kharge is the first Congress chief from outside the Gandhi family in 24 years, but Rahul Gandhi, who was at the function, remains the face of the party nonetheless — a reason why Kharge faces the “rubberstamp” charge.

Kharge has billed “consensus and consultation” as his leadership strategy. He met with former prime minister Manmohan Singh at his home yesterday. This morning, he paid homage to Mahatma Gandhi at his memorial, Rajghat.

He also visited memorials of former PMs Jawaharlal Nehru, Lal Bahadur Shastri, Indira Gandhi and Rajiv Gandhi, besides former deputy PM Jagjivan Ram, who was the first Dalit chief of the Congress;  Kharge is the second.

In just over two weeks, the Congress will hope the voters of Himachal Pradesh continue with their pendulum pattern to bring it back to power after five years of BJP rule. The hill state votes on November 12.

Another election in the same timeframe — exact dates awaited — is in Gujarat, PM Narendra Modi’s home state, where the Congress has been running an admittedly lowkey campaign as its hopes of unseating the BJP aren’t visibly high.

In 2023, a bigger test awaits Kharge. The year will see nine assembly elections, including in Rajasthan and Chhattisgarh, the only two states where the Congress has chief ministers.

The year 2023 will also see the culmination of Rahul Gandhi’s five-month ‘Bharat Jodo Yatra’, the Kanyakumari-to-Kashmir march that the party hopes will help it stop the BJP from another sweep, in the 2024 general elections.

As Prime Minister, Rishi Sunak Won’t Change The Course For The Tories
Posting....