Kharge As Dalit President Can Improve Congress Tally In Gujarat 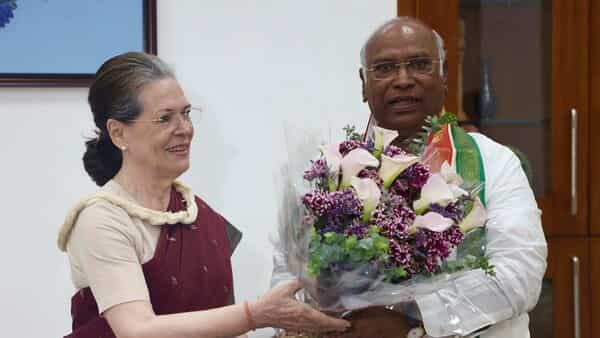 Veteran leader Mallikarjun Kharge becoming the third Dalit president of the Indian National Congress, after D Sanjivaiah (1962) and Jagjivan Ram (December 1969), is expected to have a big impact on Gujarat assembly polls. In the western state and home-turf of Prime Minister Narendra Modi, Congress has been making strong attempts to woo the Dalit community that accounts for about eight per cent of the state population. Apart from 13 seats (out of the total 182 in the state) reserved for the Scheduled Castes, Dalit voters can also tilt the scales in a few dozen other seats. However, the Dalit population is smaller than some other communities, and is further subdivided into three sub-castes; namely, Vankar, Rohit and Valimki. The BJP, which has been in power for 27 years, is trying to attract the Vankars, the highest in the hierarchy. In all the elections, Dalits have supported both the BJP and the Congress in more or less equal proportions. The BJP has also taken many initiatives to attract Dalits. Being in power, Dalit leaders were given important positions in different bodies. The Congress aims to increase the Dalit voter turnout, especially in the unreserved seats where the community accounts for 10 per cent or more of the population. On the other hand, AAP is hoping that its ‘guarantees’ like 300 units of free electricity per month, unemployment dole and Rs 1,000 allowance for women will attract the Dalits, besides other communities. The BJP has won the majority of the 13 seats reserved for the Scheduled Castes since 1995. In 2007 and 2012, it won 11 and 10 of these seats, respectively, while the Congress had won two and three seats. But in 2017, the BJP faltered and managed to win only seven seats, while the Congress won five. One seat was taken over by an independent backed by the Congress.

After the death of Netaji Mulayam Singh Yadav, Samajwadi Party chief Akhilesh Yadav and PSPL chief Shivpal Yadav seem to project great unity once again. However, whether this fraternity is real, or simply a matter of political image, is a big question. Shivpal Yadav has given a clue for his nephew Akhilesh Yadav saying that he wants to take everyone along now and follow the direction shown to them by his late elder brother,Mulayam Singh Yadav. Shivpal said that he saw a reflection of Netaji in Akhilesh. Akhilesh Yadav now faces the challenge of keeping the party as well as the family together and ensuring that his elders, Shivpal included, do not turn unfriendly. Whither the ties between Shivpal and Akhilesh, will have a powerful impact on the politics of Uttar Pradesh. The results of 2024 Lok Sabha elections might turn out to be in favour of the Samajwadi Party.

Political strategist Prashant Kishor, who has begun his own padyatra in Bihar, has reportedly claimed that Bihar chief minister Nitish Kumar is in communication with the BJP through JD(U) MP and Rajya Sabha Deputy Chairman Harivansh, and if the need arises, he might renew his alliance with the saffron camp. The JD(U) dismissed the claims as misleading and aimed at spreading confusion. While Prashant asserted that this is the reason why Harivansh has not yet been asked to resign from his Rajya Sabha post, even as the JD(U) has severed ties with the BJP. However, JD(U) spokesperson KC Tyagi rubbished Kishor’s claims, saying that the Bihar chief minister has publicly announced that he would never again in his life join hands with the BJP, and thus, there’s no room left for any doubt.

CONGRESS TO INAUGURATE NEW OFFICE AT 9A KOTLA ROAD

The Congress party will inaugurate its new office in 9A Kotla Road in Delhi on the occasion of India’s former Prime Minister, the late Indira Gandhi’s 105th birth anniversary. According to sources inside the Congress, the new party office which has been under construction at Kotla Road for the last few years, will likely be ready to move into by November 19 of this year. The new office will also have the offices of the Youth Congress, Seva Dal and National Student Union of India (NSUI). The premises built at 9A Kotla Road has two entries. One from its front gate located in Deendayal Upadhyaya Marg and second one from its back gate at Kotla Road. The party will make use of the back gate as its main entrance at Kotla Road and will not mention or use the name Deendayal Upadhyay Marg in its address.

Ahead of next year panchayat polls and 2024 Lok Sabha elections, BJP national chief J P Nadda made a statement regarding the formation of a core committee for the party’s West Bengal unit. State BJP chief and MP Sukanta Majumdar, the leader of the Opposition Suvendu Adhikari, and the national vice-president, Dilip Ghosh — the three most prominent leaders of Bengal BJP, have been named on the list. The core committee comprises 20 members, namely Nisith Pramanik, Shantanu Thakur, Swapan Dasgupta, Mithun Chakraborty, Manoj Tikka, Anirban Ganguly, Satish Dhond, Dipak Barman, and Locket Chatterjee. National in-charge Sunil Bansal; the party’s minder for the state, Mangal Pandey, and his deputies Amit Malviya and Asha Lakra will be special invitee members of the committee. The new inductions indicate that BJP wants to direct its objective on areas where the party made dents in the 2019 Lok Sabha polls, including north Bengal, the Bankura-Purulia-Midnapore zone, Hooghly and Birbhum, the Matua belt in North 24 Parganas and Nadia.

In a hitch to the BJP, the Congress showcased and dominated the results of the elections to the posts of panchayat samiti chairpersons and deputy chairpersons in Maharashtra’s Nagpur district. The Congress won 9 out of 13 posts of chairperson and eight out of 13 posts of deputy chairperson in the district. The Nationalist Congress Party (NCP) secured three posts of chairperson, while the Shiv Sena managed to win one such post. Nagpur is the home field of Maharashtra BJP chief Chandrashekhar Bawankule, Deputy Chief Minister Devendra Fadnavis and Union Minister Nitin Gadkari. (IPA Service)

Both Centre And The State Governments Have Failed India’s Hungry Children
Posting....