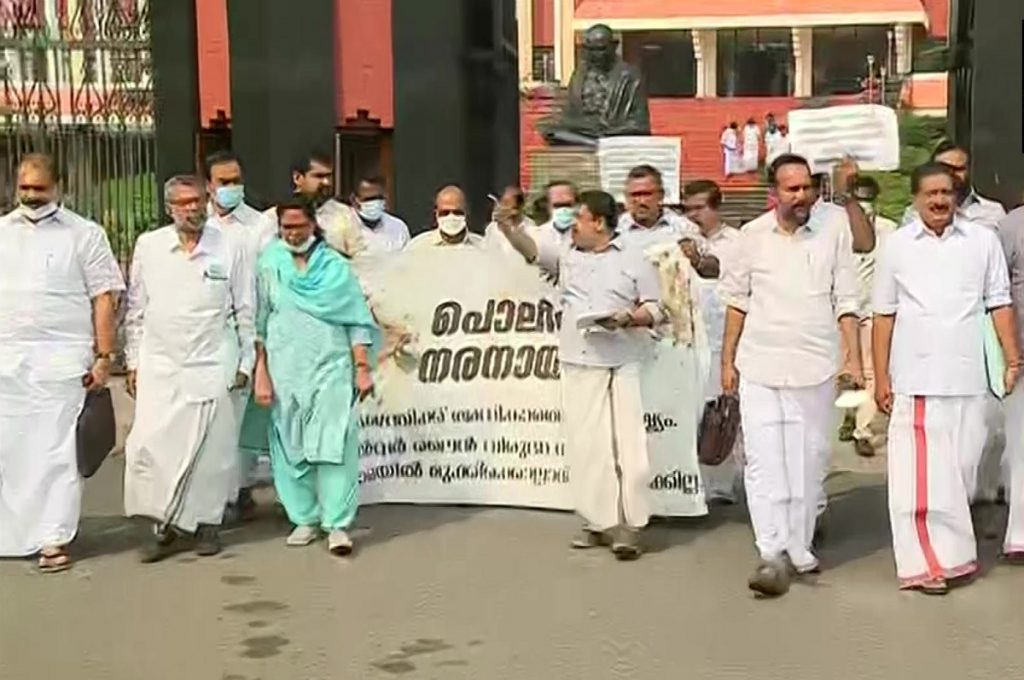 THIRUVANANTHAPURAM: Clouds of confrontation have thickened over Kerala’s political sky with the Opposition deciding to intensify the agitation against the SilverLine project and the Government equally determined to go ahead with the project.

An unfazed Chief Minister Pinarayi Vijayan has signalled his government’s intent to go ahead with the project despite the stir against it gathering momentum at some places.  The project will be implemented at any cost. But the Government will, however, reach out to the people and explain about the project. Once they understand our stand, the people, the CM said, will give their nod for the project and ignore the ‘unreasonable protests’. Pinarayi said he was confident people will reject narrow-minded politics and side with the government’s positive outlook on development.  The Chief Minister also empathised with the people who will be evicted from their land.

The Government will give them ‘heavy compensation’ so that they do not feel  bad about the loss of land, he said adding that at many places people will get four times the market price as compensation for their land.  The CM also scoffed at the argument of the opposition that the project should not be implemented now. If not now, when? That was the question posed by the Chief Minister who said the project is not for the people of this generation. It is for the future generations of the state, he averred. The Chief Minister’s firm resolve has to be seen against the opposition’s decision to cash in on what it thinks is ‘people’s anger’ against the project.

The Chief Minister has the firm support of the party in this regard. That much is clear from CPI(M) state secretary Kodiyeri Balakrishnan’s statement that the protest is politically motivated. Kodiyeri also said the opposition seemed to be aiming at launching a second liberation struggle. In support of his argument, Kodiyeri said the agitation at Madappally saw the coming together of a Union Minister and a community leader. In the name of protesting against SilverLine, a broad coalition of anti-left forces is emerging, Kodiyeri said, adding that the effort would not succeed as times have changed greatly from the time when the 1959 liberation struggle was launched, resulting in the exit of the EMS Government. That struggle was centered around Changanassery, which is the headquarters of the Nair Service Society (NSS). The recent protests too are centered around Madappally near Changanassery. The people will see through the nefarious designs of the combined opposition and frustrate their attempts to scuttle development of the State, he added.

As for the Congress-led United Democratic Front (UDF), the protests have come as a god-send. The party sees in the agitation a potent weapon not only to unsettle the LDF Government but also a chance to regain the front’s lost space in the wake of the crushing assembly election defeat. And the Opposition is targeting the Chief Minister as it believes that he is the master brain behind the semi high-speed railway project. The Opposition, it may be mentioned, had failed to gain politically from its earlier agitations against the gold smuggling case and the PSC job aspirants’ protest during the Pinarayi Government’s first tenure.

The belligerent mood of the opposition is clear from the tough statement of leader of the opposition, V D Satheesan that the survey stones  that were laid in connection with the project would be removed. “We would uproot the stones and go to jail,” thundered Satheesan.  On his part, Kerala Pradesh Congress Committee (KPCC) president K Sudhakaran has asked the CM to drop the SilverLine project and come up with an alternative flight service called “Fly in Kerala”.  That would ensure the economic and environmental wellbeing of the state, he contended.  It is evident from the aggressive stand of the Congress that the Opposition is bent upon upping the ante in the days ahead sending the political mercury soaring further.

However, the Government has to be careful about handling the protests. The police have been accused of high-handedness and excesses in dealing with the agitators. The manner in which women and even children are being assaulted has come in for strong criticism from various quarters. Taking note of the strong protests the Director of General of Police (DGP) has told the police force to exercise restraint and honour human rights while dealing with the agitation.

Meanwhile, a group of socially conscious women have written a letter to the Chief Minister voicing their anger against the violent suppression of protests against K-Rail.  The letter, signed by more than 70 women drew the government’s attention to the forcible removal of women protesting against the project.  What happened at Madappally was shocking, they said, adding that this certainly was no way to deal with a public protest  by a democratically elected government.  They also requested the Government to have a discussion with people and listen to the views of the people affected by the project.

On his part, the K-Rail Managing Director V Ajit Kumar said the work of SilverLine has been progressing with the concurrence of the Union Government. The MD claimed in-principle approval from the Centre. The Union Finance Minister, he said, had given the go-ahead with land acquisition for the project. The Centre has also said that all projects in the national rail plan will be implemented before 2030.  He reiterated that the ongoing process of laying K-Rail survey stoners is for demarcating land for social impact assessment only. The final alignment, he said, will be decided only after the Social Impact Assessment (SIA).

Meanwhile, eminent ecologist Madhav Gadgil has deplored the use of force against the agitators. Gadgil, who chaired the Western Ghats Ecology Experts panel, said people are sovereign and their views must be respected. “Democracy is our strength and decentralization Kerala’s proud heritage. We should reinstate the spirit of the People’s Plan campaign of 1995-96,” he opined. (IPA Service)