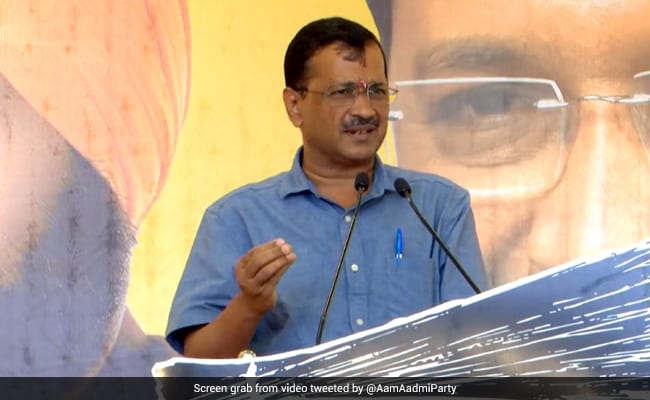 Delhi Chief Minister and Aam Aadmi Party (AAP) leader Arvind Kejriwal today said a “storm of change” is sweeping over Gujarat and his party will form the next government. Addressing a rally in Bhavnagar, Kejriwal said people in Gujarat are tired after 27 years of BJP rule and are eager to vote AAP.

Kejriwal is currently on a two-day visit to the state where assembly elections are scheduled to be held later this year.

Citing a purported report from the Intelligence Bureau (IB), the Delhi Chief Minister said: “I have brought good news for you. According to an IB report, AAP will be forming the next government in Gujarat. It is being predicted that it will be a close fight, with AAP winning around 92-93 seats, but we should get about 150 seats.”

He further said that voting for Congress will be a complete waste as the party is likely to win barely ten seats and even those MLAs will switch to BJP. Speaking in Gujarati, he said: “Now you don’t need to worry, your brother is here.”

Taking a dig at Prime Minister Narendra Modi, the AAP leader said that in Vadodara, he had seen some children raise slogans in favour of Modi. “When I asked them why were they raising slogans, they said they got paid for it, but would vote for AAP,” he said.

Kejriwal, AAP’s National Convenor, said withdrawing all false cases against agitating government employees in the state by December 31, 2022, is the first item on the AAP agenda, should the party come to power.

Building 20,000 neighbourhood clinics, depositing Rs 1,000 monthly in the bank account of every woman above 18 years, providing free medical care to 6.5 crore Gujaratis, creating ten lakh new jobs, supplying free electricity to homes and guaranteeing minimum support price to farmers for five crops are among AAP’s other promises to voters in the BJP-ruled state.

Claiming that corruption is rampant in the state, Kejriwal said Gujarat has an annual budget of Rs 2.5 lakh crore. “Yet, tell me how much of those funds have reached you? Where have all the money gone? Did you see any school, college or hospital built in your area?”

Citing the example of AAP’s Punjab Chief Minister Bhagwant Mann, who had put a corrupt minister behind bars, Kejriwal said if AAP is voted to power in Gujarat, it will retract all the black money from the corrupt and ensure that the state has a corruption-free government where people don’t have to pay bribes to get work done.

He said the BJP often talks about a “double engine government”, but what Gujarat needs is a “new engine”.

The AAP leader said the BJP boasts of a Rs 30,000 crore package for Gujarat from the central government. “I do not have Rs 30,000 crore to offer, but if we come to power, we will ensure benefits worth Rs 30,000 for all by way of welfare schemes.”

Drone with ‘consignment’ shot down along Pak border
Posting....