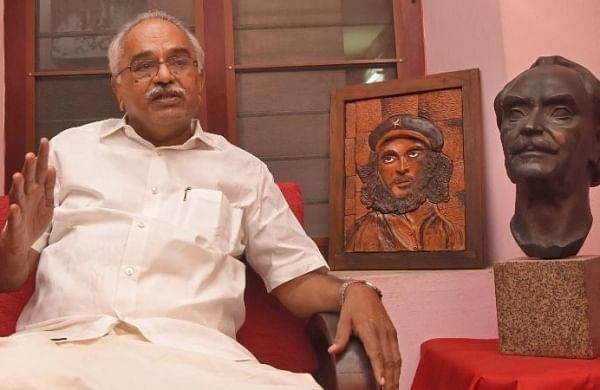 Will Kanam Rajendran get a third term as the state secretary of the Communist Party of India (CPI)?  That is the question doing the rounds in political corridors of Kerala.

The four-day CPI State conference is being held in Thiruvananthapuram from September 30. CPI general secretary D Raja will inaugurate the delegates’ session at Tagore Theatre in the Kerala capital on Friday, September 30. As many as 563 delegates will attend the conference which will conclude on October 3 when a new State Council and Secretary will be elected.

A seminar on “Federalism and Centre-State relations” will be held on Saturday. The seminar will be attended by Kerala Chief Minister Pinarayi Vijayan and his Tamil Nadu counterpart M K Stalin. Eminent environmentalist Vandana Shiva  will inaugurate a seminar on “Gandhiji and Today’s India” at Ayyankali Hall on Sunday. Senior CPI leader Pannian Ravindran will  hoist the flag at Putharikandam at 4 p.m. on Friday. A public meeting to be held subsequently will be addressed by State secretary Kanam Rajendran. The meeting will be presided over by minister G R Anil. Pannian Ravindran, central secretariat member Binoy Viswam central executive member K E Ismail, ministers K Rajan, P. Prasad, J Chinchurani and   Deputy Speaker Chittayam Gopakumar is also expected to speak on the occasion.

Kanam, who addressed the press, did not rule out the possibility of his getting a third term as secretary. As per the Party norms, the state secretary can have up to three terms. Rajendran also rejected speculation about factionalism in the party. The party is not concerned or worried about possible elections in the State conference. The CPI, Kanam asserted, has always favoured inner-party democracy. True, certain district conferences witnessed contests. That does not mean there is factionalism in the party, said Kanam. “The CPI stands as one group. Rest is media speculation,” he opined.

At the same time, a few complaints received from delegates who attended district conferences will come up for discussion at the conference, admitted Kanam. The State secretary also claimed that the party was able to ensure 15 per cent representation for women in all committees.

The conference may also see a lively discussion on the age cap of 75 years for leaders in the State Council and Executive members. Reports have it that the proposal came in for criticism at the State Council meeting held the other day. If implemented, the proposal will see the exit of senior leaders like K E Ismail and C Divakaran from the official bodies.  A section in the party holds the view that the age criterion goes against the party’s constitution, which is silent on any such criterion.

Be that as it may, there are indications that Kanam is all set to secure a third term as the state secretary. Reports say there is a lot going for Kanam, whose term as the party secretary saw the CPI growing from strength to strength.  The party has been able to increase its membership from 1.2 lakh in 2016 to 1.77 lakh now. As many as 57,000 new members have joined the party since Kanam took over as state secretary. This includes members from other parties, including the CPI(M). The party branches have gone up from 8,500 to 11,500.  There is another section which believes that though the party’s mass base has increased, its growth has not been what it should have been.  This being the ground reality, the urgent task before the new leadership will be the strengthening of the party organisation. The party needs to, among other things, set up units at booth level and in panchayat wards. No less important is the need to expand its base in north Kerala.

The political resolution to be adopted at the conference is likely to lay accent on the paramount need for opposition unity to counter the BJP at the national level. The conference will, in all probability, see the reiteration of the “Chandrappan Line” on the issue. Late state secretary of the party C K Chandrappan favoured understanding with all democratic and like-minded opposition parties including the Congress to achieve the goal of unseating the BJP from power at the Centre. (IPA Service)