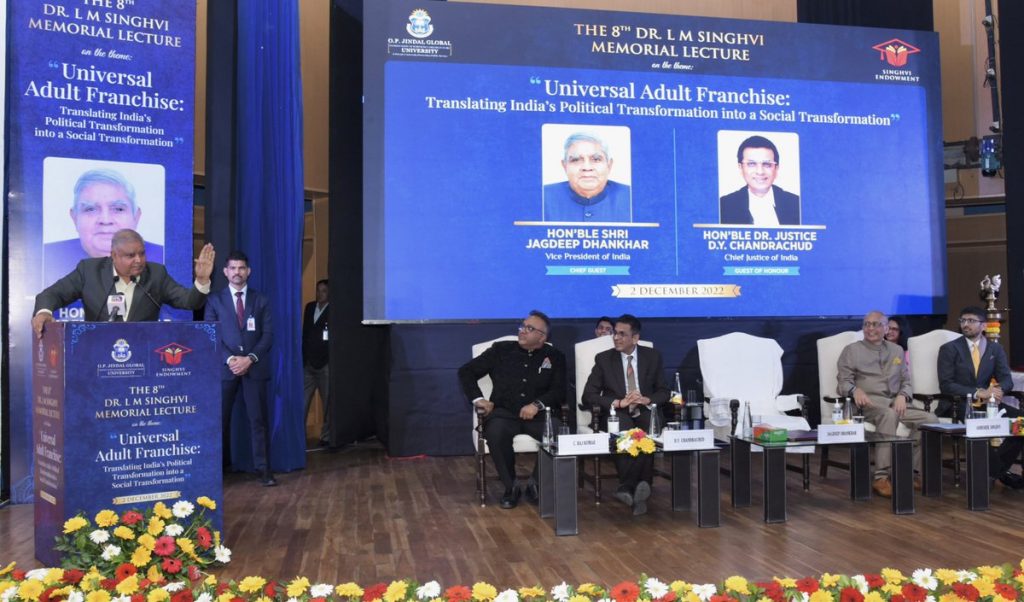 A person like Jagdeep Dhankar, holding the coveted office of the Vice President of India, launching vitriolic against the Supreme Court on the issue of appointment of judges, even while the Law Minister Kiren Rijiju in all sincerity has already been carrying on the mission to insinuate the Supreme Court, has given rise to certain apprehensions about the actual intentions of the Narendra Modi government.

It is an open secret that the person Dhankar owes his unwavering loyalty to Narendra Modi. This got clearly manifested through his actions and utterances as the Governor of West Bengal. During his tenure he did everything, resorted to all sorts of intrigues to destabilise the Mamata Banerjee government. He has turned the Raj Bhavan into the BJP office. Though his efforts failed to eclipse the popularity of Mamata, the Modi government took care of his performance and promoted him as VP.

His adopting tough posture against Supreme Court, that too while presiding over Rajya Sabha for the first time as Chairman on the opening day of the winter session of Parliament has made it explicit that Modi government is not willing to allow the Supreme Court, especially the Chief Justice of India, Justice Y V Chandrachud to have his   final  say.

Dhankar using the opening day of the session to caution the Supreme Court implies that more vociferous and scathing attacks are awaiting to be launched. Had it not been the case the Modi government would have allowed more time to Rijiju to carry out his tirade. Entrusting Dhankar with the task also sends a message that the rulers are not satisfied with his performance. The government envisages that a  far  more assault    against judiciary.

In his remark on the floor of the Rajya Sabha Dhankhar lamented that the Supreme Court had struck down the National Judicial Appointments Commission (NJAC) Act. Going a step forward he called it a “glaring instance” of “severe compromise” of parliamentary sovereignty and disregard of the “mandate of the people”. He even told the house; “parliament, being the custodian of the “ordainment of the people”, was duty-bound to “address the issue” and expressed confidence that “it will do so”. What does it imply?  He obviously tried to caution the Supreme Court to mend its ways and act within the Lakshman Rekha, the phrase which was earlier used by Rijiju for Supreme Court.

There are many similarities between the attack of Rijiju on Judiciary and word of caution for it from Dhankar. While sharing the dais with Chief Justice of India D Y Chandrachud at the 8th Dr L M Singhvi Memorial Lecture in New Delhi on December 2, Dhankar said it was “never too late to reflect”. He underlined the “primacy of the will of the people” and said “that power was undone” and “the world does not know of any such instance”, last month Rijiju had said that the Collegium system of appointing judges was “opaque” and “not accountable” and “alien” to the Constitution. Of course his remarks attracted the displeasure of the Supreme Court.

Dhankar pointed out that “democracy blossoms and flourishes when its three facets, the Legislature, the Judiciary and the Executive, scrupulously adhere to their respective domains” but he did not clarify that it is whose responsibility to recommend the names of judges for appointment.  Certainly this is not in the right and authority of executive.  Dhankar must have a look at his own observation; “Any incursion by one, however subtle, in the domain of the other, has the potential to upset the governance apple cart”.

Modi government owes an explanation to the country why it is adamant to curb the authority and power of the judiciary. No doubt parliament is the exclusive and ultimate determinative of the architecture of the Constitution but at the same time it cannot take away the rights and powers of judiciary and hand it over to executive. The question arises why is the Modi government to deprive the judiciary of its rights? Why has this acquired urgency?

It is worth mentioning that the parliament had passed the 99th Constitutional Amendment Bill paving way for the National Judicial Appointment Commission (NJAC). On August 13, 2014, the Lok Sabha unanimously voted in its favour with there being no abstention. The Rajya Sabha passed it on August 14, 2014. It is ought to be noted that the idea to have NJAC originated once Modi became the prime minister. This was undone by the Supreme Court on October 16, 2015 by a majority of 4:1 finding the same as not being in consonance with the judicially evolved doctrine of ‘Basic Structure’ of the Constitution.”

This step of Supreme Court certainly cannot be treated as severe compromise of parliamentary sovereignty and disregard of the mandate of the people of which this House and the Lok Sabha are custodians. Creation of NJAC was never an election agenda of BJP. Supreme Court must not have taken this step if the Modi government did not have made the efforts to grab the power of judiciary.

Chairman of the Law Commission had sent a letter on January 24, 1978, to the Minister of Law, Justice and Company Affairs containing his view (with which the Member-Secretary broadly agreed) regarding various points. The views of the Chairman were incorporated in ﬁve paragraphs which read as under “As the provisions of the Constitution stand at present, the appointment of an Informal Consultative Panel in connection with the appointment of Judges of the High Courts and the Supreme Court is of doubtful constitutional validity.”

It also mentioned that the Panel (or whatever be the name given to it: perhaps it would be better to call it Judges Appointment Committee or Judges Appointment Commission) should consist of: (a) Chief Justice of India (ex-ofﬁcio); (bl Minister of Law, Justice and Company Affairs (ex-ofﬁcio): and (c) three persons, each of whom has been Chief Justice or a Judge of the Supreme Court.

“The sitting Chief Justice should be the Chairman of the Panel. The Panel should express its views to the Government about the suitability of persons to be appointed as Judges and Chief Justices of the High Courts and the Supreme Court.”

It is needless to emphasise the importance of an independent judiciary. The basic postulate of democracy is that the adjudication of disputes both between citizen and citizen as also between the citizen and the State ought to proceed on the basis of law and not on extraneous considerations. Justice must be done. In case of India the principal function of the law is to protect the weak from the strong!

The intrusion of the government in the matter of appointment makes it crystal clear that its approach is of devious nature. It intends to turn the judiciary subservient and make it follow its diktats. Even today when the ultimate authority lies with the Supreme Court, the Modi government takes its own sweet time to keep hanging the appointment of judges for undesirable longer period. In some cases the wait makes a senior judge junior to the new entrant. The names which are sent later get priority while the names earlier have to wait for clearance.

Dhankar and Rijiju must realise that politics of coercion may not bear any fruitful result. It will simply put the government in a disadvantageous position. The image and charisma of Modi have already suffered a huge damage. His party BJP might have won the election of Gujarat, but it has lost its two bastions; Delhi Municipal Corporation and Himachal. Modi won Gujarat with Rahul Gandhi keeping aloof of the campaigning. He must read the verdict in its wider and perspective backdrop.

The Modi government must do away with the strategy to humiliate the judiciary through its slanging operation that the Collegium system of appointing judges is “opaque” and “not accountable”. By casting aspersion on the Supreme Court it was smearing its face and image amongst the people of the country. (IPA Service)