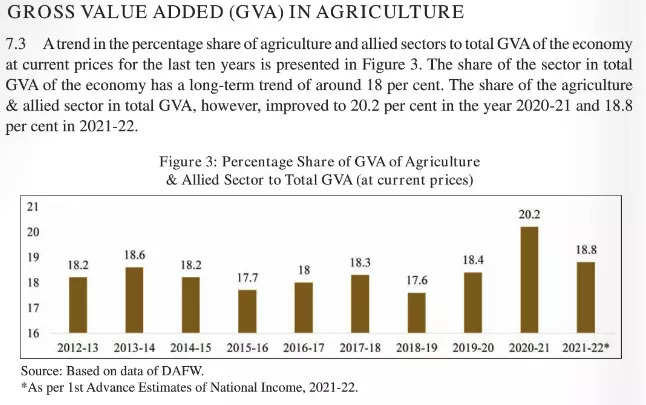 Driven by good performance compared to other sectors during the pandemic, agriculture has absorbed an additional 11 million workers over the last three years while the rest of the economy lost 15 million jobs, said the Centre for Monitoring Indian Economy (CMIE). Jobs apart, the question remains where does the surplus from the bumper crops gets accommodated.

This has been possible because of good monsoon, bumper production and higher prices, the CMIE said. It is a fact that even though there was a hike in prices in agricultural production, that hardly helped the rural producers. Life remained as hard as ever. With the bumper crops, difficulties for the farmers were not resolved as the market forces were not in their side. Situation remained grim and the migration rate was huge. There were the adversities, in 2019-20, and yet agriculture grew by 5.5 percent, while the non-agricultural sectors grew by a lower 3.5 percent. In 2020-21, agriculture grew by 3.3 per cent, though the rest of the economy shrunk by 6.3 per cent. In 2021-22, while economy was recovering from its deep fall, agriculture continued to grow by 3.3 per cent.

The industry and services sector, that constitutes more than 80 percent of the gross value added (GVA) in the country, provides employment to 54.4 percent of work force, and so far as agriculture is concerned that accounted for 18.19 percent of GVA in 2019-20, and retained 45.6 percent of the workforce.

Agriculture is one sector that has the highest number of people employed as agricultural workers, as high as 151 million in the financial year of 2021, despite the epidemic and lock down that had the extreme negative impact on the country’s GDP ratio. Agrarian sector was the only one that saw an increasing employment trend. With a year-on-year growth rate of 4.1 percent, the sector accounted for almost 40.9 percent of employment growth. Number of people employed in this sector, in millions in the financial year of 2021, was 151.79, for 2020, it was 145.88, for 2019, 143, for 2018, 143.83, and for 2017, it stood at 145.66.

As per census, 2011, conducted by the registrar general of India, the total number of agricultural workers in the country went up from 234.1 million, among them were included 127.3 million cultivators and 106.8 million agricultural workers. In recent years the share of agricultural workers has come down to 58.2 percent in 2000 and by 2011, it was 54.6 percent. Migration of rural to urban areas by the agricultural workers was one factor that took its toll in this shift. It was in fact a general phenomenon and natural in the development process. The reason for this shift was lure for better wages, employment opportunities, in industries and services as the graph of urbanisation was going up.  In a market economy like India has, the movement of people for better opportunities is inevitable. The food grain production kept up its high levels. During 2018-19, the production was estimated as 284.95 million tonnes (As per fourth advance estimates, 2018-19).

As per the seventh schedule of our Constitution, land comes under the purview of state government, and therefore it is on the state governments, to make efforts to increase cultivable land, and the Centre has to help the states through supplementing in crop development programmes. But in reality, the Centre is busy in acquiring land for its own vested interests. The purpose has been to serve the service and construction sector, and such non-productive areas that help the corporate sector to evolve. It is not the food grains they are interested in, the land in their hands turns into capital.

The contrast is obvious. There is the growth, even though restricted, there are haunting shadows too. The basics are kept intact. The surplus from the bumper production does not feed the hunger of those living at the bottom, their wages are still not even the minimum, while MSP remains a far cry.  (IPA Service)