India’s Public Debt Level Is Too High To Become Comfortable 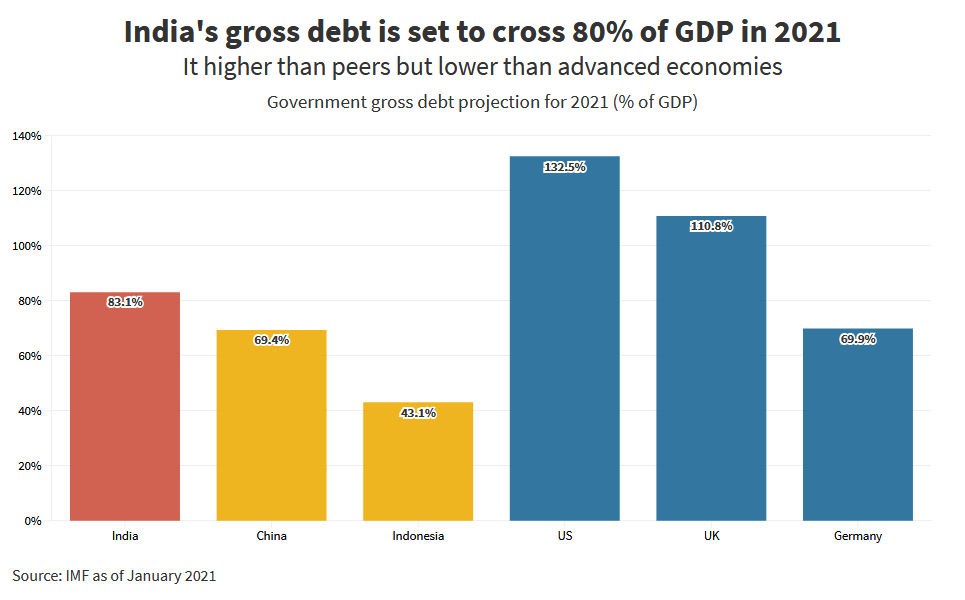 It is a matter of serious concern that India’s public debt level is among the highest in emerging economies while the country’s debt affordability is among the weakest. Generally, the average threshold limit prescribed for public debt-to-GDP ratio is 77 percent with each additional percentage point of debt costs 0.017 percentage points of annual real growth. The effect is even more pronounced in emerging markets where the threshold for debt-to-GDP ratio is preferred at 64 percent. India recorded a government debt-to-GDP ratio at 73.95 percent in 2020. According to Moody’s Investor Service, “with the exception of Chile, most of the 11 emerging markets have weak government effectiveness, suggesting potential risks executing fiscal reforms or consolidation plans.” The global rating agency further states that India’s (rated Baa3 negative) debt affordably is among the weakest alongside Ghana.  Across the 11 emerging markets, India, South Africa and Ghana have the highest public debt and weakest debt affordability,” the agency added.

Moody’s assessment of India’s debt affordability may be debated by official economists. But, few can contest the basic logic, linking government debt serviceability with the state of the economy. Some may cite that China’s debt is over 250 percent of its GDP, higher than that of the United States and lower than Japan. The US government’s debt-to-GDP ratio averaged 64.54 percent from 1940 to 2021. It reached an all time high of 137 percent of GDP in 2021. The ratio for Japan, the world’s most indebted advanced economy, was 224.8 percent of the country’s nominal GDP in December, 2021.

The Japan government’s debt-to-GDP ratio data, available from December 1994 to December 2021, is updated quarterly. The data reached an all-time high of 227.1 percent in March 2021 and a record low of 55.9 percent in Dec 1994. On the contrary, the public debt-to-GDP ratio of Germany, the advanced world’s third largest economy after the US and Japan, was only 69.3 percent, last year. It was still well over the Maastricht Treaty’s reference value of 60 percent. However, the fact is that the economies of the US, Japan, Germany and China are among the strongest in the world and few question their debt affordability. China is the world’s top exporting nation, followed by the US, Germany and Japan. They are also the world’s top four economies.

Unfortunately, despite its high economic potential, import-led India has been almost perpetually under expanding trade deficit and foreign borrowing. The country’s GDP growth has remained poor, especially in recent years. The real growth rate has been continuously down since 2016. The country’s GDP growth rate was in the negative in 2020 (-7.96 percent), showing a 12.01 percent decline from 2019. India’s GDP growth rate in 2019 was 4.04 percent, a 2.49 percent decline from the 2018 level of 6.53 percent.  The growth rate for 2018 showed a decline of 0.26 percent from 2017. India’s economic growth rate for 2017 was 6.80 percent, a decline of 1.46 percent from the 2016 level. Incidentally, India posted a 10.08 percent economic growth rate in 2006-07, the highest since the economic liberalisation in 1991.

It makes a rather sad commentary on the country’s economic performance in the last few years despite all the tall promises and groovy pictures of the economy made during the government’s annual budget presentation, year after year. India’s high public debt-to-GDP ratio would have been of little concern if the economy performed according to its potential and the country’s high trade imbalance was not on account of import of luxuries such as gold by the rich. The yellow metal accounts for India’s second largest item of import in terms of value after petroleum. Bullion merchants seem to have a vice-like grip over the government’s gold import policy. The rich prefer gold to government bonds for investment.

Last week, the government’s claim that the country’s GDP growth of 8.7 percent in 2021-22 as the highest in 22 years is totally misleading and, maybe, uncalled for. The fact is that the growth rate was calculated in terms of GDP in 2020-21, which was 6.6 percent in the negative over the previous year. Effectively, the real GDP might have grown by only 2.1 percent, the lowest in the last two decades. India’s GDP has contracted five times since 1947, but never as bad as in 2020-21, the pandemic year.

Incidentally, the RBI press release on ‘Monetary Policy Statement, 2021-22,’ on October 8, last, projected that India’s real GDP growth would be retained at 9.5 percent in 2021-22 consisting of 7.9 percent in Q2; 6.8 percent in Q3; and 6.1 percent in Q4 of 2021-22. The real GDP growth for Q1:2022-23 was projected at 17.2 percent. What happened to those RBI growth projections? Why is the government silent on them? It may be noted that global crude oil prices were rising even before the Russia-Ukraine war. In October, last year, the price of Brent crude was $83.54 per barrel. It was projected to go up to $120 per barrel during 2022. Government economists could not have ignored the global crude price trend while projecting India’s GDP growth prospects last year and this year.

Public borrowing itself is not a big issue as long as a country’s economy is vibrant and grows well in the right direction. High borrowing has not been a concern for governments of countries such as Japan, the US and China. India is not anywhere near that league. India’s debt affordability is poor as regarded by all global sovereign rating agencies. Few will disagree that the current government has failed to help improve the situation in the last four years. The government’s so-called ‘Make-in-India’ campaign has failed to achieve a  boisterous economic growth and contain imports and trade gaps, which reached record levels last year.

The Rupee is constantly weakening. On the other hand, RBI has totally failed to contain inflation, protect the purchasing power of Rupee and its exchange value vis-a-vis popular hard currencies such as US$, Euro and Japanese Yen. Both the government and RBI seem to be ignoring the fact that high debt-to-GDP ratios — above 64 percent in emerging economies — can actually hinder economic growth under debt service pressure. It can put a country at risk of defaulting on debts, creating havoc on its economy and financial markets. India must create enough wealth to improve its debt affordability. (IPA Service)

Indian products pulled out from shelves over Prophet remarks
Posting....