India’s GDP Growth Has Slowed Down But Overall, The Trends Are Positive 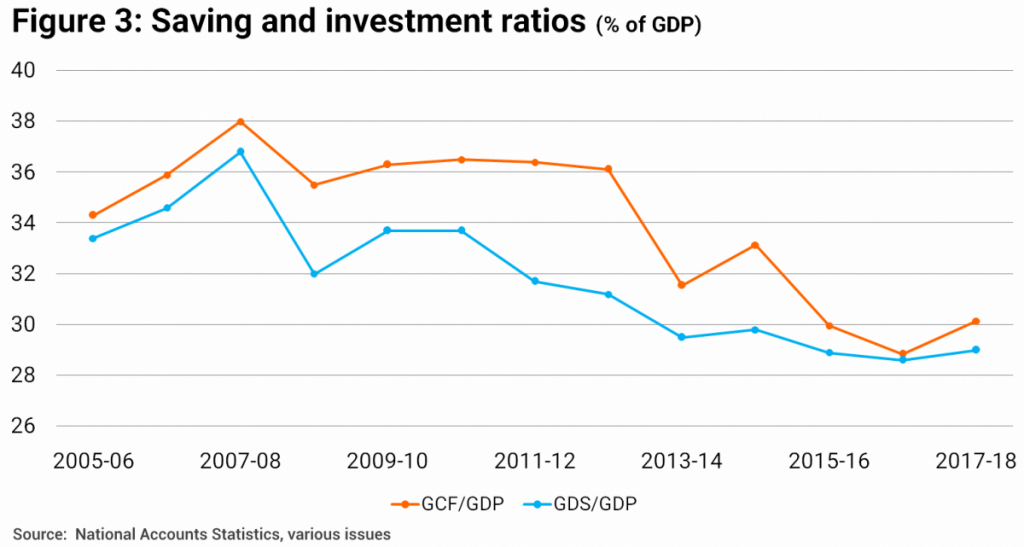 India’s economic growth might have dipped to 6.3 per cent in July-September quarter of this financial year but the good news is the slide is not going to be as pronounced in the whole year. The year 2022-23 may still end up with GDP growth of 6.5 to 7 per cent as forecast by India’s chief economic adviser V Anantha Nageswaran.  This has also been corroborated by former RBI Deputy Governor and renowned economist Rakesh Mohan, who said recently that if India achieved 6.3 per cent growth in the second quarter, there is every likelihood of it ending the year with GDP growth of 6.5 to 7 per cent, thereby meaning there is no validity in pessimistic growth projections of less than 6 per cent by some global rating agencies.

This however does not mean there are no concerns in the economy which required some tough decisions to fix them, which has become that much more difficult due to worsening global economic environment and geo-political situations. The comforting aspect of this second quarter growth, as Nageswaran says is that the economy is on road to recovery from pandemic and is growing faster than other countries, which are still struggling to find its feet.

This also indicated that the economy is on track for 6.8-7 per cent expansion in this fiscal year, though this appears to be slightly optimistic. At a little over Rs75 lakh crore, India’s GDP in the first half of 2022-23 was 5.7 per cent larger than comparable pre-covid level. So the dream of hastening the process to make India a $ five trillion economy has been pushed a little further. But none can deny the fact that in the current global economic situation, India is the only bright spot for sustaining high growth for a decade or two even though it could be bumpy in the immediate term.

Just as Covid provided some opportunity to push digitization, the next couple of year provides great opportunity for India to vigorously push job-oriented industries to reverse the jobless growth, that a populous India can ill-afford. There are lessons to be learnt from East Asian miracle countries. Be it Japan in the 1950s, South Korea or China later or Vietnam and Bangladesh at present, the economic success of these countries are attributed to expansion of labour-intensive industries. This lifted the living standards of poor and thereby creating self-generating demand to propel the economy.

India still needed to move at least 35 per cent of working age population from agriculture to other jobs. This can be achieved only through proper skilling and creating jobs in adjacent small town. This can happen only if labour-intensive industries are set up in semi-urban and rural areas like garments, leather, handlooms, food processing, railway and road projects. If these industries were to become export-oriented, then economies of scale will have to operate, which meant large units employing 20 to 30 thousand people have to be established as in China and elsewhere.

It is worthwhile to point out that MNREGA programmes, particularly in north and east India are acting as a disincentive for farm labour to move out of agriculture.

Unlike in Tamil Nadu, and to some extent Karnataka and Andhra, MNREGA workers do not put in more than two to three hours of work and yet they get Rs 250 per day. Tamil Nadu has recorded highest of 6 hours a day by MNREGA workers as against 2-3 hours in North India.

This meant MNREGA worker gets Rs 80 per hour in North India as against Rs 40 per hour in Tamil Nadu. As a result, the worker prefers to do MNREGA job rather that working in a tea shop or any other establishment where he has to work 8-10 hrs a day to earn the same amount. So there is no incentive for him to seek any other worthwhile occupation. This aspect needed to be seriously looked into so that surplus farm labour get adequately incentivized to move out of disguised unemployment in agriculture. One way could be to evolve better monitoring of outcomes of MNREGA programmes so that the scheme does not remain a mere dole.

The job creating industries will also ensure that more demand is created thereby encouraging more investments. Presently the biggest worry for the Indian economy is inflation, which is partly due to global factors. As former RBI governor C Rangarajan says, the Inflation at the moment cannot be tackled merely through monetary actions as it is not due to only excess demand in the economy. There are supply as well as global factors, which meant there has to be some well thought out fiscal measures as well. Inflation is here to stay for at least a year or so and in India it is partly expected to be driven by food and fuel inflation, thereby hitting the poor the hardest.

So this is the right time for government to push through incentives to encourage labour-intensive industries spread across the country. Money should not be a problem as banks have adequate liquidity at the moment. With global recovery still a couple of years away, the government could utilize this time to build the much-needed infrastructure like road, rail and ports so that connectivity is established when global economy starts recovery to facilitate exports. Another area, which needed to be seriously looked at is tourism.

This too is a labour-intensive industry. India has a huge untapped potential. Huge investments are required in this sector in cleaning up and beautification of heritage sites dotting all over the country. Besides, necessary infrastructure like hotels, transport and connectivity have to be established to attract tourists from all over the world apart from domestic. Sadly, this is one area which has not been tapped well unlike some other countries. Tourism could be job and money spinner apart from earning valuable foreign exchange. There is need to evolve a comprehensive strategy and establish full time department and minister both at the centre and states for tapping this potential.

In sum the economic situation is not as gloomy as made out to be and if steered well, it could turn out to India’s decade or two. There is certainly some validity in predictions like India could become $30 trillion economy by 2047, when it celebrates centenary of its independence. Stepping up both public and private investments and improving ease of doing business are critical components. (IPA Service)