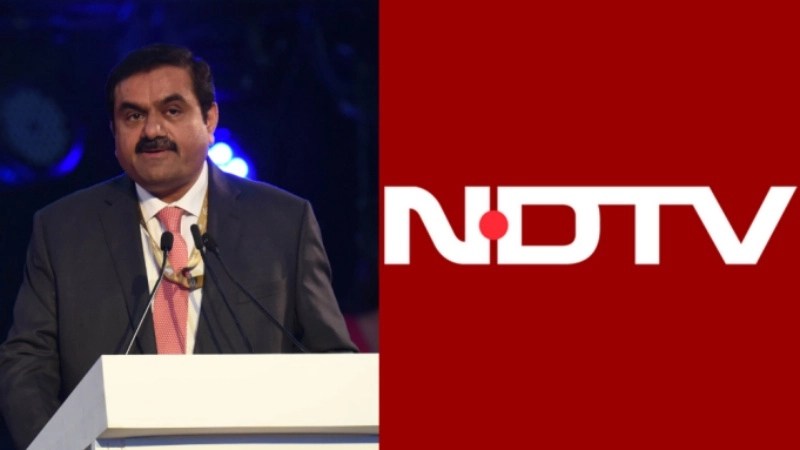 Too much has been spoken and written about how the Adani Group juggled shares and equity, whatever they might mean to the common layman, to snatch ownership of NDTV and run away with it such that it became the hottest story among a bevy.  ‘O! No.’ said an anti-Modi aficionado of the news cycle. ‘Yeah, yup’, said his pal on the other side of the aisle, the whoop he let out threatening to turn into a nasty fit of whooping cough.

NDTV slipping into the hands of a “corporate” isn’t a surprise. The news was already there making headlines. A lot of media in the country had already gone corporate much before Adani thought of owning and running an ‘Indian Al Jazeera’. The Ambani Group has a big slice of the media pizza. And this trend of acquiring media accentuated after 2014 following the Modi takeover of the central government, reinforced with a repeat takeover in 2019.

Encore! Nobody spoke that loudly, except that the idea of the ‘Godi Media’ got entrenched all the more. And in the midst of this sea of ‘Aye Aye Sir’, NDTV stood out, refusing to go under the slipstream. From 2014 on, NDTV was the rebel, a channel ready to expose the wrongdoings of the Modi government. Quite famously, it banished an extremely voluble BJP spokesperson.

To the left-liberal ecosystem, NDTV was the preferred television news broadcaster, its Hindi news channel gaining iconic status in Uttar Pradesh and Bihar, the so-called Hindi belt of India, which is characterized by what is called the ‘Ganga-Jamuna Tehzeeb’, a throwback to when Hindus and Muslims would have fought to the last man but for the tacit truce to live in mutual tolerance called the ‘Ganga-Jamuna Tehzeeb’.

Not unsurprisingly, among all television media, NDTV was the first and only TV news channel with the greatest affinity to the ‘Ganga-Jamuna Tehzeeb’, on some days finding more acceptance in Urdu-speaking Pakistan than in Hindi-guzzling Hindustan.  Pakistani politicians never tired of praising the NDTV style of journalism. Even Pakistani terrorists, with AK-47s dipped in ink, were profusely indebted to NDTV’s “honest and truthful reporting”, which occasionally even put India’s national interests at risk.

Again, not surprisingly, the gun-wielding home-grown Kashmiri “militant” was always ready to share a bite with NDTV journalists. Teacher’s son Burhan Wani, for one, whose encounter-killing and funeral got top billing with the channel. In fact, if Burhan got terror-icon status, it was because of NDTV and its journalists, reporters who climbed barricades and braved stones to report from the terror-recruiting fields of the Kashmir Valley.

Hereafter, after the NDTV-takeover, Kashmir and Kashmiris will miss the ‘old NDTV’ now that there is a ‘new NDTV’, which after a pregnant interregnum will, say insiders aware of the changes happening to NDTV, witness metamorphosis of a kind never witnessed in media circles of India. NDTV will undergo a gene-mapping exercise that will turn it into a world-beater.

There is already talk that the ‘new NDTV’ will exploit the old NDTV’s worldwide reputation of being India’s “most authentic and most authoritative Indian voice in the media space” to the fullest. NDTV comes with the dual advantage of acceptance outside India and acceptance within India. And corporate culture is not diehard this or that ideology, it will look at the pros and cons.

Till as long as the Modi-Shah juggernaut keeps winning elections, much of the so-called Godi media, now also including the ‘new NDTV’, will run along in tacit understanding, but only so far, and only for so long. For now, people are still trying to make sense of the dynamics of the transfer of power; how “it was planned”, and how it was executed.

Are the Roys, Prannoy and Radhika, out for good, they still have hold of over 31 percent of the shares? The Adani Group has launched an open offer for 26 percent shares over and above the 29.18 per cent stake the group has in NDTV Ltd. In theory the Roys are and can be still in the fray, but Gautam Adani is the richest Indian and it’s unlikely that he will buckle or give up. The man has set his eyes on becoming a Rupert Murdoch and the Gujaratis seldom fail in enterprise.

Gautam Adani had just a couple of days ago asked Prannoy Roy to stay on and run the NDTV like he is used to, stating that the “NDTV purchase was a responsibility and not a business opportunity”. Take that with a pinch of salt. Gautam Adani is part of the crony capitalist fold that has got Prime Minister Narendra Modi’s back and vice versa. The gloom in the anti-Modi camp is all over social media. It’s like somebody died. (IPA Service)

BJP’s Campaign For Gujarat Polls Has Turned Vicious And Toxic