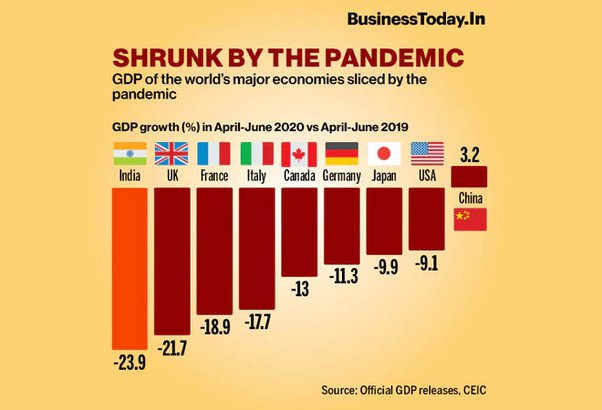 It is a no brainer that India’s economic growth would look impressive after a virtual shut down in the previous year due to Covid Pandemic. But the question to be asked is the double digit growth is good enough and to the desired level and are their worrying factors in the economy?  One need not be naysayers and spread gloom all over but it is undisputable that there are worrying factors in the economy that has every chance of pulling down the growth momentum as the economy chugs along in the current financial year.

The data released by the National Statistical Organisation for the first quarter of financial year 2022-23 estimated the gross domestic product at 13.5 per cent as compared to the previous year. This double-digit growth is no doubt impressive but one should not forget the fact that this is mainly due to the economic recovery that was taking place after Covid that virtually shut down the economy in the same quarter last year. This is deceptively high level, given the base effect. April-June 2021 witnessed the second wave of the coronavirus epidemic, which raged through the entire country. In such a scenario the growth rate of 13.5 per cent is in fact a clear disappointment. Most expectations were for quarterly GDP growth in the 15-16 per cent range year on year.

The National Statistical Office, which is under the Union Ministry of Statistics & Programme Implementation, has released its estimates for gross domestic product (GDP) in the first quarter (Q1) of this fiscal year, 2022-23. The headline number is that GDP at constant prices in the first quarter showed 13.5 per cent growth year on year. This is a deceptively high level, given the base effect. It needs to be remembered that the equivalent quarter of the previous year, April-June 2021, was when the devastating second wave of the coronavirus epidemic was raging through the country. Even though there was no national lockdown as draconian as that observed during the first wave in 2020, activity nevertheless slowed considerably as a consequence of the high mortality and sickness. Given the base effect, the growth rate of 13.5 per cent is in fact a clear disappointment. Most expectations were for quarterly GDP growth in the 15-16 per cent range year on year. Rating agency ICRA has projected 15.7 per cent.

Crisil chief economist Dharmakirti Joshi has cautioned that the next few quarters will see slower growth as the base effect wanes. While the ongoing broad basing of domestic economic activity is supportive, the key risks is slowing global growth, which would curb India’s exports and create uncertainty in private capex plans. These would put downward pressure on our GDP growth forecast of 7.3 per cent for the whole of current fiscal year.

RBI Governor Shaktikanta Das had said that the real GDP growth for Q1 of Fiscal Year 2023-24 is projected at 6.7%. So there is no need to be gung ho about the first quarter double digit growth, which is an aberration. Also RBI had forecast a growth of 16.2 per cent in the first quarter and it turned out be much lower despite the base effect, which is not a welcome development.

What is worrying  is “nominal GDP or GDP at current prices in q1 2022-23 is estimated at Rs 64.95 lakh crore as against Rs 51.27 lakh crore in Q1 2021-22, a growth of 26.7 per cent”. This meant WPI inflation is as high as 14.2 per cent, which is not sustainable. One often quotes consumer price Inflation which is around 7 per cent. This is what is worrying. High WPI, which reflects the real price pressure on the economy, is not good. Also because of the difficult geo-political situation and slowing global growth and high global inflation, India’s exports are bound to slow down. This will certainly impact Indian economy which has now started looking up.

Achieving 7-8 per cent GDP growth this financial year may not indicate returning to high growth path. India, which is just a trillion dollar economy, growing at 10 per cent annually on a sustained basis is not enough to catch up with China’s growth, now a $18 trillion. Even a 4-5 per cent growth in China in this difficult situation add more to its economy For example India growing at 10 per cent can add only $300 billion in one year. Whereas a five per cent growth by China adds $900 billion to its economy. So even at 5 per cent growth of China against 10 per cent growth of India adds three times more to the economy. So India needs to do a lot of catching up and one should not get carried away by this statistics. Hence a 13.5 per cent growth in first quarter is good but it is not something to be elated about as the Indian economy has a long way to go to become a developed economy. (IPA Service)

Inflation Is Being Controlled At The Expense Of Working Class
Posting....