Indian Wheat Shipment To Kabul Through Pakistan Finally Gets Moving 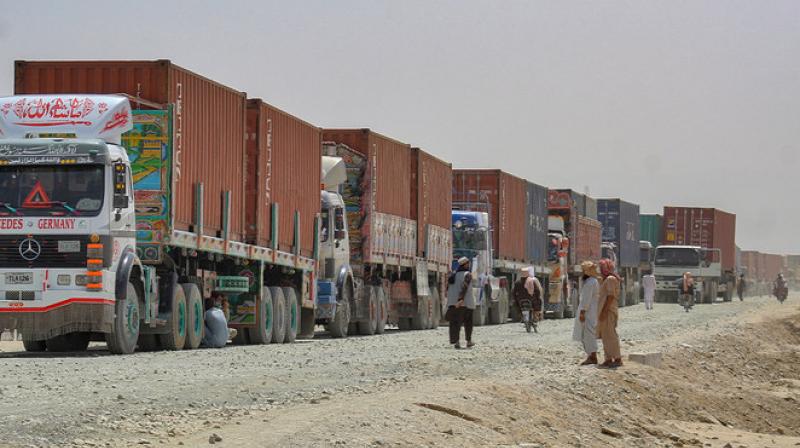 In a major development that indicates that rational forces are back at work, Pakistan has allowed the shipment of 50,000 tonnes of wheat from India to Afghanistan. Diplomatic sources revealed this in Islamabad on February 14 and hoped that the transportation of wheat to Afghanistan which is reeling under an acute food crisis would begin from next week.

Afghanistan is under Taliban rule since August 15, 2021, and India has not recognized the new regime, stressing the need for a more inclusive government. But India has offered to provide humanitarian aid to Afghanistan which has slid into an economic crisis after the unruly Taliban takeover. The crisis has been further accentuated by the failure of winter crops that has put about 23 million of the 60 million Afghanistan population in an acute hunger crisis, warranting immediate relief.

The Indian proposal to provide emergency food relief to Afghanistan through Pakistani territory was communicated to Pakistan as early as October 7 last year but Pakistan’s approval came on November 24. It took one-and-a-half months for Pakistan to give its nod to a few hundred trucks from India to cross through Pakistan up to the Afghanistan border.

Does this show a lack of intent or capacity on the part of Pakistan is anybody’s guess. But an answer seems to be available in Pakistan Prime Minister Imran Khan’s bemoaning of its bureaucracy widely reported in Pakistan media on February 11. He said he formed the government to bring “revolutionary changes” but he is not able to do so because the “system was incapable of absorbing shock.” He was venting his angst against the bureaucracy.

Well, let’s see what happened to India’s request to use Pakistan territory to transport 50,000 tonnes of wheat to Afghanistan.

When transportation details were being finalized, Pakistan wanted Pakistani trucks to be used from the Wagah border to Afghanistan border under the UN banner. India proposed using either Indian or Afghan trucks. In the final agreement, Pakistan has conceded to the Indian request and has allowed the use of Afghan trucks. Diplomatic sources said that necessary details had been shared by both sides and the shipment of emergency food grains will start moving from next week.

India had asked Pakistan to allow it to use Pakistani road space to supply unrestricted humanitarian aid to Afghanistan. But that seems to be a far cry if the delay in working out details for the wheat shipment is anything to go by.

As per the agreement, India should complete the shipment within 30 days since the first consignment crosses the Wagah border. India has partnered with UN World Food Programme to distribute wheat to hunger-struck Afghan people.

The distance from the Wagah border in India’s Punjab to the nearest Afghan border on the Durand Line is less than 450 km and to the Afghan capital, Kabul, only 821 km. If emergency food relief took 4 months to cross this distance in today’s time because Pakistan could not say a whole-hearted Yes, Pakistan must look within.

This brings us to the angst and frustration of Pakistan Prime Minister Imran Khan who wanted to bring revolutionary changes but could not get his initiatives moving because of an indifferent and callous bureaucracy.

The 69-year-old Khan’s popularity and claim to the top job of a country of 220 million people rest on a Cricket World Cup, a cancer hospital in Lahore and now also in Peshawar, and his flamboyant personal life. A true blue-blood, Imran Khan has had the best of what a life on planet on earth can offer – palatial homes, foreign education, poster-boy of international cricket, a heartthrob, and now the prime minister.

Why a former fast-bowler and captain of a cricket team that brought home a world cricket cup is not able to inspire the bureaucracy to get lightning-fast?

If we look at some of the ablest administrators in this part of the globe, we see they have come through the grind – a former tea-seller as the Prime Minister and a single lady capable of a 60-day long fast unto death to stop a $2000-car dream as her challenger. Yes, we are talking about Narendra Modi and Mamata Banerjee.

It’s not easy to manage unruly and uneducated masses on the one hand and well-entrenched bureaucrats and power centres on the other. It takes real grit and gumption to lead the people whose priorities and aspirations are as varied as the number of people.

It’s not for nothing that Mahatma Gandhi dropped his barrister’s robe and clad himself in self-spun dhoti. The road to greatness and a place in the glorious chapters of history need commitment and resolve, above anything else. No one has the strength to force the moment to its crisis after tea and cakes and ices.

Yes, the elite Pakistan Prime Minister needs to read TS Eliot a few times to know the real side of our times. He needs to get his hands dirty. He needs to read The Love Song of J. Alfred Prufrock to understand why Pakistan is the way it is. After that, he will have his way with the stubborn bureaucracy. Not doing so will leave all of us short of achieving what we could have achieved as a region. After all, there used to be a direct road link between Delhi to Kabul!  (IPA Service)

Kerala LDF Govt Has To Ensure Proper Climate For Business In The State
Posting....