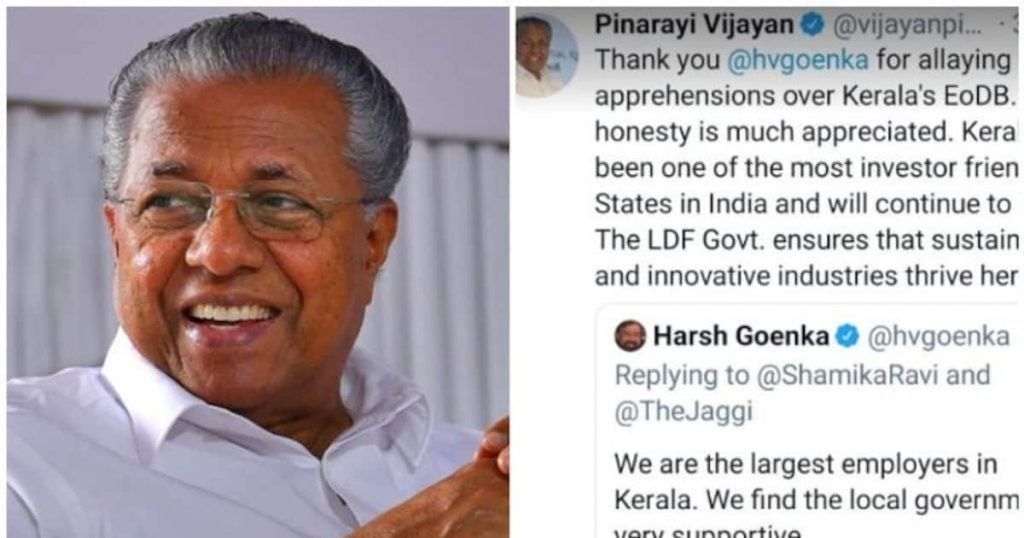 THIRUVANANTHAPURAM: It is a strange paradox. While the Pinarayi Vijayan-led Left Democratic Front (LDF) Government is pulling out all the stops to woo investors, the Centre of Indian Trade Unions (CITU), affiliated to the CPI(M),  is indulging in acts which effectively undermine the Government’s efforts.

Two instances which took place in the State in quick succession illustrate the point.   A hardware shop in Kannur district had to shut down within six months of its opening. The reason: CITU workers, angered by the denial of permission to handle goods coming to the shop, disrupted its functioning. Rabeeh Muhammad, owner of SR Associates, Mathamangalam, near Payyannur in Kannur district, alleged that CITU workers had been agitating against him for the last two months. The proximate cause for the agitation: Rabeeh had managed to secure an order from the High Court for loading and unloading of goods at the shop with his own workers.  According to Rabeeh, customers stopped coming to the shop because the CITU workers, who had erected a shed in front of the shop, threatened them. This being the situation, Rabeeh had no option but to shut shop.

Rabeeh’s cup of woe is full to the brim. He had been functioning from a rented building, and he had invested around Rs 70 lakh on the business. Although Rabeeh had lodged a complaint with the police against the harassment, nothing favourable has been done so far.

Labour Minister V. Sivankutty, however, has a different take on the matter.  The Minister would have us believe that the closure was not due to a labour dispute. It was the result of a notice served by the panchayat. Though the owner had licence for only one shop, he was running as many as three shops! Hence the notice for closure of the unlicensed shops, contended the Minister. The minister, however, admitted that the CITU had been on an agitation for the past two months. If there were any complaints against the trade union, it would be examined and action taken, said Sivankutty.

On his part, Rabeeh has denied that there is a complaint against him.  All that has happened is that he has received a notice from the panchayat seeking an explanation for the use of more space than permitted for the shop.  “I have been asked to rectify it, and if there is any anomaly, I shall reply,” claimed Rabeeh. Significantly, Panchayat Secretary K Ramani has supported Rabeeh’s claim.

Why is the CITU not allowing Rabeeh to function? The reason given by CITU Peringome area secretary MP Damodaran is that the trade union has no intention to force the shop’s closure.  The CITU is only demanding job protection to the workers. The CITU, he said, has a responsibility to ensure work for its members. The workers would be in great difficulty if all shop owners started using their own workers for loading and unloading work. That was unacceptable, he said, adding that the issue will be resolved through talks. The past record is, however, anything but positive.  Several rounds of talks between Rabeeh and CITU leaders in the presence of Payyannur DYSP K E Premachandran have failed to produce results.

As if this was not enough, another young entrepreneur is considering closure of his shop, which started functioning only three weeks ago at Madayi, again in Kannur district! Here again, CITU is the ‘villain of the piece’.  Mohanlal TV, had opened a shop called Sree Porkkali Steels at Madayi on January 23. Some customers had come in the initial days, the CITU workers threatened them, said Mohanlal.  Mohanlal further claimed that he had informed the CITU in advance that he would be using his own workers for the loading and unloading work. The CITU did not raise any objections then, said Mohanlal. But once he started stocking things in the shop, the trade union laid a siege and prevented people from coming to the shop.

President of CITU, Madayi area, has a different tale to tell.  The strike, he contended, is to protect the jobs of their workers. The CITU tried to strike a compromise. But Mohanlal was not in a mood for conciliation.  An aggrieved Mohanlal has moved the High Court seeking protection for his business.

Whatever the truth, one thing is for sure. The two incidents have reinforced the stereotype of Kerala being an investor-hostile state. This is a luxury the LDF Government cannot afford at a time when it is trying its level best to erase the impression of Kerala being a state which is not conducive to investment – an impression created by the decision of Kitex company to stop investments in the State and go to the neighbouring Telangana state. Unless the Government intervenes quickly and takes expeditious steps to set things right, all the efforts being undertaken to ensure an investor-friendly environment in the State will go in vain. There is no time to lose. The Government must swing into action now. (IPA Service)

Covid Intensity Has Certainly Eased In India But Precautions Must Remain
Posting....