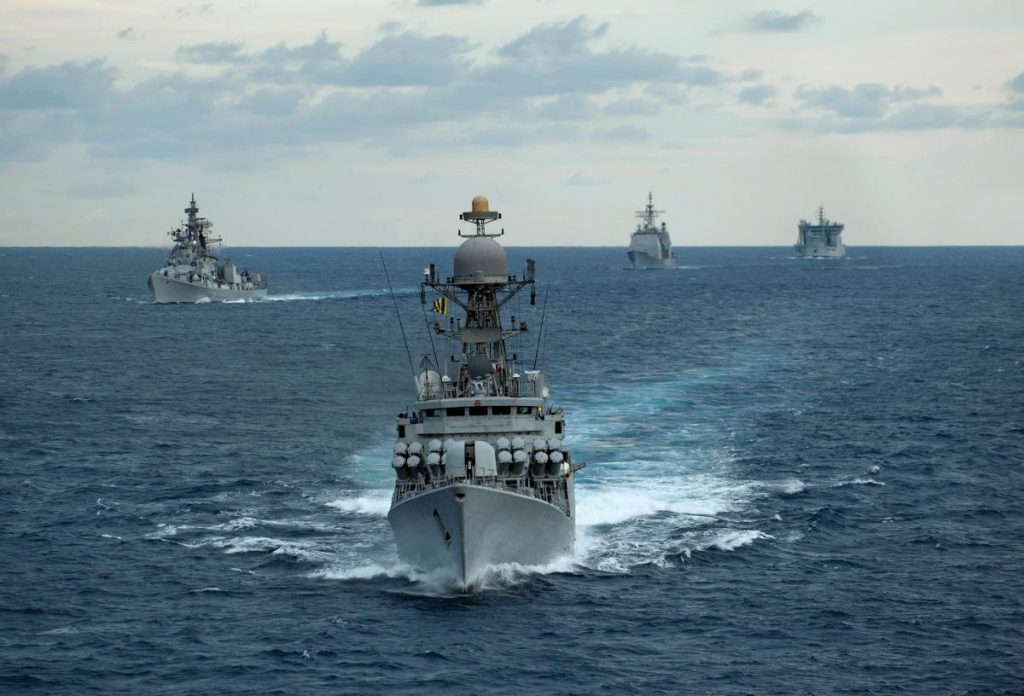 By Ashok B Sharma

Indian Navy has become active in the Indo-Pacific Region following government’s focus in the region with emphasis on its Act East Policy. It convened a three-day Indo-Pacific Regional Dialogue 2022 (IPRD 2022) in New Delhi from November 23, this year, in which there were participants from stakeholders in the region. It dealt with all aspects of the Blue Economy.

The IPRD-2022, organised by the National Maritime Foundation (NMF) as the Indian Navy’s knowledge partner and was attended by over 800 participants, including delegates from twenty friendly foreign countries and international organisations.

Based on the overarching theme of “Operationalising the Indo-Pacific Oceans Initiative” (IPOI), the IPRD 2022 explored sub-themes that could provide a greater degree of specificity and traction to the seven ‘pillars’ or ‘spokes’ of the IPOI.

The event witnessed active participation from senior officials from the Indian Armed Forces, Ministry of Shipping, Ministry of Environment, Forest and Climate Change, senior representatives from Indian industry, diplomatic representatives from missions in India, the academia and eminent scholars and experts from abroad.  In addition, about 2000 uniformed personnel and veterans, eminent citizens and students from renowned universities in Delhi NCR attended the event over the three days.

The IPRD was conducted in three thematic sessions, which focused on three specific ‘pillars’ or ‘spokes’ of the IPOI namely, “Trade, Connectivity and Maritime Transport”, “Capacity Building and Resource Sharing”, and “Maritime Resources”.

The first session was based on the theme: “Building Maritime Connectivity: Ports, Trade and Transport”. The session included a special address by Dr Sanjeev Ranjan, Secretary to the Government of India, Ministry of Ports, Shipping and Waterways, who outlined India’s approach in building maritime connectivity. Perspectives from the ASEAN, Australia, India and Sri Lanka were also discussed during the session.

The next session was conducted on the theme “Capacity-Building and Capability Enhancement: Leveraging the Physical and Social Sciences” which commenced with a special address by Dr M Ravichandran, Secretary, Ministry of Earth Sciences, Government of India.  Dr Ravichandran emphasised that science and scientific research is a key element of the architecture of any ocean economy aspiring to be increasingly ‘Blue’, both at the national and regional level. He also laid stress upon the symbiotic relationship between the social and the physical sciences. The other speakers in the session presented views from the ASEAN, Israel, India, Japan and Chinese Taipei.

The third session of the day began with a special address by the Union Minister for Environment, Forests and Climate Change, Bhupender Yadav who is also concurrently the Minister of Labour and Employment. After the special address, the e minister released a book entitled “Transitioning from a ‘Brown’ to a ‘Blue’ Economy in the Face of Climate Change”, published by the National Maritime Foundation.

This session, on the theme “Practical Approachs to a Regional Blue Economy (With Particular Focus on Ecologically-Sensitive Harvesting of Marine Resources), included speakers from Thailand, Kenya, France, Indonesia, and the United Nations Development Programme (UNDP).

The final day of the IPRD comprised three sessions.  In the first session, aptly termed the ‘Margdarshan’ session, The Chief of the Naval Staff, Admiral R Hari Kumar, said that the IPRD represented the Samvad or ‘Dialogue’ aspect of the 5 Ss– Samman, Samvad, Sahyog, Shanti, and Samridhi as enunciated by Prime Minister Modi.  He also reaffirmed the Indian Navy’s committed resolve in preserving the nation’s maritime interests adding that the IPRD was instrumental in evolving a shared approach towards regional maritime security. The Navy Chief said that the IPOI leveraged the uniting nature of the oceans through two key elements of ‘holistic approach’ and ‘inclusivity’.

Giving a succinct summation of the proceedings of the last two days, Admiral R Hari Kumar brought out the key issues that had been articulated by distinguished speakers, which included Union Minister Bhupender Yadav and Minister of State for Defence, Ajay Bhatt.  He added that over the last two days, which witnessed deliberations by speakers from 17 countries and international organisations, there was a unanimous agreement that the Indo-Pacific was emerging as the economic and military centre of gravity in global affairs.

The Union Defence Minister Rajnath Singh in his Keynote Address, said that the IPRD was a significant platform for exchange of ideas on enhancing cooperation in the Indo-Pacific. He reiterated India’s vision of a free, open and inclusive Indo-Pacific, and India’s faith in multilateralism and regionalism; and, of her principled commitment to rule of law. Stating that the ASEAN was central to the Indo-Pacific, he referred to two recent initiatives – the ‘India-ASEAN Initiative on Marine Plastic Pollution’ and the ‘India-ASEAN Initiative for Women in UN Peace Keeping Operations’.

Invoking India’s rich maritime tradition and heritage, the Hon’ble minister emphasised the importance of the oceans for India’s growth, prosperity and security, as also for that of the Indo-Pacific. Rajnath Singh said that in today’s deeply interconnected world, security was a collective enterprise. Alluding to India’s faith in an elevated sense of shared security, he gave the example of the COVID-19 pandemic, which gave an opportunity to India to demonstrate her concept of the world as an extended family, or Vasudhaiva Kutumbakam, through Op SAMUDRA SETU and Vaccine Maitri initiative.

The Defence Minister said that in today’s complex geopolitical environment, national security could not be considered a zero-sum game, and that a ‘multi-aligned policy’ was the only pragmatic solution to global security concerns. In conclusion, the Hon’ble minister expressed his appreciation towards the Indian Navy and the National Maritime Foundation for organising the Indo-Pacific Regional Dialogue 2022. The Hon’ble Minister also released a book, published by the National Maritime Foundation, titled “Coastal Security Dimensions of Maritime Security”.

The second session was on the theme of “Disaster Risk-Reduction and Management: Solutions for Small Island Developing States (SIDS) and Vulnerable Littoral States”, which brought together perspectives from Bangladesh, France, India, Maldives, and the Coalition for Disaster Resilient Infrastructure (CDRI). The session also highlighted the vulnerability of low-lying islands and littorals in the Indo-Pacific to the effects of climate change and the urgent need for devising collective and collaborative strategies to mitigate the same. The session was moderated by Vice Admiral Dinesh K Tripathi, Chief of Personnel, Indian Navy. In his remarks as the moderator, Vice Admiral Dinesh K Tripathi brought out the key issues emerging from the session. These included the threat of inundation of low lying areas, triggered by rise in sea level due to climate change; the increase in incidences of natural disasters such as cyclones and droughts; and aspects related to disaster management and mitigation, wherein he alluded to India’s disaster management set-up.

The final session commenced with the Valedictory Address, in which Vice Admiral G Ashok Kumar (Retd), the National Maritime Security Coordinator, touched upon issues impacting maritime security in the Indo-Pacific such as inter-agency coordination, the importance of information sharing in enhancing Maritime Domain Awareness and also certain challenges such as problems in enforcement of rules and maritime disputes. The valedictory address was followed by release of a book entitled “Public International Maritime Law”, published by the National Maritime Foundation.

The IPRD 2022 culminated with the closing address by Vice Admiral SN Ghormade, the Vice Chief of the Naval Staff, in which he recounted the diverse tapestry of the Indo-Pacific comprising the political, social, economic, and military aspects that emerged during the vibrant three-day discussions.  Vice Admiral Ghormade laid stress upon the need to leverage the rich diversity within the Indo-Pacific and be more imaginative in arriving at solutions to problems affecting the Indo-Pacific. He also summarised the key takeaways of the event, such as a wider interpretation and understanding of the Blue Economy, and the fact that there were several issues of concern, such as the lack of proper management and regulation of fish stocks, which if unaddressed, could potentially emerge as disasters in the future. Concluding his remarks, Vice Admiral Ghormade acknowledged the effort by the National Maritime Foundation in organising the IPRD and also thanked all participants for their contribution towards an invigorating and intellectually stimulating dialogue. (IPA Service)